I will donate 1/2 the SBD payout of this song to @openmic.

Check out @meno's post "We are the open mic" to learn more about the #ilovetheopenmic hashtag. Open Mic has recently lost some funding and has had to cut back prize payouts. This contest deserves community support! It is one of the best things on Steem blockchain bar none!

You can make your own post in support of Open Mic under this hashtag and either set @openmic as a beneficiary to the post (described in @meno's post linked above), or, and this is what I recommend, just pledge 50% of the SBD payout on the post to @openmic. Beneficiary rewards are paid out in SP and come off the total post payout before the author reward is split into SP and SBD, so beneficiary rewards actually reduce the total payout value of the post (SBD is worth considerably more than $1 right now so shrinking the portion of the post that gets split into half SBD is not a good idea).

It has been a while since I last recorded an open mic, so I thought I would just write a quick love song to Open Mic as my show of support :)

We Are Open Mic

This was basically improvised over a loose structure, I had done a few takes earlier so I had worked out some lyrical themes but didn't have the lyrics nailed down or anything. I still took the time to write out the particular lyrics I sang on this take, just for you ;)

We Are Open Mic - lyrics

Open Mic I hope you stick around,
I would be so heartbroken if you left me on my own

Open Mic I hope you stick around,
Steemit would be so boring without your lovely sounds

Open Mic I hope you stick around,
Steemit would be so boring without your lovely sounds

I tried out a new way of recording myself doing a loop performance and I am happy with the results. I took a snapshot of the recording setup: 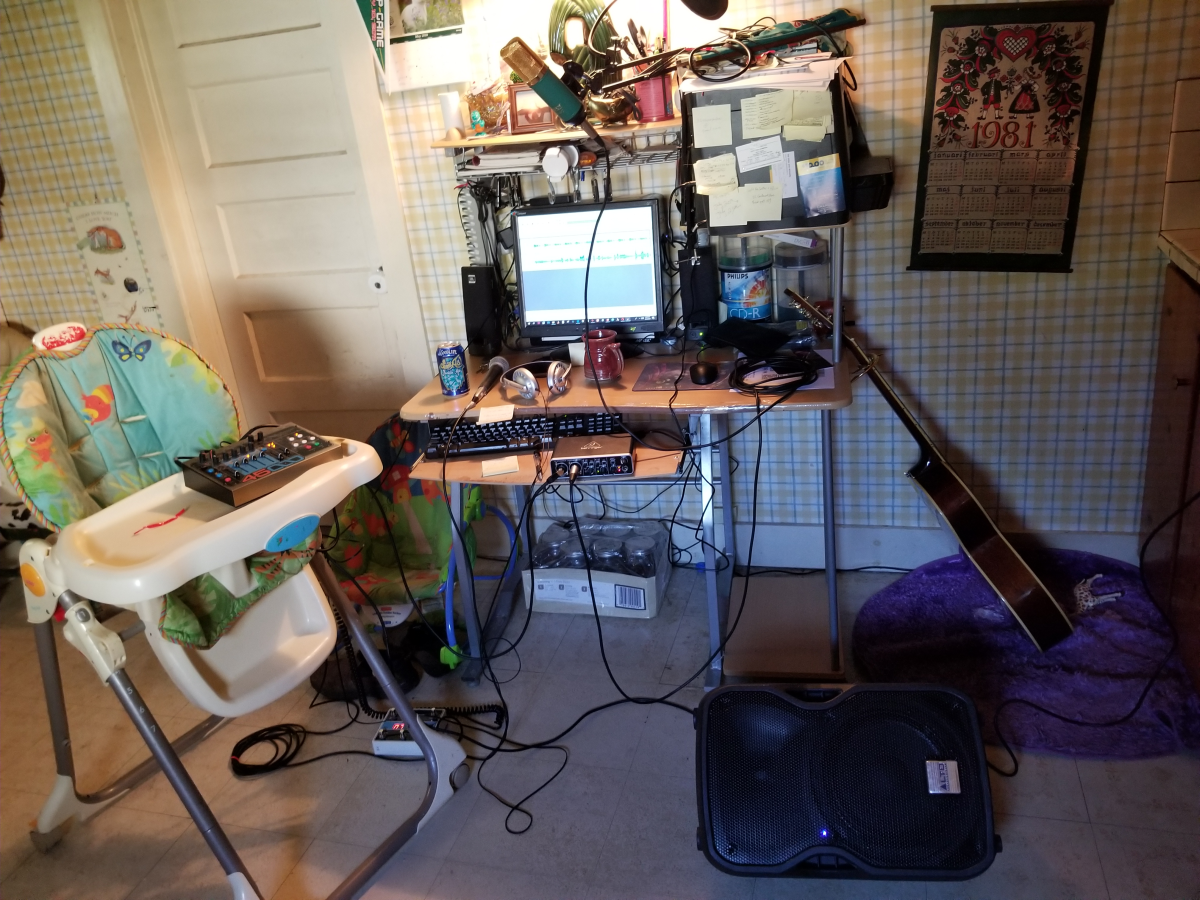 I ran a line out from my electro-harmonix looper to one of my monitors, which I angled up to fill the room behind me with sound. I had an overhead condensor mic to pick up my lead vocals and of course it picked up some of the monitor in the room (yes @markangeltrueman that is the Markrophone in action :)

I panned the looper line out 20% to the left and panned the overhead condensor mic 20% to the right and I think it gives a nice full sound. I will be using this same setup in the future for looping recording so I wanted to document the process here for future reference :)

I got real kick out this performance. Very entertaining.

Thanks for contributing. All rewards go to support @openmic. That's weird. Very few cocks in this one.

Yeah. Really, just one. But sometimes one cock is all you need (shhhh don't tell everyone in my cock room!)

oh you snuck one in? nice.

Crap, somebody changed the old known Carl by a brand new younger handsome Carl! (but with the same voice)

So great this song!

The earthlings are on to us! Replicant #6522's cover is blown! Pull back! Lt. Zarg, remember to eviscerate the body molders. They have clearly failed at the detail work here. Promote the voice modelers, they are apparently the only ones who know what they are doing!

Thank you Carl... if you rocked any harder you would be a Geologists wet dream.

Ha ha nice one @meno :) Thanks! This one came together very quick and easy, I had a great cause for good inspiration :)

This is the most wonderful and ridiculous thing I have seen in a long time. YES TO THIS.

Shoot this isn't even the most ri-dick-ulous song I recorded this week!

Sounds like you have gotten the hang of the looper. Pretty good for improv.

Thanks dude :) I have spent a lot of time with the looper

YESSSS hahaah who needs to bother with the interpersonal drama of a quartet when you have you infinite loop capabilities! Also, I thought your last name was "Gnash", probably a common mistake lol

Somehow I still manage to get into band squabbles anyway LOL Yeah "G" is my middle initial, but the good thing is "Gnash" and "Nash" are pronounced the same anyway so really you weren't all the way wrong :)

Dude, you're dating yourself with the doo-wap resonance... haha... This is nonetheless quintessential Carl - and that's a really good thing! Love this, man! You rock, brother! Much love! .x

The PNW loves the classics 😂

First of all im so jealous of your looper 😭😭 ive wanted one for ages.

Third every group should hVe an acapella theme song!!

Yassss a cappella for the win

Ear worm alert. Is this how you aliens are going to take over this planet, by seducing us with this melodic genius? Great to see the markrophone in action!

i love how the high chair blends seemlessly into your studio arrangement..

Thanks! They are actually super convenient for that :) LOL

HA, I'm really grinning after that one.

I really need me a decent sampler/loop machine. What is yours? Looks fun.

Its all about the stroller helping out the recording process , need a bit of real life in the creative process

Awesomeness you are truly a renaissance man, too many cools for your continued support of this great global competition @carlgnash it looks like you may have even trimmed your beard for it ;9) Love the doo-wop 50's kinda groove

Well this was pretty amazing Carl.. I knew you had it in you, since i listened to your song with Mark, but i didnt expect this. Pretty impressively original and well thought out. Extremely catchy.. Woopi doopi doopi doop. :D And thx for the contribution..

We think alike actually haha. Im also donating all the SBD payout from my post on "Case for enlightened self interest on Steem"... Fill up that reward pool. its at 74$ atm i think...

Its just wonderful how people can come together and lift up a project that means so damn much to all of us. LOVE IT!!!!!!! :D

I loveeeeeeed it!!! and, such a good iniciative too!! Congrats!

Very, very creative. I did NOT expect your voice to sound like that. Requesting a reggae version.

What did you expect my voice to sound like? LOL

Was expecting something more along the lines of a cross between Otis Redding, Sting and Enya.

Love that photograph where that giraffe is chilling and you fully utilize the use of that high chair as a studio rack mount.