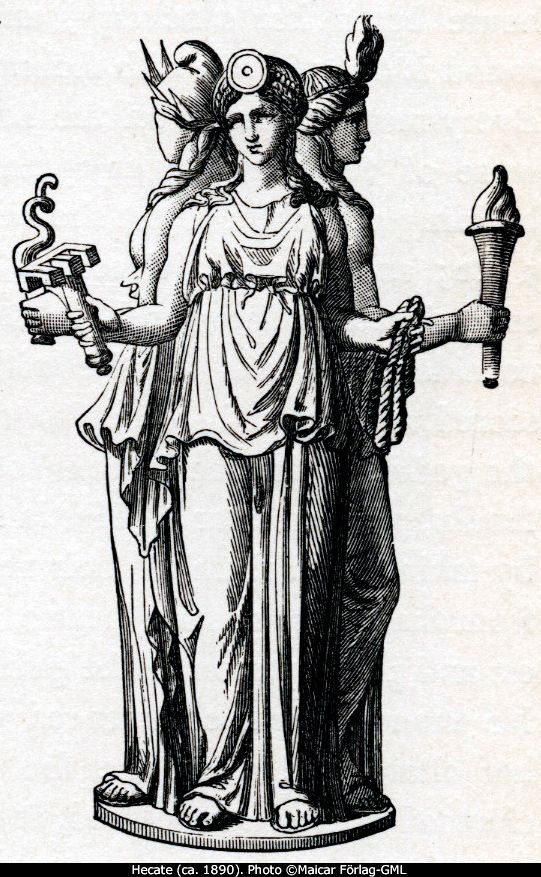 Come to me, O beloved mistress, Three-faced
Selene; kindly hear my sacred chants;
Night’s ornament, young, bringing light to mortals,
O child of morn who ride upon fierce bulls,
O queen who drive your car on equal course
With Helios, who with the triple forms
Of triple Graces dance in revel with
The stars. You’re Justice and the Moira’s threads:
Klotho and Lachesis and Atropos
Three-headed, you’re Persephone, Megaira,
Allekto, many-formed, who arm your hands
With dreaded, murky lamps, who shake your locks
Of fearful serpents on your brow, who sound
The roar of bulls out from your mouths, whose womb
Is decked out with the scales of creeping things,
With pois’nous rows of serpents down the back,
Bound down your backs with horrifying chains
Night-Crier, bull-faced, loving solitude,
Bull-headed, you have eyes of bulls, the voice
Of dogs; you hide your forms in shanks of lions,
Your ankle is wolf-shaped, fierce dogs are dear
To you, wherefore they call you Hekate,
Many-named, Mene, cleaving air just like
Dart-shooter Artemis, Persephone,
Shooter of deer, night shining, triple-sounding,
Triple-headed, triple-voiced Selene
Triple-pointed, triple-faced, triple-necked,
And goddess of the triple ways, who hold
Untiring flaming fire in triple baskets,
And you who oft frequent the triple way
And rule the triple decades, unto me
Who’m calling you be gracious and with kindness
Give heed, you who protect the spacious world
At night, before whom daimons quake in fear
And gods immortal tremble, goddess who
Exalt men, you of many names, who bear
Fair offspring, bull-eyed, horned, mother of gods
And men, and Nature, Mother of all things,
For you frequent Olympos, and the broad
And boundless chasm you traverse. Beginning
And end are you, and you alone rule all.
For all things are from you, and in you do
All things, Eternal one, come to their end.
As everlasting band around your temples
You wear great Kronos’ chains, unbreakable
And unremovable, and you hold in
Your hands a golden scepter. Letters ‘round
Your scepter Kronos wrote himself and gave
To you to wear that all things stay steadfast:
Subduer and subdued, mankind’s subduer,
And force-subduer; Chaos, too, you rule.
ARARACHARARA ÊPHTHISIKÊRE.
Hail, goddess, and attend your epithets,
I burn for you this spice, O child of Zeus,
Dart-shooter, heav’nly one, goddess of harbors,
Who roam the mountains, goddess of crossroads,
O nether and nocturnal, and infernal,
Goddess of dark, quiet and frightful one,
O you who have your meal amid the graves,
Night, Darkness, broad Chaos: Necessity
Hard to escape are you; you’re Moira and
Erinys, torment, Justice and Destroyer,
And you keep Kerberos in chains, with scales
Of serpents are you dark, O you with hair
Of serpents, serpent-girded, who drink blood,
Who bring death and destruction, and who feast
On hearts, flesh eater, who devour those dead
Untimely, and you who make grief resound
And spread madness, come to my sacrifices,
And now for me do you fulfill this matter.

Offering for the rite: For doing good, offer storax, myrrh, sage, frankincense, a fruit pit. But for doing harm, offer magical material of a dog and a dappled goat (or in a similar way, of a virgin untimely dead).
Protective charm for the rite: Take a loadstone and on it have carved a three-faced Hekate. And let the middle face be that of a maiden wearing horns, and the left face that of a dog, and the one on the right that of a goat. After the carving is done, clean with natron and water, and dip in the blood of one who has died a violent death. Then make a food offering to it and say the same spell at the time of the ritual.

"ARARACHARARA ÊPHTHISIKÊRE"
This expression is very intriguing to me. It looks like a formula. Is there any translation?
Kind regards.

These are most likely barbaric names the Greeks used in this system of antiquity, much like ceremonial magicians used to today. Many of the barbaric names seem to be harnessing the power of the letters more than the names themselves.