The history of my ancestors are back with a new astonishing feat.
Although the Vikings were fearless raiders, plunderers and conquerers. They also were great tradesmen and their ships of trade could be found from the shores of England all the way to the Kalifat of Bagdad.
They traded with fure, wool, amber, ivory walrus tusks, fish and many other goods that was common in the north and highly appreciated in the south of Europe and the middel east.
In return they brought back things like silk, spices, pottery, fruits and more.

A reconstruction of Kaupang, the first capitol in Norway in he 800th century and an important trading platform 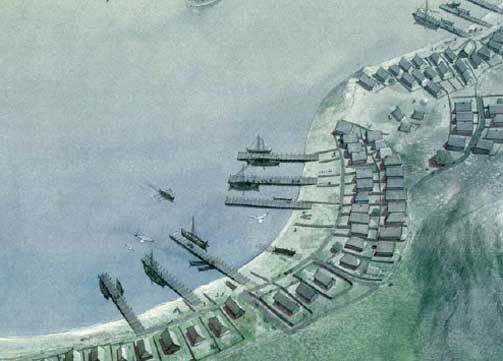 The vikings founded a lot of citys all across Europe because of their trading network and some of them are large, important citys up to this day. Two of the most famous are probably Dublin and York.
Here the vikings could be safe from other vikings as well as they had a place to stay during the winter months when the storms at sea were to hard to ride. We can divide the vikings in to three groups in the viking era. The Norwegians, the Danish and the Swedes even though the Scandinavian peninsula with Denmark included were ruled by a lot of small kingdoms in the start of the period the people in the different areas seemed to travel in different directions when it came to trade.
While the Norwegian often went to England and the south of Europe the Swedes seems to like the Russian part better and therefor used the rivers in east Europe as gateways for their trade.

Here you can see the trade routs and attack routs, that also functioned as trade routs. Sorry for not finding a map in English. 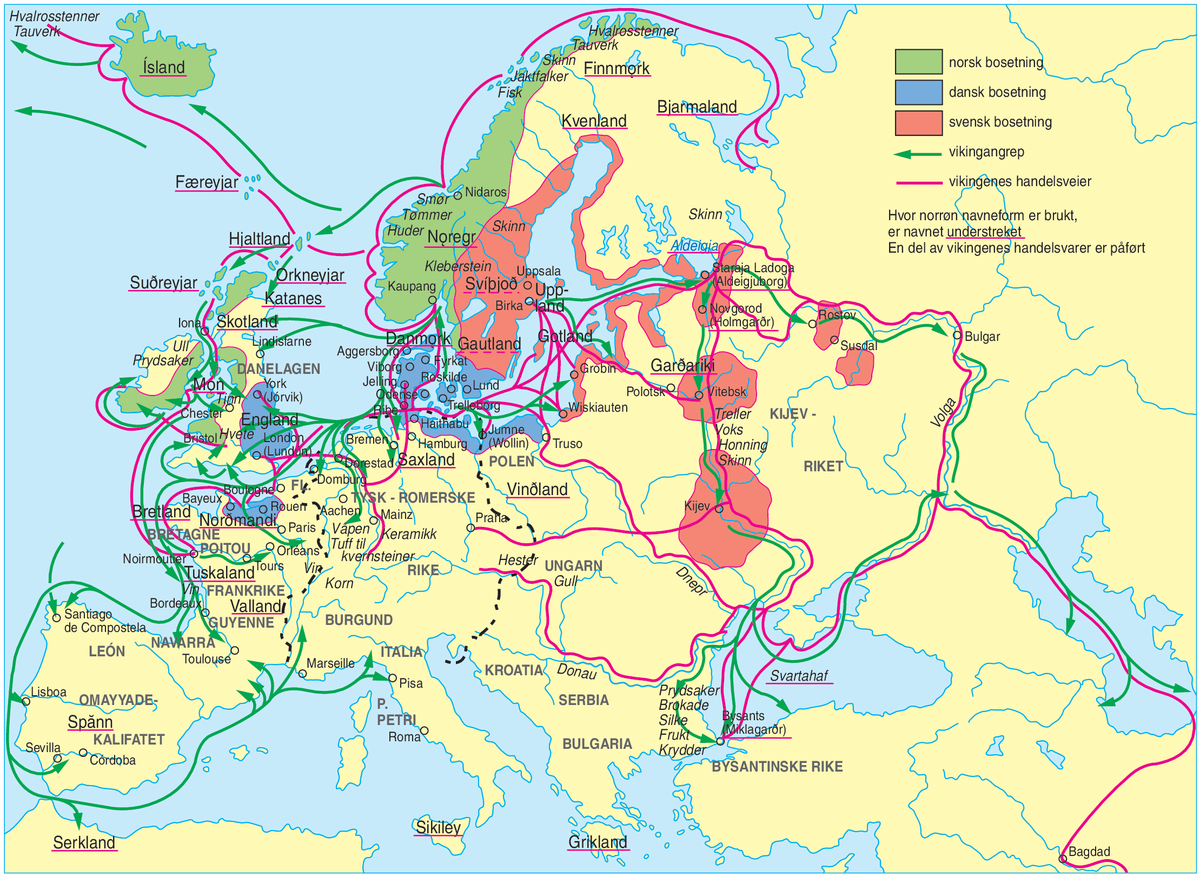 As we see out of this map the vikings were at the center of the kalifat of Bagdad and even further south on the continent.
It is even speculated that the vikings may have ran into the top of the Chinese empire, but this has yet to be properly confirmed.
From findings we can be sure that the whole of Europe had visitation from the vikings both from trades and raids.
And we can just imagining what kind of terror it was to see a viking sail in the horizon before you knew if it was come for trading or plunder. Besides trading with different kind of goods the vikings also traded with slaves. These slaves could bee taken from the British island and sold either back home in Scandinavia or in the middel east, where the light skin were appreciated amongst the leaders in the Arabic world.
And the trade of slaves also went the other way where people from the middel east were sold in the north.
But, the vikings also traded them self to other great leaders in the Arabic world and we now for sure that the Kalif in the Byzantium empire had hired Vikings as his personal bodyguard.

In the map above you also can see large colored spots and this is where the Vikings made their own settlements and introduced their own viking law with a viking king on the throne.
The green is Norwegian kingdoms, the read are Swedish and the blue are the Danes. But e have to remember in that in the Viking era it was no bounders between the vikings so they all in one way or the other collaborate to get their means fulfilled.
And that is one of the reasons they could put their mark on Europe in such a huge prevalence.

Hope you enjoyed the part 5 of the viking history, to read part 4 click here.

First very welcome back to the steemit community.
Publishing a Viking post proves that you have recovered well.

From what I read about the Vikings (your ancestors mr @gyldenhorn) after reading your post showed me they were really out of the ordinary people and they had abnormal abilities.

Below an excerpt of what I read about the Vikings.

The Vikings are considered excellent navigators because they have traveled all European seas and beyond and they have traveled the rivers of Western Europe and Russia. This expansion would not have been possible without the quality of the ships they were building.
In addition to their knowledge of the sea The Vikings did not use a compass or compass but Scandinavian sagas recount a "mysterious stone" which allowed the captain to use it as a navigational instrument even in cloudy weather: by pointing it to Zenith, he could find the direction of the sun. This "sunstone" could actually be an Icelandic spar (Iceland), a transparent crystalline crystal that is relatively common in Scandinavia and has the property of depolarizing sunlight, filtering it differently depending on the score. They did not have cards. At night, they could use the polar star to keep a course and day, rely on the height of the sun to estimate their latitude. It is especially the observation of the sea, landmarks and marine animals that allowed them to find their way on the open sea.

Again perfect recovery and see you in the next episode of the vikings history.
Regards.
@aminekad

Thank you very much @Aminekad. I am starting to feel a bit better so now I am hopefully back on track :)
And it is like you say in your comment here, the vikings were probably the people that had the best skills in navigating the seas during their period.
There are found a lot of sunstones around in Scandinavia so they were probably in use on every ship.

This subject is fundamental a very fundamental part of the viking culture and therefore of Norway! It's very nice that you are sharing this is information with use which is very useful for people like me who really enjoy knowing and learning about other cultures.

I think for those arabs, the viking slaves resulted to be more useful than the other, because of the fact that they are taller, bigger and stronger, as far as I know Norwegians are known for being big and string people. What I don't understand is how Vikings resisted the warm weather of middle east countries, that are known for being very warm and sunny, because I have seen there in Norway it snows A LOT! it's very cold, a doubt that maybe you can answer hehe :)

Hi @ralk98
Good to hear that you get something out of reading my post :)

I dont think there were many vikings slaves, but vikings that took slaves form other countries in Europe such as England and France and sold those people to the arabs. But, the vikings served as bodyguards for some of the rich sultans and how they endured the warm weather I am not sure of. But, I guess they adapted in some way :)

Oh, now it's clear for me, I misundertood a bit hehe. I'm actually learning a lot with this series about vikings, gonna read the next one right away!

Exceptionally well written. After reading this post i will definitely read the other four part.Always admire your unconditional love for your homeland. Eagerly waiting for the next part.

Thx a lot @Pijon.
It is like you say, I have unconditional love form my country :)

At that time many Europeans were controlled by the Franks empire. Perhaps therefore, the Vikings moved like ocean waves looting these areas.

Although this nation is known as a raiding nation, but they are also a nation of merchants and settlers, and affect the way of life in various countries across the continent of Europe.

In addition, they are also a nation that works hard for their needs. Their agricultural commodities are whole grains and wheat made into bread, and porridge. In addition, they also raise sheep, cattle, goats, pigs, chickens, and other livestock.

In the trade sector, the Vikings are known to be reliable shipbuilders and sailors.

Hello @Seha76
Thank you for bringing some update about the vikings with your comment. I really appreciate it!
I love to read about the ancient civilizations because I think there is a lot we can learn form them.
But, I agree, riding a Harley is more cool :)

Hi @gyldenhorn
After I read the story of the history of a group of vikings, which is part of three different parts of the nation, I am amazed, they become important figures in the eyes of the world, in commerce, to be bodyguards at Byzantium Empire.
Thank you for sharing this amazing history story. :)

Hi @Amuchtar
Thx for commenting on my post. I will soon come with a new on on the vikings.
Thx for reading :)

A very interesting article with a very extraordinary language.

I remember school time, we had learned about the Viking tribe famous for the nation of merchants, cultivators, and most famous as pirates.

People are very afraid of the brutality of the Vikings because they are reluctant to kill both children and women.

The Vikings were also very good at making ships. I think the ability was so amazing at the time.

Please permit to ask, Sir! "Why the Vikings except merchants, but they do robbery?"

Thank you for something extraordinary.
Regards @gyldenhorn!

Hi @Roman-sabil and thx a lot for reading my post!
To your questions if I understood it correctly:
The vikings were both merchants and robbers/plunders. Sometime they saw it fit to do trading with others when they could benefit form it, and other times, when they for example needed land, they went on a raiding party.
We also have to remember that the viking culture were hard and they had other believes than the people elsewhere in Europe

Thank you Sir to answer a beautiful. greetings!

I found the part about the slave trade pretty interesting, it seems over here in the United States with our history and slave trade with the black man that everybody has forgot that slavery was more white people when you look out throughout history.

Hi @Tbnf4sun
It is true that when you look back in time a lot of white people were sold as slaves. And a lot of them were sold to the Arabic world but also amongst the other countries in Europe. It is not before we "discovered" Africa the trades with the lokal africans started in a large scale.
Luckily all this has stopped now :)

Every word of your mind, you wrote very well. Hopefully you'll be giving us a good post like this.
I would like to say you keep it up and well done.

good content on vikings..
Slavery is the hard work on the life spending time,,,,
i dislike the work while forcing man becoming slave...
thanks for sharing
@gyldenhorn

The Vikings were extraordinary adventurers!
The best navigators of their time.
I think it's quite possible that they're going to the Asian empire.
I also heard that they may have reached even North America,
who knows ? Legends or historical fact, it leaves dreamer ...

Never been interested in Vikings, only movies about them there are. But you opened this subject with other hand

Great, I was already wondering what had happened with this good series about the Vikings.

What you say is true, the Vikings also traded, in fact, I read once, that some Viking tribes were practically pushed to plunder, because they had forbidden trade with them.