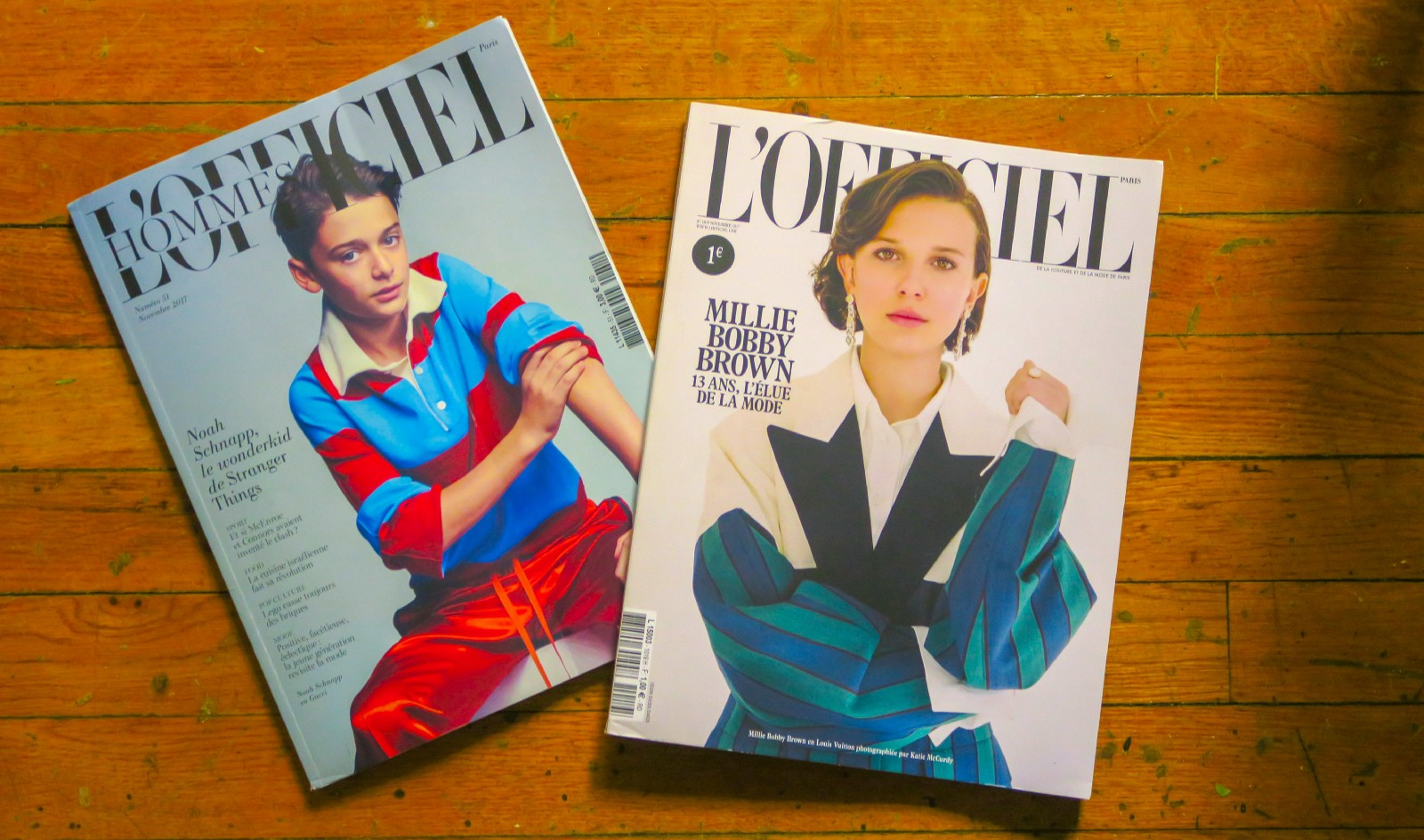 Note: this the English translation of a story I wrote for the French fashion magazine L’Officiel Hommes.

Noah Schnapp looks out of the darkness of his trailer and wonders if anyone knows that his birthday is today. “Everybody forgot my birthday” is of course the great teenage fear from the iconic eighties Molly Ringwald movie Sixteen Candles. But the busy young actor almost did it to himself. Noah — who will turn 10 at midnight — is far too young to know the movie from 1984. Noah is used to waking up to his birthday, but tonight he will have to stay up for it, since he is on set and they are shooting a night scene. This is a big birthday for Noah, one he and his friends look forward to as a huge milestone. “It’s a big one,” he says. “Double digits.”

When Noah gets older these important moments from his life will fade as they do for all of us. The nostalgia of the moment will exist somewhere between his grownup self and his younger self. The Netflix Series Stranger Things — like the upcoming Steven Spielberg adaptation of the eighties pop culture novel Ready Player One and a hundred Buzzfeed lists — exists on the line between the thought and the object of nostalgia. The cultural touchstones want you to remember your childhood in a series of discontinued objects and toys. They know when you hear the powering-up of the old 8bit Super Mario Brothers you remember playing the game.

But the sense of nostalgia is anchored to what the game represented. Playing an Italian plumber chasing mushrooms and renegade turtles meant school’s out for the day or hanging out with friends. Just as finding candy from your childhood doesn’t represent your nutritional needs, but the anticipation of a treat. Marcel Proust’s madeleine cookie took him — quite by surprise — back to carefree Sunday mornings with Aunt Léonie.

When grown people track down old Nintendo GameBoy controllers on eBay they chase after a long forgotten childhood feeling of anticipation. Of the days when the excitement of your life still laid ahead. Of a grownup need to dominate the things you once had no control over.

Back in the trailer the soon-to-be 10 year old Noah doesn’t yet know what “double digits” has in store for him. He doesn’t know that Spies will go on to win an Oscar. Or that within a year he will embark on a totally unique Netflix original series that takes place almost entirely in the nostalgia zone.

Childhood nostalgia allows a grownup to try and remember what it was like to be a kid again. And when we remember this we rarely think of how interminably slow the clocks ran at our elementary schools, how walking down the halls filled us with anxiety, how utterly trashy our favorite TV shows were. The grownup video gamer knows that he or she could afford a top of the line virtual reality video game system. But no one tracks down a GameBoy from 1992 for the graphics.

The children of Stranger Things are some of the most honestly drawn children in the history of moving images. Their scifi-realist universe exists almost entirely without adults. Which is great because the best parts of childhood — and yes that includes time spent playing video games and eating sugary snacks and playing in the woods — are devoid of adults.

The story of how this all went down in just a few short years still leaves him, at 12, with an enviable career. Noah’s parents put him and his sister in a local music/theater program. Their teacher soon connected Noah with an agent. There were TV commercial castings (“meatball commercials” as he says) and soon things picked up. First landing the voiceover role in Charlie Brown. During that same time Noah had auditioned for the role of Mike Wheeler (a role which went to Finn Wolfhard) but never heard back. It was for a strange series about a group of kids looking for their missing friend Will.
During the summer, though, Noah went off to summercamp to be a kid again. He has gone for five years now, back when he was just an 8 year old kid. 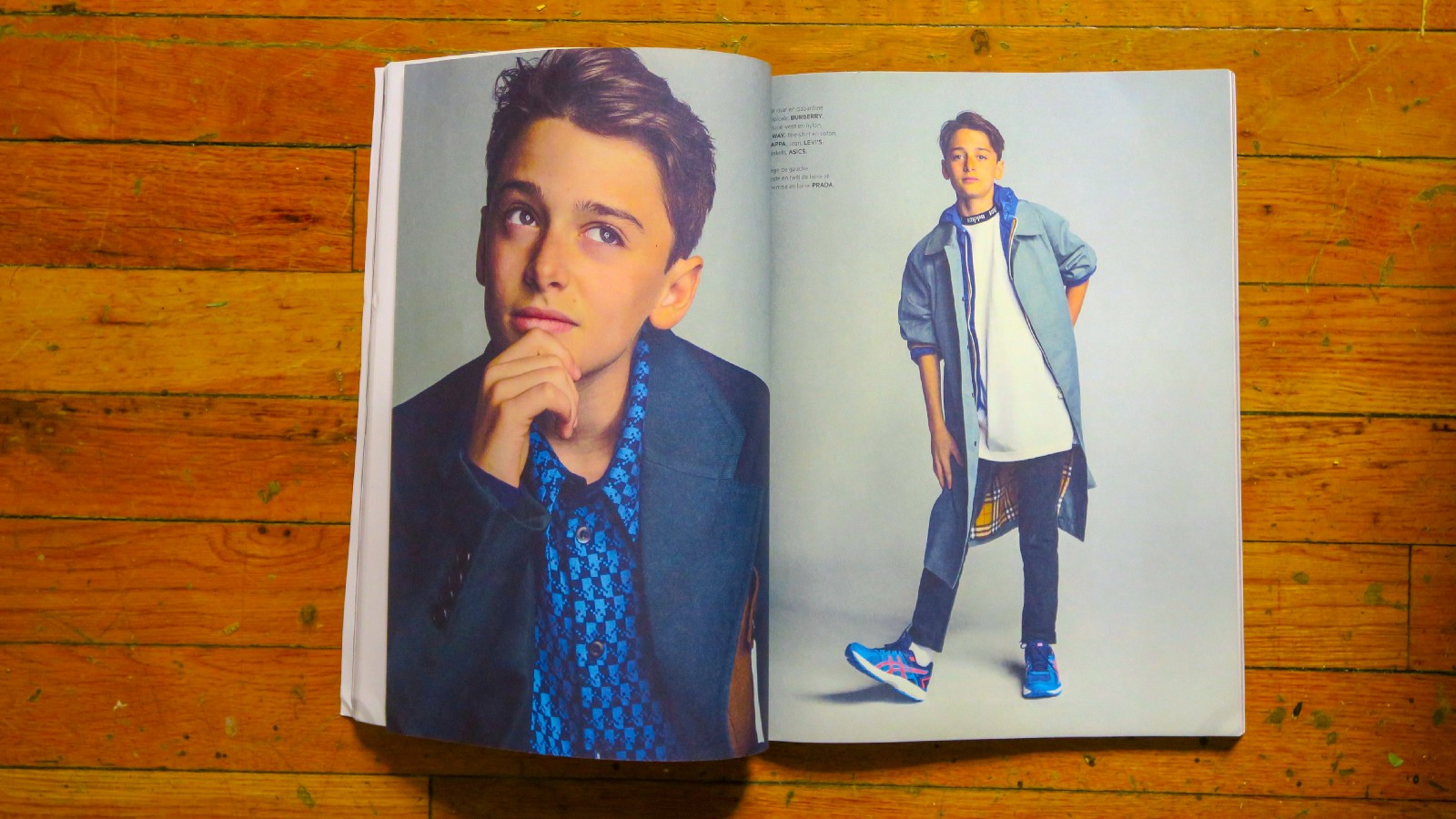 In the age of smartphones, camps stay perfectly in the nostalgia zone. Outdoors, fresh-air, letter writing. Their lone concession to the modern world is that you’re allowed 3 phone calls home during the summer. “And the last one my parents said there was somebody who wanted to talk to me. They clicked over the phone and then these two guys are on the line.”

They connected him to Matt and Ross Duffer, the thirtysomething identical twin directors who created Stranger Things.

They said, “We wanted to tell you that you got the role of Will!”

“And I was like, ‘For what?’” It slowly dawned on Noah that these two were serious and he was being offered an incredible role on his first TV show. “For the rest of the day I just had this massive smile on my face.”

Noah brings that naiveté, the kid-plucked-right-out-of-summer-camp feeling to the role. (In Atlanta, they all do have a life somewhat like the suburban kids of old movies, he and onset buddy Caleb).

Behind the scenes the kids put in a full work day. (Noah, Caleb and the newest cast member Sadie have one tutor who works fulltime with them just to teach them French). They get up each day at their rented homes in Atlanta and then go “bank” school hours — studying long with one of three private tutors so that if filming goes long on another day they don’t “miss” school.

When we think of “child actors” we almost always mean the Disney TV show, Lindsey Lohan types. The ones who walk in a soundstage and smile and the laugh track applauds. Or the kinds of deafening screams that followed a teenage Justin Bieber. The kids of Stranger Things all have this attitude that they are there to work and to learn how to be better actors from the grownups around them. “That’s why working with Wynona is the best.”

Still, their set is basically a haunted house. Noah turns red when recalling the day the Duffer brothers finally aced the monster sounds. In a now-famous scene Will is supposed to hang up the phone and run out of the house when he hears a scary sound. The assumption is that the movie magic will happen later and they will add sound effects and monster noises, “I didn’t realize but there was a massive speaker right next to me. I was in the middle of the scene. I’m in my own world and then they pressed play and this monster-sized sound leaps out from next to me. It freaked me out because I was so in the scene when I dropped the phone. It was a real reaction. I was really actually scared.”

For a young actor, though, the scarier thing is the parts you don’t know. What if out of all the four kids, you’re the only one who can’t do the deep, emotional scenes? Luckily for the scarier things: they have Wynona Ryder on set as his mom.
“I remember they had this really hard scene and it was crazy it was long and it was an emotional scene for like my character. So I asked her — ” Meaning Wynona. He is on a first-name basis with Wynona Ryder. “Can I like talk to you about this and you can go over with me and help me? And she totally understood it. ‘I’d love to help you.’ And she she came in an hour earlier the next day and she brought me to her trailer and she sat me down with her.”

That scene, by the way, is what guaranteed them a Season Two. When Noah’s character goes missing in Season One, it gives the audience a feeling of loss. It’s like when you’re a kid and you want to run off with your friends and you get lost in the woods. Noah without the safety of being at home with Wynona leaves the audience feeling incomplete.

It’s a bit like the little kid who tosses three hotdogs in a lunchbox and announces to no one, “I’m running away from home!” and they get three steps out the door and sniffle once and turn around with a quivering chin, “Isn’t anyone going to miss me?”

Back in Noah’s trailer, though, Noah waits in that limbo. He’s auditioned for Stranger Things but hasn’t heard back. He’s landed the part in Bridge of Spies but now he’s working with Spielberg and Tom Hanks. He’s only seen Tom Hanks in Big — a movie about being a kid trying to navigate in a grownup world. It came out 16 years before he was even born. Which just so happens to be at midnight.

The real theme of that movie is about the anticipation of things to come. Noah calls it “hurry up and wait.” That directive that comes from getting up early and getting in costume and getting on set to just sit there for hours. Even on your birthday.

There’s a knock on the door, “Hey Noah, we have to pull you off set and bring you to school.” Ah yes, in order to get those long scenes with Tom Hanks, he will have to spend even more than a single school day with a tutor.

But when he walks out of the trailer the entire 200 person cast and crew surround him. Lighting grips, truck drivers, camera operators, extras, actors, hair and makeup staff. They are all lit from the light of the candles on a birthday cake they’ve made special for him. “Happy Birthday Noah!”

Tom Hanks and Steven Spielberg stand behind him while Noah’s parents snap photos.

Tom Hanks smiles, “Hope you have an awesome tenth birthday!”

Noah won’t say what he wished for as he blew out his candles. But the excitement of anticipation fills every room when you’re young. When the candles go out and you don’t know what will happen next. Will the movie win an Oscar? Will you get that TV show? Will you get another season?

The joy of watching Will in Stranger Things depends on how much you’re willing to hide under the covers and get ready to be a kid again when the lights go out and everything gets scary again.