Hard Lesson For The Minority

Democracy is a system of government in which the power to rule is vested in the people. In other way round, power is with the majority.

In democracy, politics is a game of numbers. Decisions are made based on number or popularity. Unpopular policies don't see the light of the day. So also, the electoral candidates who do not have the support of the majority, can not cling to power. 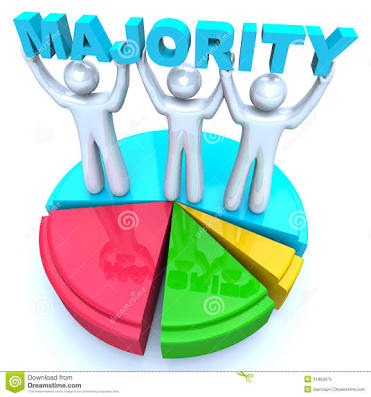 At polling, political parties with highest number of supporters turn out winners. It is democratic that majority rules over the minority.

On the other hand, minority rule is undemocratic. For example, oligarchy is government of the few for the benefit of the few. And this is a perverted democracy.

It is indeed a truism which the minorities will not want to accept, that as long as the majority desire to hold unto power, they will. In democracy, majority always have their ways in decision making.

Minorities don't win elections or have their ways in decision making, but will always have their say. They have right to express their feelings or opinions in poll, or in policy making.

The minorities also have right to enjoy every benefit the majority enjoy. They should not be discriminated upon because their opinion is different. All the privileges and social services rendered by the government is not for the majority or those elected the government to power, but for every citizens including those who did not vote for the government in power.

Minorities are also entitled to human rights. The same government they did not vote for has the constitutional obligation to protect their rights. FEARS OF THE MINORITIES

Minorities know that decision making and law making is based on numbers. That with simple majority or at most, absolute majority decisions are taken and laws are made.

With the above, the minority knows that the majority can take away their rights through legislation or other legal means.

Minority fears the domination of the majority. Their culture, language and other ways of life can gradually erode and replaced with the practices of the majorities.