RE: The Russian Poison Story is WMD 2.0

The british people aren't gullible enough to fall for this story, well some are, but most aren't. On a Jeremy Vine BBC radio 2 phone in most callers were very concerned about the lack of evidence and the hasty response by the UK government. It's a just more evidence that our global governments are run by crazy people.

While I can hope that the British people can hold it together, I recall watching my country go to shit after the 9/11 false flag, and the wars that are still growing out of it.

If Theresa May starts a shooting war, I reckon people everywhere in Great Britain will do what Americans did.

Nothing that put them in harms way.

Some folks made some noise, but not enough to stop it.

My hope is that this isn't enough provocation to put Brits in that position. Let's hope that the banksters can't muster one bad enough up.

In a comfortable western society it's hardly likely that people will stand up and be counted. They will always opt for the easy way out. It's only when their very lifestyle and existence is threatened that they will become active, and even then when it's too late. The rounding up of the Jews in Germany is a prime example of how the middle class act during catastrophic events. They first lived in hope that saner minds would prevail, then they lived in denial that atrocities could occur and finally they surrendered not realising the danger they faced. It's sad to say but I think the politicians have us cornered until a critical mass of people are awakened.

As a UK citizen it has been hard to challenge all the anti-Russian hysteria that has been built up over the years following the Feb 2014 coup. There is plenty of skepticism following the whole WMD debacle and the fact that the opposition leader has called for calm is very encouraging and I have emailed my MP to such an effect. I think the British people are sick of war, but they are deeply mistrustful of the Russians. We are also led by moronic politicians like Boris Johnson, who is the epitome of Etonic stupidity. On this mornings telly he claims "we actually have evidence", do you really Boris, actual evidence? Of course what we are aware of is that this takes place at a time when the economy is about to nose dive, and a serious financial crisis is threatening complete upheaval. "When all else fails they take you to war".
![650.jpg]
( 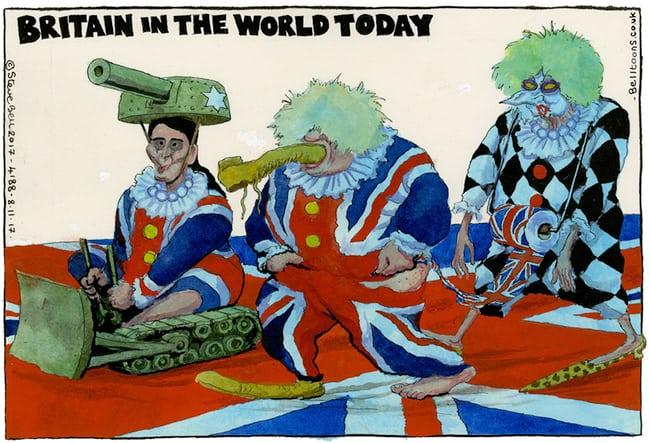 Agreed, on all but Johnson being moronic. I believe he is highly intelligent, but utterly disingenuous and probably sociopathic.