'Moon Jae-in watch,' a rare item craved by many 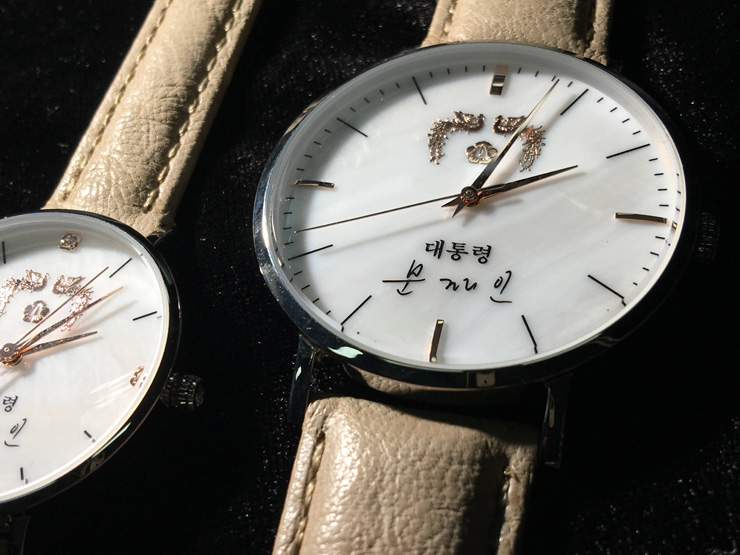 A souvenir watch given to guests invited to Cheong Wa Dae has President Moon Jae-in's signature on the dial. / Yonhap

The popularity is rising for a watch with President Moon Jae-in's signature that is given as a souvenir to visitors of Cheong Wa Dae, along with the President's high popularity, which is above 70 percent.

While many people want to have one, Cheong Wa Dae is managing the supply tightly, increasing its rarity.

The so-called "Moon Jae-in watch" has the design of a set of Oriental phoenixes on the upper side of the dial, which is the symbol of the Korean president. On the bottom side is Moon's signature, "President Moon Jae-in."

On the back of the dial is the phrase, "Putting people first," which is Moon's political philosophy. The sheepskin-made strap is beige in color, unlike those of former presidents' watches that were black. It comes in two sizes, a larger one for men and a smaller one for women.

The watch, which was introduced earlier this month, is made by a small company, and costs around 40,000 won. But it is not purchasable and is provided as a souvenir only to those invited to events at Cheong Wa Dae.

Up through former President Lee Myung-bak's days, the presidential office used to stock many watches and provide them generously, and usually then ruling party lawmakers hoarded them and offered them to bigwigs of their constituencies. The supply of the presidential souvenir became rather tight under the succeeding Park Geun-hye administration, but still such lawmakers could manage to get the watches through high-ranking Cheong Wa Dae officials by taking advantage of their personal ties with them.

However, the Moon government set up an internal rule to manage the supply more tightly. According to the rule, the watches are given to those invited to ceremonies or events at Cheong Wa Dae; foreign dignitaries visiting Cheong Wa Dae; or to those invited to events in foreign countries hosted by the President, such as a meeting with overseas Koreans during the President's visit to the country where they live now.

Cheong Wa Dae does not keep a stock of the watches but places orders for the needed volume ahead of such events in order to prevent a waste of taxes and possible misuse of the presidential souvenir.

Presidential secretary for administrative affairs Lee Joung-do, who makes the decision about which occasions Cheong Wa Dae will provide the watches, rejects any personal requests for the watches, however high-ranking officials may make the requests, according to officials at the presidential office.

"I can't get a single watch while dozens of my acquaintances ask me to get one for them," a Cheong Wa Dae official said.

Along with the watch, Cheong Wa Dae also introduced a teacup as a souvenir, which is usually provided at events hosted by first lady Kim Jung-sook.

Besides the souvenirs provided by Cheong Wa Dae, many other items related to Moon have been popular.

Stamps commemorating the inauguration of the nation's 19th President sold out when they were released on Aug. 17, with people queuing up in front of post offices nationwide. After the initially released 20,000 stamp albums were sold out, Korea Post produced an additional 12,000 albums, which also sold out. The agency is now receiving orders for a third production run.

The brands of his glasses, shoes, tie and outdoor jacket, the coffee bean blending ratio he enjoys, and books he read during his summer holiday have also created new demand in the market.