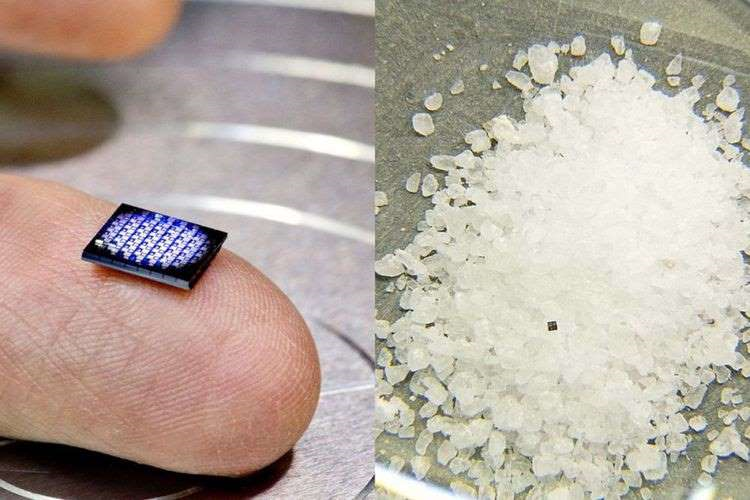 Yes, if we thought that there could be no small (very small) computer, then now it is not impossible. Because, recently IBM introduced a computer that claimed the smallest in the world. The size is only 1x1 mm, smaller than the grain of rice or even salt though.

Although small, the device is complete consists of processor, memory, and communication units embedded in a special motherboard. Computing power is comparable to x86 desktop computers from the 1990s.

It's power is not as big as mobile chips today, let alone a modern desktop computer. However, it is intended for different purposes, namely tracking authenticity and delivery on the basis of distributed ledger technology (the recording of decentralized transactions used as the basis of cryptocurrency technology alias virtual currency).

In the case of this delivery, IBM's tiny computer could function as a kind of "digital watermark" embedded in the goods to prevent counterfeiting and misuse in the logistics path.

Illustrations of tiny computer components made by IBM. The size is small so it can be embedded in various objects, including packing boxes. The price is called going cheap, about 10 cents dollars per unit.

Outside logistics, there are many other possible uses for the unnamed mini-computer. In fact, with a few hundred thousand transistors in it, the computer would be able to run a simple artificial intelligence program.

The tiny computer is still in the development stage. IBM has not revealed when it will be ready for use in the industry, except for predictions "within the next five years".

But with the presence of this mini computer can confirm that blockchain-based technology will be very important in various aspects of human life in the future. It can also be an indication that in the future humans will no longer use the physical currency (conventional) to conduct trade transactions, but already using a virtual currency that is accredited with the government and the state financial system.

Thanks
Don't forget to follow me @syahardian
Article : msn.com