The SSC exam is the rigid ruble of the foot

Saturia Rubel Mia is taking SSC exam by writing with the power of invincible will. Physical obstruction could not stop the invincible ruble. He is moving forward in the target. Rubel Mia did not have two hands since birth. The poor children's children are studying in studies studying in their own home and looking after their children. 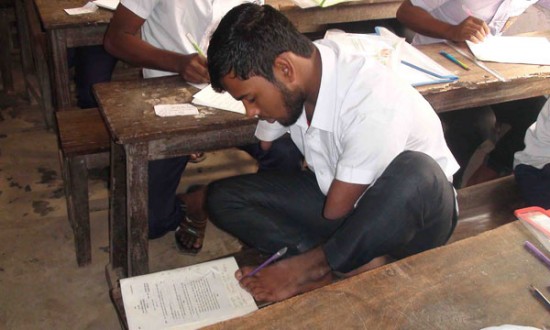 In the SSC examination held in the year 2018 from Rubel Miah Tilli High School, the son of Habee Mia of Tili Ghosh Pariya of Saturia upazila of Manikganj district has participated in this year. In the Saturia Pilot High School SSC examination center, Rubel Mia has folded her back with her feet, writing margins and writing them with a left foot.
(adsbygoogle = window.adsbygoogle || []). push ({});
Rubel can do almost all of his work, not just education, but without hands. After the examination, his rented house was seen, he himself was able to take a bath and then take a bath. The work of wearing a towel with a towel is the same thing. Eating rice with legs. Its easy to get her own furniture, books and books herself.
Rubel's mother Sakhina Begum said, Rubel II of her 3 children. The big girl gave the marriage. Rubel has two hands since birth. After growing up, he went to school alone. I'm studying a lot of trouble. I am reading books by myself and I am doing a job by doing royalty vans on my own.
Abul Hasan Bhuiyan, headmaster of the school at Tili High School said Rubel was born in 2002 at the house of van driver Habibi Mia and Sakhina Begum. After the ruble grew, Tili was admitted to the primary school, from that time her education started her life. After completing the PSC examination in Tilili, Tilili passed GPA 4.33 and got admitted to my school and passed GPA 2.90 in the 2015 JSC examination. In 2012, ruble is giving SSC exams. Whose roll is 343096, Reg No: 1510502764
Rubel's father Habibi Mia said, I have a rickshaw driver in the profession, my daughter Rubel with my daughter and my family. One of my daughters got married, my son Sumon and another girl were studying in primary school. Rubel is taking SSC exam by writing his foot with strength. I could not afford to buy a book because of a lack of family. Rubel has been able to reach today with tremendous will. Earlier, while writing in the newspapers during the JSC exams, many are helping. But now I'm worried about his future. After the SSC pass, read the following.
Rubel says, I do not think I have a hand. I do not think of myself as disabled, people think. My friends and teachers have always encouraged me. In particular, the then Deputy Commissioner of Manikganj Rasheda Ferdous gave me encouragement to visit my house. After finishing my education, I want to serve people and government servants and serve the country and the parents.
Rubel's SSC examination center secretary and headmaster of Saturia Pail High School Jasim Uddin said, "I am surprised to see Rubel is testing Meera's foot. It is possible to succeed after thousands of obstacles if it is very strong. Rubel is sitting quietly and quietly with everyone.
Upazila Secondary Education Officer. Mohiuddin said, Rubel is also physically disabled, but he is experimenting normally with other candidates. He is getting an additional 20 minutes allotted for the rebels.
Saturia Upazila Nirbahi Officer Nahid Farajana Siddiqui said that earlier, Deputy Commissioner Rasheda Ferdous sent the money to her house after seeing the news of ruble foot. Regulatory disability is given to the inadequate ruble and the administration has given the assurance that all facilities will be provided for higher education.