The FISA memo has been released and it PROVES the deep state coup attempts of hardcore TRAITORS within the DNC, FBI, DOJ, and yes - even some within the GOP.

TRAIN WRECK AND A MEMO
http://www.abeldanger.org/train-wreck...

Thank YOU for tuning in, for UPvoting and for REsteeming.

Wow. My extreme gratitude to the whale who just showed so much steem love.

Thank You, for all the truth you tell. These bad people must be held accountable.

These traitors will burn themselves to avoid prison. Plus, there is going to be a lot of House Cleaning (Murders & Suicides); Mark my words. The Snitches will be begging for protection...
Newq 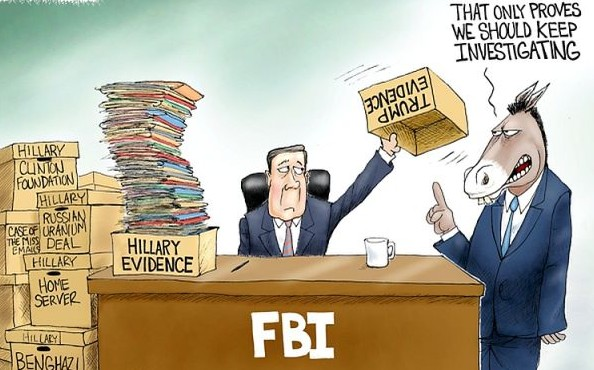 Hopefully we start to see some people start to be punnished out of this revelation...how much more proof needs to come to light? Resteemed!

Pretty hard to live up to the hype that was generated. The democrats also contributed to this by having Chuck and Nancy screeching about compromising national security.

If the memo is true, I think people should be bothered by a few of its key points:

At least 2 FISA warrants would not have been issued without the Piss dossier.

The dossier was compiled by a foreign spy, who hated trump. He was a Fusion GPS contractor and was also a paid FBI informant.

The FBI broke ties with him for violating their rules about leaking to media outlets, yet Bruce Ohr (FBI)continued to communicate with him. Bruce Ohr’s wife worked for Fusion GPS.

The foreign spy, Steele, leaked to Yahoo News and an article by their contributor was used in the FISA warrant. The contributor also worked for fusion GPS.

Did I get anything wrong?

Nothing wrong, "but wait... There's more!"... Department leadership lying under oath... And the very top knew. Either he was inept as a president, not, well maybe, but come on... Dirty dirty dirty...

The dossier was compiled by a foreign spy, who hated trump.

...because of what he found out about Trump and Putin.

Doing everything "they" can to resist the truth.
-Trying to stop memo release
-Attack on Congressional train
-Crashing stock market
-Attack Super Bowl with 'security' from G4S?...
-Kissinger pushing for pre-emptive strike on N.Korea
Doesn't matter though. Truth prevails!

Don’t forget pump and dump of crypto markets. The empire is losing control and can only tighten their grip now.

The memo wasn't anywhere near as shocking as the alt-media hyped it up to be. If the normies are to be redpilled, Trump needs to disclose the SSP and release the so-called "prosperity funds".

The memo that was supposed to shock the country did not. They are supposed to release more. Why the slow release? Let's get it over with.

Thank you for truth.Bad people should be investigated and must be held accountable.

Hi @sgtreport, I love the video. Greetings. I'll keep an eye out for the next video you upload with these features. Greetings.

This is nothing but another attempt by Trump to obstruct justice.

If the investigation wasn't finding anything, why would they bother?

If the investigation is finding things, then does it matter why it was started?

Oh, and don't forget that Rod Rosenstein, who Trump appointed to Deputy Attorney General, is the guy who appointed Mueller to the investigation saying:

"My decision is not a finding that crimes have been committed or that any prosecution is warranted. I have made no such determination. What I have determined is that based upon the unique circumstances the public interest requires me to place this investigation under the authority of a person who exercises a degree of independence from the normal chain of command."

If Trump is innocent, the investigation will find that.

Aye have been waiting for that American revolution of yours since september 12th 2001... still waiting... let me know when it happens...
bollocks. That's absolutely priceless coming from a Royal subject of Queen Elizabeth, the ONLY Sovereign as she sees it.

Assumptions, assumptions and more assumptions. Tell me what do you know???
You don't know squat about me yet you figure that I'm under HER rule.
I get it "you are guessing according to my use of English". WRONG. Way OFF the mark.
I see by your conduct that you have not done any of inner work and you are just ignorantly judging those who respond to you, Ad hominem.

nice one dear. i think the coup plotters are deeper than we can ever imagine. thanks for sharing

It's a good start, now let's see what comes of it.

I made a comment elsewhere that the time for "lock them up" is over, they need to be arrested, given a speedy trial, convicted of treason and hung, string them up. String them up.

Congratulations, your post received one of the top 10 most powerful upvotes in the last 12 hours. You received an upvote from @thejohalfiles valued at 221.00 SBD, based on the pending payout at the time the data was extracted.

Congratulations @sgtreport, this post is the third most rewarded post (based on pending payouts) in the last 12 hours written by a Superuser account holder (accounts that hold between 1 and 10 Mega Vests). The total number of posts by Superuser account holders during this period was 1310 and the total pending payments to posts in this category was $13286.38. To see the full list of highest paid posts across all accounts categories, click here.

The level of corruption is unbelievable within our government and law enforcement.We always knew the Clintons are powerful,but I don't think anyone ever thought that they basically hold the whole country hostage.Heads will roll and people will be jailed,but Trump won't fire Mueller.Why?Because Mueller knows his investigation doesn't lead anywhere and no court on Planet Earth would accept a case based on fabricated dossier paid by the Clintons.And Trump knows this too,so he will squeeze Mueller's balls until the point he will publicly say there is no Russia collusion and that will be Trump's perfect revenge on the Democrats and the lying media.He will demolish the Democratic Party into oblivion.
PS: I'm not a Trump supporter or Republican.

HANG THEM FROM THE LAMPPOSTS!

Nothing will happen, as usual. D.C. runs on mutual blackmail, that is the ultimate truth revealed by the Memo and recent events.

Sean, you are a patriot. Thank you.

Generally what you say is true. However Implying horrific crimes without proof and covering yourself with a random "allegedly" does not constitute responsible speech. Like you I believe Hilary is capable of just about anything, but you have to stick with evidence.....saying that there might be something on a laptop somewhere is not enough, is not fair, is not justice.