McGovern is one of the great civil disobedience heroes of our age, and has dedicated the last 30 years of his life to protesting outrage - starting with the Iraq war, and not stopping since. He is a great expert on Russia, speaks fluent Russian, and visits Russia often, and has been very outspoken against the insane US policy of aggression and confrontation with Russia. You can see his articles published on RI here: https://russia-insider.com/en/ray_mcgovern.

Here is a very good recent interview with him with RT's Lee Camp, to get a sense of what he is like. He is a great guy. https://www.youtube.com/watch?v=omKcHgSL0SQ

78-year-old former CIA analyst of 27 years turned anti-war protester, Ray McGovern, was dragged out of Gina Haspel's confirmation hearing on Wednesday, before being thrown to the ground and tackled by Capitol Police.

The hubbub started when Sen. Jack Reed, a Democrat from Rhode Island, asked Haspel about the morality of “enhanced interrogation techniques” (read: torture) and how she would react if one of her own officers were tortured. Would she consider a CIA officer being waterboarded by “terrorists” to be immoral? Reed wanted to know.

“Sorry to interrupt here,” McGovern said, standing up in the audience. “Senator Wyden, you deserve a direct answer.” Wyden, however, wasn’t questioning Haspel at the time, so it’s unclear what McGovern was referring to. -Vice Capitol Police can be heard commanding McGovern to "stop resisting" as they pile on top of him, dislodging his glasses and injuring his shoulder.

McGovern, a grandfather of nine who used to brief President Reagan every morning, demanded that Haspel answer questions about the CIA's waterbaording of prisoners at a CIA "black site" in Thailand. 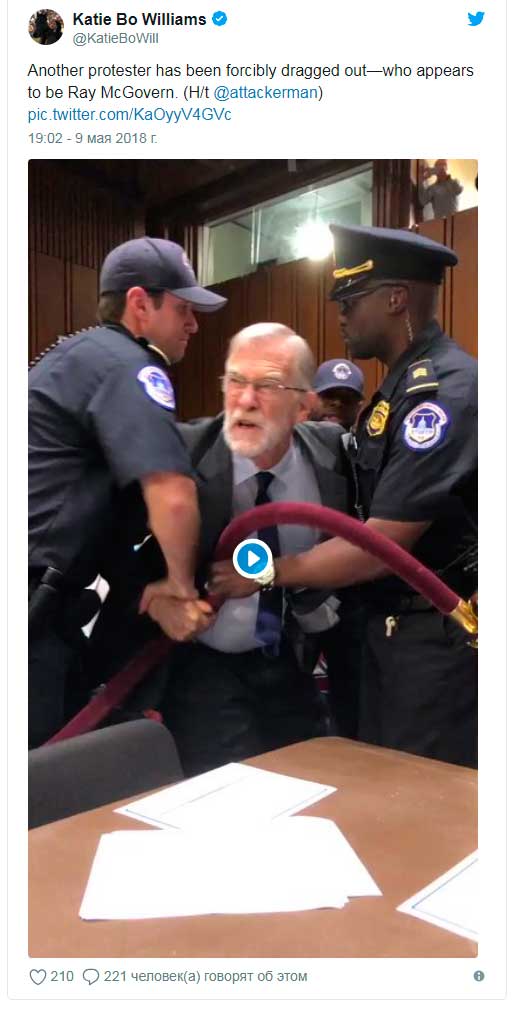 Prior to McGovern's forcible removal, a female protester was escorted out by Capitol Police after shouting "Bloody Gina!" and "you are a torturer!" - the former being a nickname given to Haspel by her colleagues at the CIA according to whistleblower John Kiriakou.,

Haspel came under fire in March after reports in the New York Times and ProPublica reported Haspell's involvement in the black site, as well as the decision to destroy 92 videotapes of the enhanced interrogation of Abu Zubaydah, a suspected al-Qaeda leader.

As acting head of the CIA following Mike Pompeo's departure to become Secretary of State, Haspel has promised not to create another torture program - though she wouldn't condemn the torture which took place at the black site under her watch. On Monday the CIA delivered a set of classified documents to the Senate, describing Haspell's 33-year career at the agency, "including her time in C.I.A's Counterterrorism Center in the years after 9/11." The files are available for every senator to read.

McGovern wrote an op-ed in Consortiumnews titled "Will a Torturer Become CIA Director?" in which he calls Haspel out for her role in the destruction of the Abu Zubaydah tapes.

It is no secret that Haspel oversaw detainee torture, including waterboarding, at a CIA “black site” base in Thailand. The nonprofit National Security Archive, housed at The George Washington University, reports that Haspel later drafted a cable ordering the destruction of dozens of videotapes of torture sessions, including some from before her arrival. Haspel also helped feed repeated lies about the supposed effectiveness of torture to CIA superiors, Congress, and two presidents. -Ray McGovern

Haspel was grilled by legislators over a wide range of topics, including of course her tenure running the "black site" in Thailand. As _Vice reports, "_After McGovern was forced out of the room, Haspel continued to answer Reed’s question."

“I don’t believe the terrorists follow any guidelines, or civilized norms, or the law,” she said, further insisting there was no comparison to be made between CIA agents and terrorists, even if both employed torture.

Ray McGovern is one of the kindest, most genuine people I've ever seen. Today he stood up against a torturer and was beaten for it.