Welcome to The PFWnews Morning Run! Here we will be taking a quick run at the news to start your day! Let's get into it... 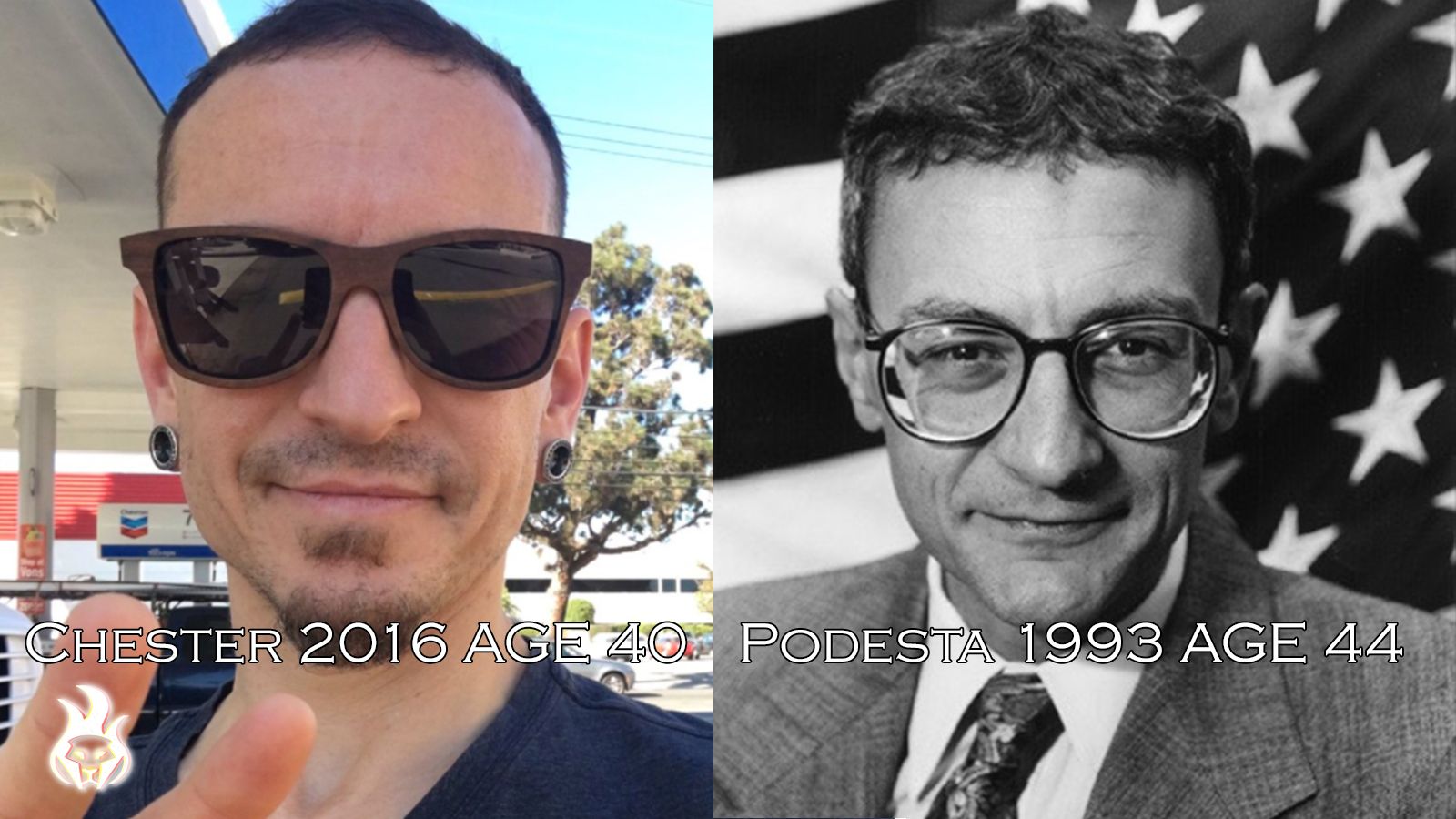 This is a conspiracy theory swirling around the web right now that I thought was worth mentioning because former Linkon Park singer Chester Bennington and Hillary Clinton's former campaign chairman John Podesta look almost identical.

So, according to the rumors, Bennington was sexually assaulted at a young age by a "family friend."

Bennington himself said that a friend who was a few years older than him was his abuser.

It is also being said that Bennington's mother had an affair with John Podesta.

Now, we all remember John Podesta, the guy who probably came under the microscope more than anyone else with the Pizzagate discussion that was sparked from leaked emails by Wikileaks.

Here is what one Facebook user had to say:

It is rumored that Chester Bennington from Linkin Park was John Podesta's bastard child. Chester Bennington struggled his whole life with mental health issues as a result of being molested as a child. Chester Pennington's parents divorced when Chester was 9 years old after his father found out his mother was messing around.
Chester Bennington's mother Elaine had an affair with John Podesta. Chester Bennington received a grant from the Clinton Foundation as a result of John Podesta's influence. John Podesta personally knew he was Chester's biological father, something that was not revealed to Chester until much later in years possibly just recently.
It could be that after Chester Bennington found out who his real father was he was stricken with sorrow and anger. He possibly then looked into John Podesta to find out that Podesta was involved with child sex pedophile Rings linked with Hillary Clinton Foundation and was responsible of human trafficking and prostitution of minors in Haiti and other places of the world.
Chester Bennington admitted a while back that he had been molested by a friend of the family when he was a child. Perhaps when Chester found out that his molester was indeed his real father, John Podesta had to silence his newly acknowledged bastard child.

I'm just going to leave you guys some links to the conspiracy theories that are swirling around Bennington at the moment. Let us know what you think in the comment section below. "Donald Trump gave us several directives. One is to dismantle transnational criminal organizations. That is what we are announcing today. Dismantling of the largest dark website in the world by far,” drug warrior Sessions said.

Sessisons mentioned that the take down of the AlphaBay darknet market (think Silk Road) is part of the greater battle against opioid addiction in the United States.

The Attorney General then went on to say that he knew of several Americans killed by drugs sold on AlphaBay, and gave examples: “One victim was just 18 years old when, in February, she overdosed on a powerful synthetic opioid which she had bought on AlphaBay. The drug was shipped right to her house, through the mail."

“This is likely one of the most important criminal investigations of this entire year,” he added. “This case, pursued by dedicated agents and prosecutors, says you are not safe. You cannot hide. We will find you, dismantle your organization and network. And we will prosecute you."

In his closing statements, Sessions said that he believes the American people are now safer from identity fraud, malware, and drugs thanks to the takedown of AlphaBay and Hansa, two of the largest darknet marketplaces.

“Make no mistake, the forces of law and justice face a new challenge from the criminals and transnational criminal organizations who think they can commit their crimes with impunity using the dark net. The dark net is not a place to hide. The Department will continue to find, arrest, prosecute, convict, and incarcerate criminals, drug traffickers, and their enablers wherever they are. We will use every tool we have to stop criminals from exploiting vulnerable people and sending so many Americans to an early grave. I believe that because of this operation, the American people are safer – safer from the threat of identity fraud and malware, and safer from deadly drugs,” Sessions said.

Now, there are many people out there who see these darknet markets as places where people are excersising their freedom to voluntarily engage in commerce. Some even argue that these types of markets eleminate the need for violence when it comes to the blackmarket sale of drugs.

The Grugq wrote on Medium, “Great job ridding the world of a non-violent drug distribution channel that virtually eliminated risk and significantly reduced harm to addicts.”

The Silk Road market place is perhaps the most famously known darknet market, as it was shut down in 2014 and its founder, Ross Ulbritch, was sentence to a hefty prison sentence.

Ulbritch was a big propnent of freedom and austrian economics. He saw the Silk Road market place as an area of the internet where people could truly be free and trade as they pleased.

Here is an interview with Ulbritch's mother. It is always interesring to get the other side of the story.

It is also interesting to note, Alphabay’s alleged founder Alexandre Cazes is reported to have committed suicide after being arrested in Thailand on July 5. The DNC is in financial turmoil while the GOP is thriving

According to recent filings with the Federal Election Commission, the DNC is currently $3.3 million in the red.

Menwhile, the Republicans are having no problem raising large amounts of money, as Chris Enlow of the Blaze reports:

Meanwhile, the Republican National Committee outpaced the DNC by more than $8 million in June, raising more than $13.5 million.
The DNC ended the month with just $7.4 million with cash on hand, while the RNC has nearly $45 million in cash on hand, according to the filings.
The Republican Party has raised more than $75 million in 2017 alone.
It’s not clear what exactly has led to a poor financial status for the Democratic Party, but so far into 2017, the party is widely seen as being haphazard and without any real leaders or a central message.

I have to disagree with Mr. Enloe, just because the DNC isn't reporting why exactly their finances are in shambles, doesn't mean it isn't obvious why it is happening.

The DNC has resorted to identity polictics and democratic voters are starting to believe that their entire platform has turned into making a witch hunt out of Trump's alleged connections with Russia.

Tom Luongo said it best in his latest @goldgoatsnguns report:

Look, I’m no fan of either party. I’m just calling this as I see it. But, the truth is that the centrist libertarian part of the electorate is awake and energized. They are full of positive energy and have all the momentum. And they are infecting the GOP much to the consternation of the RNC.
Whereas the cultural Marxists at the DNC have a bunch of Millennial jackasses running around on George Soros’ money, their anger fueled by a misguided sense of what’s wrong with the society, and a failing media to keep them afloat.
But, none of that translates into votes at the ballot box. In fact, it is a recipe for collapse on election day. Normal Americans are more horrified by Antifa and Black Lives Matter than they are by Trump’s Twitter storms.
While one behavior may be seen as somewhat un-presidential, the other’s is distinctly Un-American.
This is the strategy the Democrats have adopted because they have nothing else. They’ve lost the arguments of ideas. Marxism is a failed ideology that has produced the polar opposite of what it promised.
Capitalism isn’t perfect but they also know wealth redistribution doesn’t work either. Power of the elite is the problem. Once Trump is able to push forward without the petty opposition he’ll make his case to them.
This is why impeachment is the Democrats only path to victory over Trump. The threat is real, make no mistake. And it’s why it has to happen soon before Trump’s vote fraud commission comes back with the final nail in the DNC’s coffin, which it will.
In the end, the psychological bill for all of their fecklessness will be paid at the ballot box. The rejection of sovereign debt and spending our grandchildren into Soros’ Debtor’s Prisons is just around the corner.

Thank you for reading The PFWnews Morning Run! Please leave your thoughts in the comment section below, we would love to hear from you. Also, feel free to give us a FOLLOW and check out other interesting news reports at PlanetFreeWill.com. Have an amazing day!
This article was put together by the team of writers at PFWnews.com

Congratulations @planetfreewill! You have completed some achievement on Steemit and have been rewarded with new badge(s) :

Isn't it a shame that so many read your post yet didn't upvotte? I hope it's because many non-Steemians read it from a link elsewhere .