2017 was the second hottest year on record, according to NASA

A year ago was the second most sweltering on record, as indicated by researchers.

Worldwide normal temperatures in 2017 were 0.9C hotter than the 1951 to 1980 mean, concurring NASA's Goddard Institute for Space Studies (GISS) in New York.

In a different, autonomous investigation, researchers at the National Oceanic and Atmospheric Administration (NOAA) reasoned that 2017 was the third-hottest year since their records started.

The minor contrast in rankings is because of the distinctive techniques utilized by the two offices to break down worldwide temperatures, albeit over the long haul the organizations' records stay in solid assention, said NASA.

The two investigations demonstrate that the five hottest years on record have all occurred since 2010.

The planet's temperature has ascended by somewhat more than 1C amid the previous century, a change driven to a great extent by expanded carbon dioxide and other man-made emanations into the air.

A year ago was the third sequential year in which worldwide temperatures were more than 1C above late nineteenth-century levels. 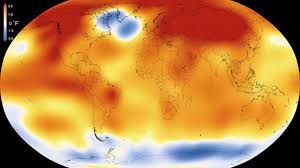