Companies Should Be Allowed to Discriminate, Governments Should Not 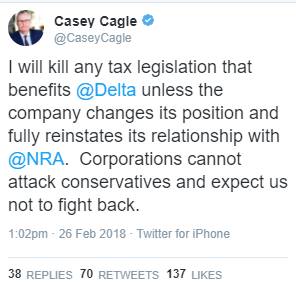 Georgia's Lt Governor just announced that he fully intends to use the power of his office to illegally punish a private company:

"I will kill any tax legislation that benefits Delta unless the company changes its position and fully reinstates its relationship with NRA. Corporations cannot attack conservatives and expect us not to fight back."

Essentially a public announcement that he intends to abuse his government position to punish a private company for exercising its rights to do business, or not, with whomever it pleases.

Corporations that take political stances (in the hopes of attaining political goodwill) should be prepared to face some amount of political consequences.

I like my companies and sports to have no politics in them. If they choose to implement political agendas, I'll subject them to the little influence I have.

Let them. The Market will Judge, not some Politician...

I 🤦🏻‍♀️ so hard when I heard this...the corruption in Broward County is beginning to come to light but noooooo the media studiously focuses instead on companies ditching the NRA, and this utter nonsense makes it worse!

That was pretty stupid, but I see governments using corporations to subvert the rights of the citizenry happening more and more through monopolies. For instance. When self driving cars arrive, and people no longer own their own vehicles, but instead must depend on companies like Uber. What is to stop a company from deciding that they won't pick you up because they dislike your politics? The answer is nothing because private companies don't need to follow the constitution. That is except for when it comes to baking the cake! Well, I guess that is just the free market there Guy!

A commie in sheep's clothing