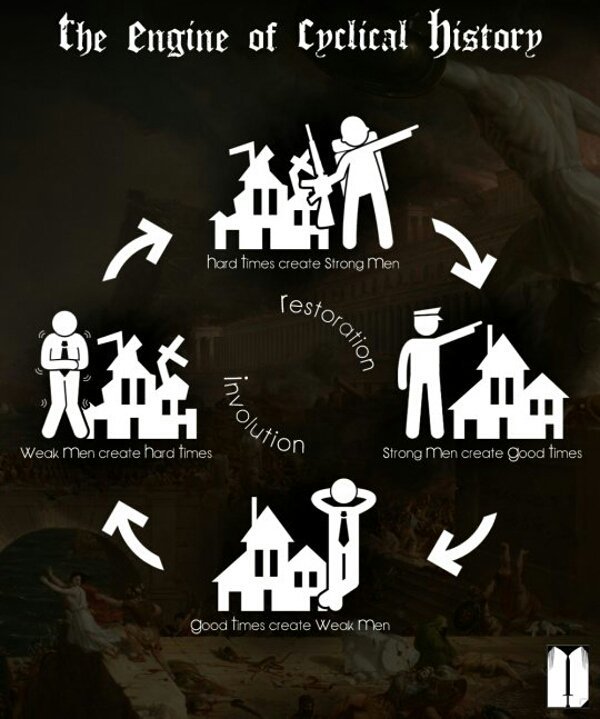 "Those who do not learn history are doomed to repeat it". We've heard this phrase time and time again, and it is more relevant than ever today. The tactics of instilling fear in the people, the problem-reaction-solution events, and the media acting as lapdogs to the governments by spewing propaganda that justifies ever-expanding bureaucracies have all been tried in the past by previous world leaders and governments. Malcolm X explained how they use the media to trick the people into loving the oppressor and hating the oppressed. They create the caricature of a boogeyman in order to justify taking away our individual rights and increasing mission creep overseas. They tell you why it's better to be a slave living in "peace" rather than a free individual living in a risky and dangerous world. The question then becomes: How do the people fall for this and allow this every time?

"Good times create weak men. Weak men create bad times. Bad times create strong men. Strong men create good times." This cycle of history is prevalent whenever we look back at society's past. Historians Neil Howe and William Strauss came up with a new theory of American History in a book that the President and his top adviser have referenced, called "The Fourth Turning". This theory is called the “80 year” theory of political and social upheaval, which means that about every 80 years, there is a significant upheaval of the social and political status quo in the country. And the concept of this theory is not limited to just American history. Throughout the world, we have seen shifts in the delicate balance of power between nations, companies, political parties, and other institutions. Father Time outlasts them all, and remains undefeated. Many have asked the question: why do the winds of change sweep away even the most noble, benevolent, and sturdiest of empires? There are many answers. For rule based on line of succession, complacency, spoiled/disinterested/unappreciative family members, or severance of that line of succession led to the end of that rule. Alexander the Great’s Macedonian Empire fell because it was built on the back of his own singular charismatic figure, and because he never accommodated the lands that he captured into a singular authority other than himself, the empire collapsed when he died. Other empires have collapsed because of insurmountable debt. The British Empire fell after they broke the bank fighting 2 world wars to defend its interests. Varying demographics and cultures also come into play when empires expand. The Roman Republic collapsed because diversity and varying socio-economic realities made the existence of a central authority unsustainable. The Ottoman Empire collapsed because of this reason as well as fact that their continued incursions into Europe eventually led to a situation where Europe fought back once it was united enough to do so. The Ottoman’s hostile actions eventually led to a reaction.

“Every action leads to an equal and opposite reaction”. The world saw Saddam Hussein give up his nuclear weapons. Then, the world saw the US’s “Shock and Awe” operation to take out Saddam in the Iraq War. The world then understood that the US government will not hesitate to use its military power for its own interests. This led to many countries developing a two-pronged approach of acquiring nuclear weapons as a deterrent to American aggression and building regional spheres of influence to rival America’s economic, military, and political influence in the world. This two-pronged approach is the “opposite reaction” to the aggression of the US government around the world. America is losing more friends through its aggressive actions than it can ever hope to gain through force, coercion, or installing “friendly” (puppet) governments. This will eventually lead to a point where America will no longer be able to use aggression to go after its interests, and will be forced to compromise and negotiate. All of this is on top of the fact that the US government keeps as much of its own aggressive actions secret from the American public as it possibly can. This will eventually lead to the end of American Empire unless the American government drastically changes its behavior. America’s own foreign policy is creating more and more individuals every day that are against America. America’s foreign aid is creating more and more people that are not sympathetic to the cause of American expansion, American influence, or becoming part of American culture. These people are much more privy to what “American Exceptionalism” really means than America’s own citizens do. It is therefore not a surprise that in a recent world poll, the country named as the number one threat to world peace is...the United States.

Now, why is the concept of falling empires important to the theory of 80 years? Because the concept that can most effectively be applied to all of the cases of falling empires is the “Good times create weak men” concept. All of these empires rose and existed the way they did because strong men created them. They fell because weak men destroyed their solvency. What happened in between? Strong men handed off the baton of good times to men who never had to face the adversity of creating those good times. This next group of men who took the baton handed it off to the third generation of leaders who not only did not face the adversity of creating the good times, but they never met or learned from the strong men who created the good times. Thus, these spoiled and unprepared leaders could not adequately defend prosperity, and thus succumbed to corruption, lust, and greed. These are the vices of men that rear their ugly heads during times of peace and prosperity.

Let us compare this unfortunate progression to today’s America. Just before the Great Depression, Americans enjoyed the roaring twenties. Then, when the Depression hit, Americans felt incredible hardship and bad times for the first time in a while. This hardship led to a desire to bring about the change needed to restore prosperity to society. Thus, the first years of the 80 year period began in the 1930’s. Now remember, in order to reach the end of the 80 year period, we first have to go from bad times to good times. This happened right after WWII ended, as American soldiers came back to help create the most populous generation in American history at the time. This was, of course, the Boomer generation, and they grew up during the 50’s and 60’s, a time of incredible and shared economic growth. These Boomers helped expand America’s economy into the behemoth it is today, as America has enjoyed unprecedented economic success ever since. However, as the older generations who remembered the tough times before WWII handed the economy over to the Boomers in the 70’s and 80’s, the keen interest in keeping America’s leaders accountable and in check was lost. The Boomers lived their lives in financial security and prosperity, and never understood what caused the hardships before their time. The result has been devastating for most people in America. As the Boomers grew older, they lived in ignorance as the political class of the country grew more and more corrupt, and as the leaders took advantage of this ignorance to any extent they could. This culminated in the 2008 financial crash, and the disproportionate gains that the ruling class have gotten during the so-called “economic recovery” after it. We are now approximately 80 years from the Great Depression, and the desire to bring about change has returned, right on queue. The younger generation of millennials and Generation Z are living in bad times, with little job opportunities, massive college debt, artificially inflated prices in the housing and medical industry, and a situation where the massive amount of retiring and retired Boomers are placing a strain on younger taxpayers and available taxpayer funds. Thus, the bad times are creating strong men once again.

Nice post! I also wrote something similar and I'm creating a new post on this topic soon.