China vows to hit back as Trump prepares trade sanctions 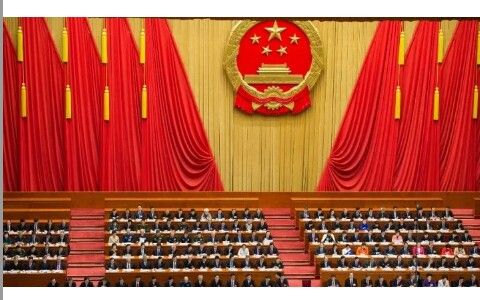 President Donald Trump is poised to unveil sanctions against China on Thursday for the "theft" of US intellectual property, fueling fears of a trade war as Beijing vowed to retaliate.

According to his schedule, released by the White House on Wednesday evening, he will sign "a Presidential Memorandum targeting China's economic aggression."

The Chinese commerce ministry issued a pre-emptive warning, saying in a statement on Thursday that Beijing "will certainly take all necessary measures to resolutely defend its legitimate rights and interests".

It is just weeks since Trump short-circuited White House deliberations and announced a raft of sanctions on foreign-produced steel and aluminum off the cuff.

On Wednesday, Federal Reserve Chairman Jerome Powell warned that the prospect of a trade war was a growing threat to the world's largest economy.

Chinese Premier Li Keqiang urged Trump on Tuesday to not act "emotionally," but the impulsive president is showing no sign of backing down.

US Trade Representative Robert Lighthizer recently put a separate proposed package of $30 billion in tariffs on Chinese imports on the president's desk.

And Trump appears to have agreed to at least that amount, as he tries to fulfil campaign promises to get tough on "cheating" by US trade partners, which he says have destroyed American jobs.

The US trade deficit with China ran to a record $375 billion last year -- but US exports to the country were also at a record.

Washington has long accused Beijing of forcing US companies to turn over proprietary commercial information and intellectual property as a condition of operating in China.

Trump claims to have built up a generally good relationship with his Chinese counterpart Xi Jinping whom he has praised for his role in pressuring North Korea over its nuclear program.

However, the trade dispute threatens to cast a pall over those relations, especially given the recent warnings from Beijing.

A senior official in Lighthizer's office said Wednesday that the Clinton, Bush and Obama administrations had attempted over the decades to coax China into respecting market economics and trade liberalization, but had all failed.

The Trump administration opened an investigation last August, acting on a series of allegations against China, including that as a condition of doing business, Beijing forces US companies to enter joint ventures and transfer technology and trade secrets to domestic partners, and that American firms are not able to license intellectual property in China as freely as Chinese companies.

US officials also allege China has hacked US networks and conducted industrial espionage to steal US intellectual property.

Xi sent his top economic advisor Liu He to Washington this month to discuss trade tensions, but the US official said that at no point had the Chinese made a constructive proposal.

"Certainly by November, the background was such that officials in China had reason to know about the concerns we've raised... At least, as of today the administration has not been satisfied with the types of responses we've been getting from China," the senior official in Lighthizer's office said, speaking on condition of anonymity in a briefing to reporters.

"Obviously the president will have the final say in terms of what we end up doing here."

"As a general matter, we do have very strong evidence that China uses foreign ownership restrictions such as joint venture requirements and foreign equity limitations to require or pressure technology transfer from US companies to Chinese entities," he added.

Along with the announcement of that offensive, Washington also held out the possibility of a detente with regards to the European Union, which reacted furiously to the news of steel and aluminum tariffs.

In a joint statement, US Secretary of Commerce Wilbur Ross and EU Trade Commissioner Cecilia Malmstrom said they had agreed to immediately begin "a process of discussion" on the tariffs and other matters "with a view to identifying mutually acceptable outcomes as rapidly as possible."

Malmstrom had called for Europe to be exempted as a whole. Speaking to reporters in Brussels on Wednesday, European Council President Donald Tusk said he harbored "cautious optimism" on the prospects for a resolution.

The White House already said Canada and Mexico, which are major producers of the metals, will temporarily be exempt from the tariffs during talks to renegotiate the North American Free Trade Agreement.