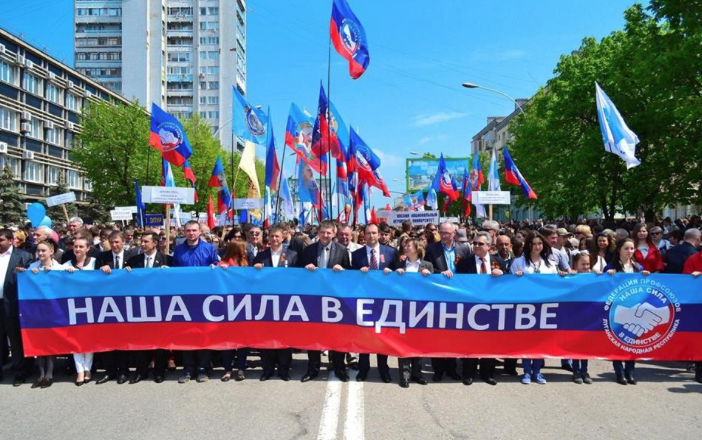 This “best of” compilation of huge crowd videos clearly shows that the people of the breakaway regions chose their own path of independence away from the Kiev regime that came violently to power in the February 2014 US and EU backed illegal coup.

You will not see these massive crowd events reported in western media which repeatedly lied about the war and the local support from the 4 million strong ethnic Russian Ukrainian population in Donbass who have been relentlessly bombed by the Kiev regimes fascist battalions (which still continues to this very day).

Crimean's celebrate Russia and sing the Russian National Anthem in 2015 -

The following link leads to a post where I personally placed 9 videos of the 2014 referendum lines proving that voter turnout was massive. The link now shows that You Tube has removed all 9 videos from 9 separate accounts. I was stalked, harassed and banned from Democratic Underground for revealing the above information about the war -

Patrick is the only American reporter actually reporting from the breakaway republics and has been consistently doing such for the past 4 years without fail, unlike the mainstream American media which sent relatively few reporters to Donbass, and currently doesn't have any reporters assigned there and providing accurate real time information from the region.

Makes me sad. Those are people to whom the United States should be a beacon, a leader, a light showing the rest of the world how to have an open, peaceful country. We should see the people in those videos as our brothers and sisters and rejoice that they have decided to take responsibility for their community into their own hands.

Instead we chose empire, chose colonialism, chose cynical manipulation and opacity and subterfuge and undermining, callously pitting groups against each other, tearing down their society so that we can precariously balance on top.

Thank god new media is emerging so we can leave the old rotting shell of manipulative deception and its warmongering parasitic harpies behind.

Thank you @gwiss. Your words sum it all up so well. The US could have definitely taken the high road and helped lead the world to a better future for all humanity. Unfortunately, those at the top chose the low road and have caused so much global suffering. Alas, it is also now leading to a global awakening of consciousness, and thus, maybe some greater good will come out of all this after all, and those that have caused the suffering may one day be held to account. That is what I truly hope for and post for.

Nice one Upvoted and Resteemed