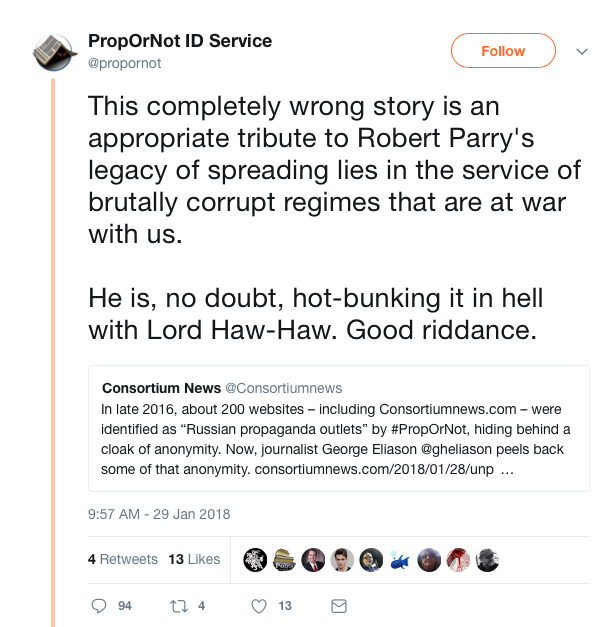 On December 28th, 2018, just days after the death of reporter Robert Parry, Consortium News published a highly revealing expose' on the dubious website PropOrNot and its shadowy previously undisclosed staff. That explosive story fully exposes the elusive group that worked with the Washington Post and CIA to label over 200 US alternative media sites as "Pro-Russian" sites in November 2016, and has now led to the personnel behind the PropOrNot Twitter page openly mocking the death of Robert Parry, one of the most professional reporters in the history of the United States.

In late 2016, about 200 websites – including Consortiumnews.com – were identified as “Russian propaganda outlets” by the dubious website PropOrNot, hiding behind a cloak of anonymity. Now, journalist George Eliason peels back some of that anonymity in this article originally posted at Washington’s Blog.

Editor’s note: In November 2016, Consortiumnews.com was listed with about 200 other websites at the shadowy “PropOrNot” website, which was claiming to serve as a watchdog against undue “Russian influence” in the United States. The PropOrNot blacklist was elevated by the Washington Post as a credible source, despite the fact that the neo-McCarthyites who compiled the list hid behind a cloak of anonymity. As an article at Consortiumnews explained at the time, the Post granted PropOrNot anonymity “to smear journalists who don’t march in lockstep with official pronouncements from the State Department or some other impeccable fount of never-to-be-questioned truth.”

Now, George Eliason, an American journalist living in Ukraine, has published an article at Washington’s Blog – one of the other 200 blacklisted websites – examining the cast of characters who may be behind the PropOrNot endeavor. As explained in a disclaimer at the original article at Washington’s Blog: “A leading cybersecurity expert has publicly said that Mr. Eliason’s research as presented in this article does not violate the law. Washington’s Blog does not express an opinion about whether or not the claims set forth in this article are accurate or not. Make up your own mind.”

In the Twitter screenshot below Consortium News posts about their article exposing PropOrNot..... Below we see the backlash and grave dancing of the PropOrNot personnel.

From this point out I will post screenshots of the Twitter posts so people can judge for themselves the manner of professional standards of the Washington Post affiliated group PropOrNot.

Link to PropOrNot Twitter thread the screenshots are derived from: 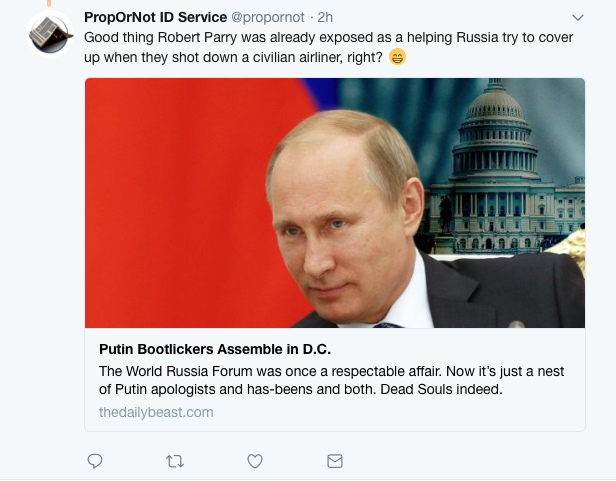 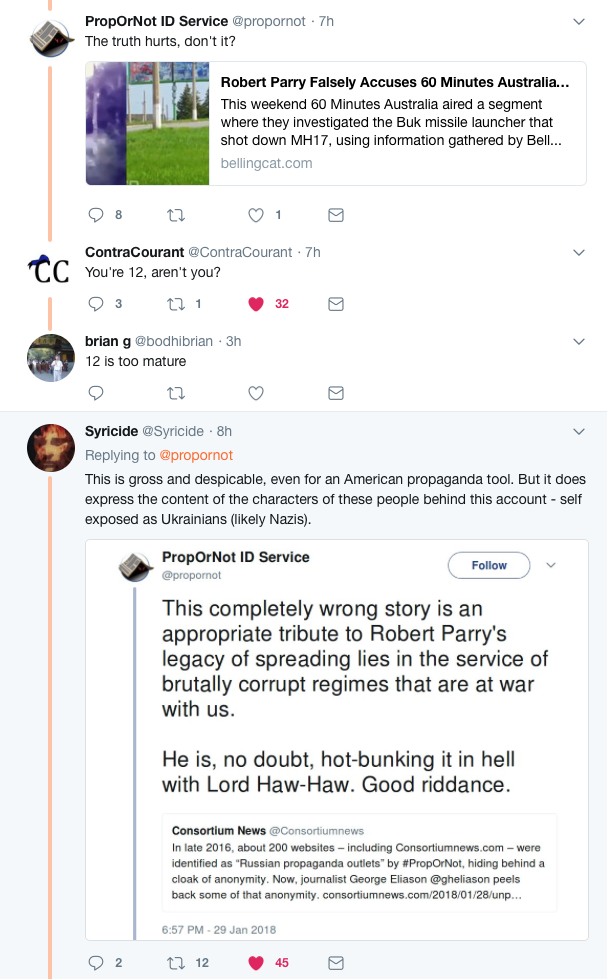 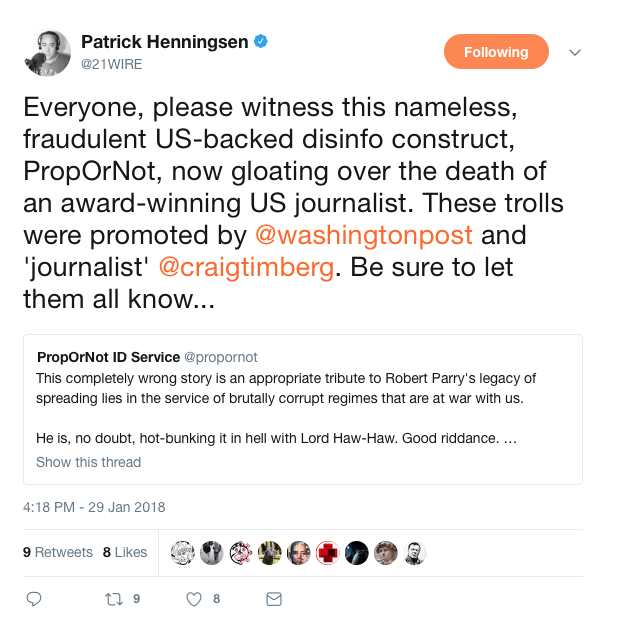 Norman Solomon of Fair and ExposeFacts.org pays tribute tonight to Robert Parry in The Nation

After Robert Parry died on January 27, I asked another great investigative journalist, Seymour Hersh, for some words. “I ran into Bob more than three decades ago when he was the first to warn of the Iran/Contra affair, to little avail,” Hersh replied. “He was widely seen over the next years as a critic of the mainstream media in America. That was not so. He was a critic of lousy reporting, be it in Pravda or The New York Times. He wanted every journalist, everywhere, to do the research and the interviewing that it takes to get beyond the accepted headline.”

At least now people can see PropOrNot for what they really are. They are disgraceful human beings, and by their own sick-minded actions, have proven that their 'reporting' on the American alternative media is not to be trusted, nor taken seriously. The Washington Post should disassociate themselves from this group and issue an immediate apology to Consortium News and the family of Robert Parry, and Michael Weiss of the Daily Beast should be held to account for his complicity in these unprofessional and disgusting actions.

Disobedient Media also has more that coincides with this story and the false framing of the American alternative media by the CIA and Washington Neocon think tanks:

Caveat: Any cryptocurrency generated from this post will be sent on to Nat Parry, George Eliason and Consortium News.

Thank you for the info and update on this. Times are so very busy this is something I hadn't really had an opportunity to pay much attention to. And it is attention that is needed now like never before. Thanks again!

You are very welcome @vickiebarker. Proud to share. I hope they get much further exposed as the cretins they are.

Thank you for your article my friend. Robert Parry was one heck of a well-respected journalist, an American icon. He will be missed. And Seymour Hersh figures right up there with Parry. Two of the best to have ever existed, imo.

I read through some of the Twitter exchanges earlier today. The PropOrNot account tweets were very childish, with extensive use of emojis. There was no substance to anything tweeted from that account. Reading through the tweets led me to pose the following question ... After just finishing a post about Robert Parry, finding out these scumbags are so public with their smear job just angers me to no end. But Trump helped the American people rediscover their blind patriotism. Russia bad, US good.

This completely wrong story is an appropriate tribute to Robert Parry's legacy of spreading lies in the service of… twitter.com/i/web/status/9…

Can't resteem because I don't yet trust 'disobedient media', their site looks like a popup fake news site to me, which consortium news was not.

ProporNot also went after truthdig and truthout, which are sources I've trusted for a long time with success. It is my belief that many of the popup fake news sites like yournewswire are immitating their success in form so they can slip in their disinfo(i.e. it's ok for trump to owe his entire career to the russian mafia and still be president etc, seems to be the most popular at this point.)

One of the r/conspiracy mods made some observations we should be looking out for here too:
https://www.reddit.com/r/conspiracy/comments/7tt1qc/psa_submission_statement_update_and_how_to_spot/

Hwy, have you joined @suzie3d discord server yet. Shes recently posted about it if you haven't already. You should come and join.