On a Friday (weekend and holy day for Muslims), the morning after the UNSC failed to impose a cessation of hostilities to protect the Nusra Terrorists in Eastern Ghouta, those terrorists bombed a number of neighborhoods in the Syrian capital Damascus with heavy mortars and missiles causing the deaths and injuries of tens of civilians and large damage to properties.

The gifts from US, UK and French to the Syrian people via their mercenary Nusra Front terrorists in Eastern Ghouta with their Oscar 2017 White Helmets faking videos there and implementing it in reality against civilians in Syrian government areas.

To watch the video click on the above thumbnail, the below featured image is for sharing on social media purpose: 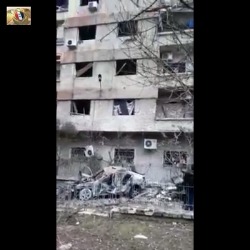