United States and its Allies Obliterated Raqqa, Didn't Liberate It

Seems the United States and its group of allies in the rogue illegal coalition against ISIS it created has mixed between 'liberating' and 'obliterating', they used the second for their operations in Raqqa city in Syria. Unlike the surgical air raids carried out by the Russian and Syrian air forces and the Iranian drones, of course to the contrary of what your mainstream media would tell you, the US-led coalition targeted the infrastructure, housing, hospitals, public and private facilities and everything worthy in the city of Raqqa killings hundreds of civilians in their way, sometimes in a single air strike (http://www.syrianews.cc/us-led-coalition-massacre-raqqa/) in order to kick ISIS terrorists outside the city.

These crimes against humanity and against the Syrian state will not be ignored and time will bring those culprits to justice or Karma will take its revenge as we can see before our own eyes in the West. While keeping in mind that Russia, Iran and Hezbollah were invited by the Syrian Arab Republic's legitimate government, we see these rogue states led by the USA, UK and France from the United Nations Security Council, ignore all principals of international law and breach the sovereignty of an establishing member state of the United Nations.

Nothing new for those who invaded Iraq and live on sucking the blood of their victims.

A couple of days ago the US and its proxy forces declared the city of Raqqa, the previous stronghold of ISIS liberated, we didn't see them fight ISIS in the city as much as we saw them arranging a free passage for ISIS terrorists out of the city towards battle fields with the Syrian Arab Army. Who ISIS are working for exactly?

Their arming and finance tells enough. It's uniforms and flags replacing, not a liberating rather obliterating. ISIS and US Massacres 180 Civilians in Iraq and Syria Fleeing Death: http://www.syrianews.cc/isis-and-us-massacres-180-civilians-in-iraq-and-syria-fleeing-death/ 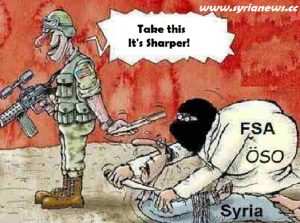