According to the BBC, Asifa Banu, a Muslim nomad from Kashmir's Kathua city, went missing on January 10.

After 7 days, his corpse was found in a nearby forest.

Police arrested a 19-year-old man suspected of involvement in rape and murder.

Based on the statement of the young man, the former government official Sanjeev Ram and police officer Deepak Khajuria arrested his uncle's temple (the temple that was raped and murdered by Asifa).

Special Police Officer Surinder Kumar, the fourth person in Grhupta, was arrested in connection with the incident. Witnesses were watching him on the spot.

The boy's friend, entered Kumar, raped the child. The police are looking for him.

Police investigations and collectors from the site are found to be involved in the rape and murder of the accused in the chemical examination of the samples, said NDTV.

The discussion started again in India this week over three months ago.

Because, because the arrestees were Hindus, some Hindus of Hindus in Jammu started their protest demanding their release.

According to the BBC, a group of Hindu lawyers from Jammu stopped the police from submitting the chargesheet in the Asifa murder case.

The police were also offered a bribe to prove the culprits of the accused, according to the chargesheet NDTV.

Even the police sub-inspector Anand Dutta and chief constable Tilak Raj did not collect important evidence and to wash Asifa's clothes, to prove the evidence, the chargesheet said.

On Thursday #Kathua and #justiceforAsifa hashtag spread through social media 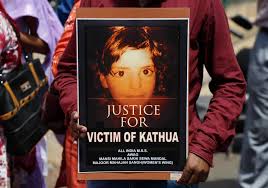