The long 82 game NBA season is slowly coming to its precipice. Teams have roughly 20 games left before the playoffs start. As the season gets into late February / early March, the playoff race starts to heat up. Even die-hard fans tend not to check the schedule in the dog days of winter. Take a look at the standings this year. While trying to avoid hyperbole, the Western Conference playoff race might be the most tightly contested race in NBA history.

Just take a look at the standing as of March 5th... 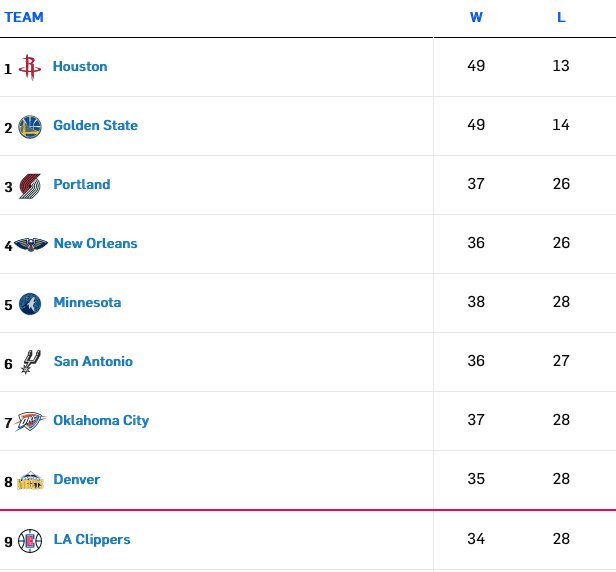 The 3rd through 9th seed all have 26, 27, or 28 losses! 2.5 games separates 7 teams. (On a recent podcast by Zach Lowe, neither his guest nor himself could ever remember a playoff race being this close.) It really is quite astounding. One small losing streak could sent the 3rd place Portland Trailblazers out of playoff in just a few games, for instance. Every single game has massive implications for these playoff hopefuls.

Take the New Orleans Pelicans. Demarcus Cousins goes down with a torn achilles injury last month. I was watching that game live. Even before it was officially diagnosed, everyone in the NBA world knew what happen. A non-contact injury where Cousins grabs his lower leg, reeling in pain. "It's his achilles" was echoed through the NBA.

From there, most assumed the Pelicans playoffs chances were over. Losing your second best player, in a team that is overly top heavy, just sucked the life-blood out the organization. Then Anthony Davis happened.

Anthony Davis has had some monster games in February:

MVP push or playoff push, it doesn't really matter. What matters, Anthony Davis is single-handedly taking this team to the playoffs. The Pelicans are on an 8 game winning streak. Including 2 overtime wins and a Double-overtime thriller against the Brooklyn Nets. Thrusting them into the 4th seed of the playoffs. Home court advantage in the 1st round. Which has not happened in Anthony Davis' tenure in New Orleans. It would be momentous not only for the organization but for the city to have a playoff team back in the Big Easy. If the playoffs were today, they would face Minnesota Timberwolves, who also just lost their superstar, and at at current are not handling it as well. Jimmy Butler, who has been become the leader of a young Timberwolves team went down with a meniscus tear last week. A lot is yet to be decided. All the Timberwolves said Saturday is that Jimmy Butler, who fell to the floor clutching his right knee in the third quarter of a loss in Houston, had an MRI that showed a meniscal injury.

The Wolves, in the middle of a stretch run in a hypercompetitive Western Conference where nobody other than Golden State and Houston has created any kind of separation, will have to go forward without Butler for a while. It remains to be seen if he will be back in the 4-6 weeks timetable stated by the Wolves management.

As the head coach of the Timberwolves As Tom Thibodeau has said over and over this season, Butler’s impact on the team goes far beyond just the numbers, his leadership changing the direction of a franchise that hasn’t made the playoffs since 2004.

He has been the man with the ball in his hands at crunch time.

Now others will have to step up, on a team with a rather thin bench to begin with.

The last time Minnesota make the playoffs, seems like an eternity ago. Kevin Garnett was still in Minnesota and Lebron James was in his 1st season in the NBA. It has been that long. Without Butler, Minnesota has gone from 3rd to 5th place. But appears to be continuing downward thanks to the injury.

The team will see Jimmy "Buckets" Butler back in action by the time the playoffs start but will they be able to stay afloat in the mean time. 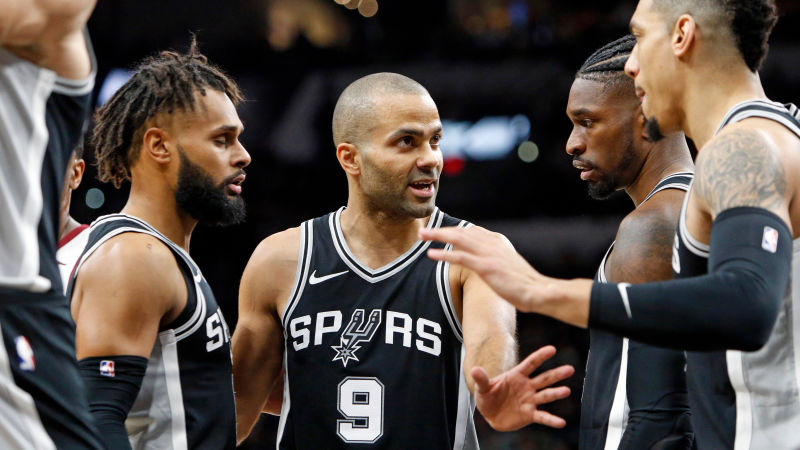 The team that is possibly the most interesting enigma in the entire playoff race...The San Antonio Spurs. The Spurs are in trouble, or at the very least, uneven footing. They continue to be without Kawhi Leonard, out for all but 9 games this season; LaMarcus Aldridge, who missed Saturday’s loss with an injured ankle, has been gimpy for weeks.

The crisis is, they’ve lost eight of 10 and fallen to sixth in the West; Anderson, Forbes, Bertāns, and various shambling mummies may not be enough for the Spurs to quite keep pace with the Rockets and Warriors, if they do not get their 32-year-old earthbound back-to-the-basket power forward back soon. Things could become unsettling indeed.

Every year the Spurs fly under the radar, not given the credit they deserve. This year seems like it is a little different.
At 36-27, it just feels different.

The Spurs are not on pace for a 50 win season. The first in 20 years. Think about that. The most consistent, stable, bed-rock, well coached, methodical, continue-to-add-superlatives franchise in not just the NBA but in North American Major sports might not reach .600 winning percentage.

Are the spurs going to make the playoff? I would bet yes. You just cannot go against Coach Pop and the system in San Antonio. So who gets left out of the big dance?

So for 6 playoff spots, 7 teams currently are within 2.5 games of each other. My gut instinct, the Oklahoma City Thunder.

On the surface that is fine. But in the last 20, the Thunder have beat: The Sacramento Kings (2x), Memphis Grizzlies (2x), Phoenix Suns, Dallas Mavericks, Detroit Pistons, Brooklyn Nets & Orlando Magic.

While losing to every team with a winning record other than the Warriors once. So the Thunder beat the teams that are the bottom-feeders of the league while struggle against the winning teams. Well, there are no bottom-feeders in the playoffs.

It just feels the momentum is not in their favor. The Wolves will hold afloat until Jimmy Butler comes back. The Spurs will be the Spurs and prevail. The Denver Nuggets and the LA Clippers are both 7-3 in their last 10 games. The Nuggets are hanging on to the last West playoff spot and own a tiebreaker with the Pelicans. OKC lost tiebreakers to the Trail Blazers, Timberwolves and Pelicans so far, but the Thunder do hold the advantage over the Clippers and Jazz.

If that is too much math, just know this, if the Thunder continue on their current trajectory of only beating the bottom teams, and winning very few against the best in the West. The chances are slim for the OKC Thunder.

No matter which way you look at it, the final stretch of the NBA season is going to be indeed, the Wild West.