The NBA-Holes Column: Is there light at the end of The Brooklyn Tunnel? 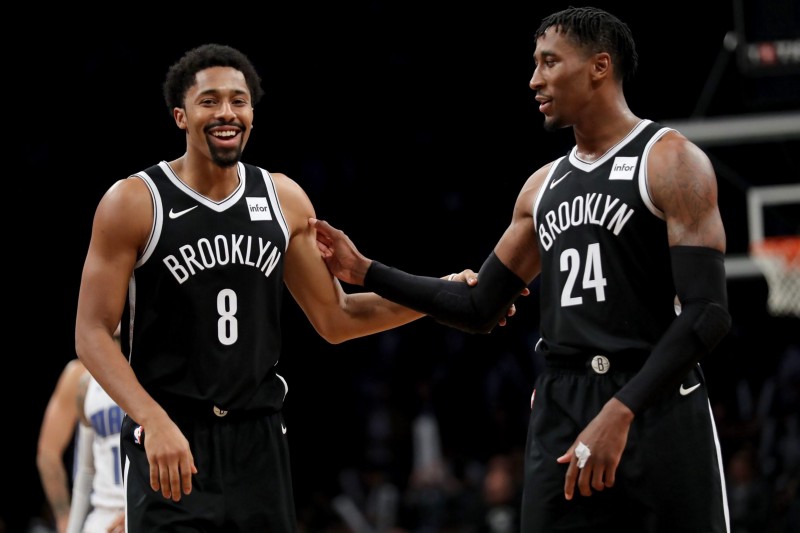 Spencer Dinwiddie (left) has proven to be a big part of the re-birth of the Brooklyn Nets.

When gambling at the high stakes table, you need to have full confidence in yourself and be all in. Based on the flop, turn and river, you either leave the casino on top of a tsunami of joy or in a puddle of your own tears. Both are guaranteed possibilities. However, the true payoff is in the journey to veracity.

In the Summer of 2013, the newly re-christened Brooklyn Nets traded a menagerie of players and future draft picks to the Boston Celtics for a trio of post-prime players and perennial all-stars. The hope being that such a move would make an impact in their fledgling years at the corner of Flatbush and Atlantic. Along with several earlier roster moves, an impact was something that was certainly accomplished.

Hopes were high for Nets fans following the move for Garnett, Pierce and Terry.

Following the acquisition of Paul Pierce, Kevin Garnett and Jason Terry, the Nets played slightly above .500 for the 13–14 season and managed to make it to the 2014 NBA Playoffs. Brooklyn would initially get past a young Toronto Raptors team in the first round, only to lose to the eventual Eastern Conference Champion Miami Heat, in the second. The initial results of a very risky experiment seemed mildly successful, despite the concern of building a roster on aging talent.

After season one of the venture, Pierce would leave for Washington and Terry would head to Houston. The Nets were now back at square one with a depleted roster, several fewer upcoming draft picks and a 38 year old Garnett, who clearly wanted out. The veteran forward/center was traded back to his initial club, Minnesota, in February of 2015, which proved to be the culmination of what was now viewed by all as a catastrophic disaster. Down and out, the Brooklyn Nets would continue to play to a combined record of 79–167 (a win percentage of .321) from 2014–2017, finding themselves among the proverbial ashes of the phoenix that was perhaps to be.

In February of 2016, the Nets cut ties with general manager Billy King and took a chance on a young executive in Sean Marks. Marks, who had been a player for several franchises and later an assistant coach/assistant G.M. for the San Antonio Spurs, seemed like an opportunity for a fresh start. Amid several adversities, Marks began to move pieces and work with the draft picks the Nets still had, resulting in what has proven to be a roster that is willing to fight, nightly.

To steal a phrase from 1964’s Rudolph the Red-Nosed Reindeer, “this is The Island of Misfit Toys.” The term, of course, being used with admiration and love. How could you not applaud a group of players who compete for a wasteland of a franchise, trying to find it’s feet with little to no financial resources? On draft day 2017, Marks made his impact felt as new general manager. Along with drafting Texas center Jarrett Allen, the Nets moved the rights to the #27 pick and longtime Net Brook Lopez to the Los Angeles Lakers for center Timofey Mozgov and the 2015 #2 overall pick, point guard D’Angelo Russell. It was viewed as a tough but necessary move. Lopez, who is the Franchises’ all-time leading scorer at 10444 points, was a fan favorite but was clearly not what the Nets needed. They needed an offensive leader; a guard. Thus, the move was made.

Fast forward to November 13th, 2017; reports surface that Russell will “miss a few games” due to a recent knee injury. That injury would later result in arthroscopic knee surgery. Amid the early stages of a new beginning for the franchise, sudden disaster had seemingly stuck again. However, despite losing yet another point guard in addition to Jeremy Lin, Brooklyn found an unsuspecting understudy in fourth-year journeyman, Spencer Dinwiddie. Dinwiddie, a former pick of the Pistons in 2014, had not really found any measure of success in the league until this season. In extended playing time, Dinwiddie has amassed averages of 13 points, 6.4 assists per game and has shot 36.3% from 3-point range, this season. It has been a much needed shot of adrenaline to a young offense.

Along with Dinwiddie’s blossoming, the Nets have found moderate success with 23 year old small-forward Caris LeVert. The young forward was acquired by Brooklyn in a move that saw Thaddeus Young head to Indiana. LeVert, in his second year, has averaged 12 points, 4 rebounds and 4 assists per game, in just under 27 minutes per game, which has proved to be a valuable asset. Additionally, the Nets have acquired shooting-guard Allen Crabbe from Portland who is shooting 35% from 3-point range, veteran forward DeMarre Carrol from the Raptors and 2015’s #3 overall pick Center Jahlil Okafor from the 76ers.

It may not seem like much now, but the Nets have turned nothing into something.They now have a roster of underestimated talent, young prospects that other organizations have foolishly lost faith in and a veteran presence at the bedrock level. If you had told any fan two to three seasons ago that this is the position Brooklyn would be in, they would have signed up for this in a heartbeat. True, a 15–24 record as of January 7th might not be what everyone would have ideally dreamed of but they are certainly a lot closer to a .500% record than they should be. The bottom line is that the Nets have three picks in the 2018 NBA Draft (1 in the first, 2 in the second), three picks in the 2019 Draft (same as 2018) and a current roster with an average age of 24.7 with more youth on the way. Not bad for a franchise that was essentially on life support in May of 2016.

The message here is not that the Brooklyn Nets held a fire sale and liquidated assets in hopes of a re-birth. The situation at hand is that wise management has formed a hardened ball of clay into functioning modeling material, once again. That, in and of itself is a feat all organizations would strive to accomplish in times of trouble. Times may be tough right now, but not for much longer. The rising phoenix of The Island of Misfit toys is upon us. Sit back and watch.

Upvoted! keep them coming, like the work you put in.
Brooklyn will be fine in a few years

THANK YOU! I used to write for a small sports website and was not getting the audience I was hoping for. I am very new to Steemit but I am very impressed by the community

Brooklyn is literally turning one man's trash into treasure. Or atleast more than trash.