The Ghost Fleet : Layers of War, Now An Environmental Mecca Back in 1917, The Great War was at a climax. America was rushing to assemble a massive fleet for the purpose of securing the passage of soldiers and supplies across the Atlantic Ocean. The States had numbers when it came to battleships, but transportation of wartime goods was becoming increasingly burdensome. Just over a 100 years ago, then President Woodrow Wilson called for the largest shipbuilding effort in American history.

Off the coast of Maryland in Mallows Bay, one thousand 300 foot long steamships were ordered to be built. The 18 month effort would total nearly 1 billion dollars. But, on November 11th, 1918… the war came to a close.

Germany surrendered and the Bay was literally swamped with half-made steamships. It was a mess. The government discovered that of the 1,000 ships they has commissioned, only 264 were completed. World War I was finished, and America had a huge surplus of poorly constructed leaky boats. To add insult to injury, Diesel engines were becoming the hottest trend of the coming decade… and these boats were of the coal-burning variety.

So what could Mallows Bay do? 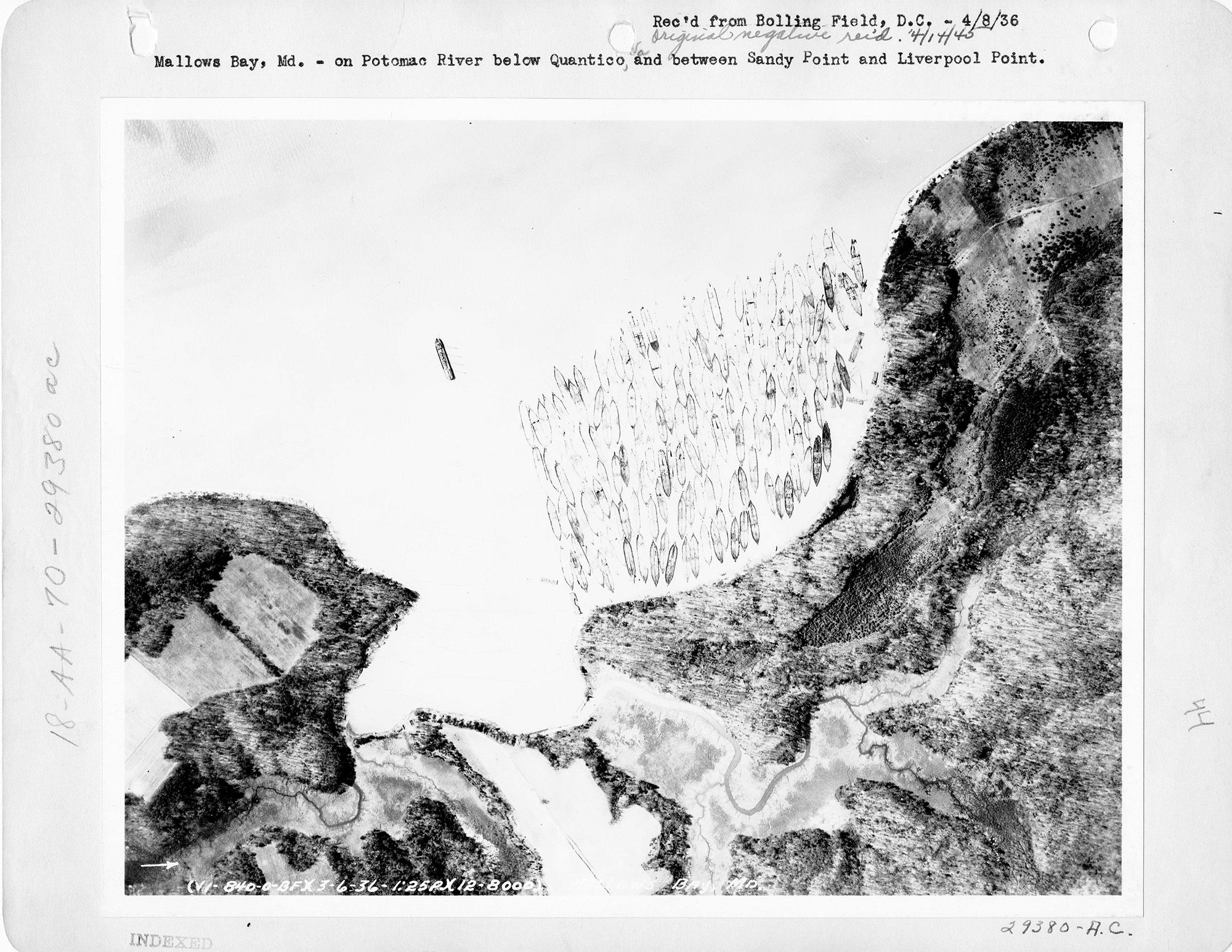 A couple of years later, in 1920, the United States Congress issued legislation to sell and salvage good materials from the half-baked fleet. The Western Marine & Salvage Company bought 233 ships for $750,000 with a plan to relocate the ships to Widewater (Virginia) and later burn them. But, believe it or not, Widewater protests from fishermen and environmental activists (yes, in the 1920’s) prevented the transport and subsequent burning of the ghost fleet. In a panic to recoup their investment, WMSC set fire to the ships in-place at Mallows Bay, hoping it would be easier to salvage metals once the wood frames had burned away. It was the end of the 1920’s and salvation budgets were tightening, right when you thought the story was nearing the end…

The stock market crashed, WMSC went bankrupt, and the Great Depression began. Half burnt and partially stripped away ships sat for another decade. Exposused to the elements, “the Bay” became a graveyard. History has a way of repeating itself. As World War II began, a new need for iron resurfaced. All eyes turned back towards the Bay of Blunders with the hopes of flipping some quick and dirty metal.

The United States government commissioned Bethlehem Steel to recover iron from the rotting ships that still remained. But the seemingly simple task became increasingly expensive. Bethlehem spent well over $250,000 on surveying and preliminary salvaging before rolling over and admitting defeat.

A New Lens on Shipwreck Alley

It took 50 years (until the 1990’s) for someone to work up the bravery to re-explore this cursed coastline. In 1993, a federal grant was approved to explore the environmental impact the ships had on the surrounding ecosystem.

To the surprise of scientists and excavators, the original posse of steamboats was also mixed up with other ships of multiple time periods ranging from Revolutionary War Era longboats to massive automobile ferries of the 1980’s. It seems that over the last few hundred years, Mallows Bay had become a common dumping ground. A Mecca for Wildlife

As mariners continued to drop off dying and unwanted ships, a microcosm of wildlife was actually blooming. Flora and fauna began to thrive in the unique in-between of half sunken ships. An unlikely habitat began to rely on the palimpsest of junk that floated in every time a war was started (or ended). This stretch of the coastline has developed into a useful pitstop for migratory birds as they navigate the Atlantic.

"You've got these osprey nests on the front of the boats, and heron rookeries, bats breeding in the hull of the ships -- it's a really rich wildlife and historical location." - Joel Dunn (CEO of the Chesapeake Conservancy) 2

Today, Mallows Bay is an officially designated national marine sanctuary. It’s amazing to think that this place, once wrought with misfortune and economic disaster has now become a prosperous haven for wildlife. While this isn’t the first time a ruin has become home to wildlife, it is certainly a powerful contrast from how this story began.

A fantastic rich fabric of nautical history taken all the way to the present moment! What an excellent post. We should go sailing this summer!

YES. Let's get out there and explore some Ghost Fleets.

Perhaps you guys could use it as a cool backdrop for some @hardfork-series dystopia scenes? ;)

Nice story I would say. Though I'm not an American citizen , I find this story amazing , because we experience such situation in my country although the story is not entirely similar with that of America. That's one good thing about nature which is the ability to heal themselves when ever they are damaged by man. Who would ever believe such a place that have been severely damaged can ever become a place of marine wildlife, even designated as the official national marine sanctuary.... Thanks for this informative article.

Thanks for your thoughtful reply @blizzo! It's amazing to see such a reversal take place. And there are many mysterious sites like these all over the globe.

Thank you for sharing this @voronoi. This happened a few times in remote beaches in Ireland; not with ships, but with old, abandoned houses. It really is a sight to see when wildlife incorporate their habitat with old structures such as boats, houses etc.

I love scuba diving, and would really love to explore some abandoned structures like the ones that you mentioned. Thanks again for sharing!

Scuba diving in this area would be fascinating! I believe they do offer kayak tours... I'm going to try and check it out this summer :)

Oh, I might check it out myself! I'll be travelling this Summer, it could be a cool place to go.

amazing i never hear about that fleet.
some ship are like island now.
But what about the pollution due to all these shipwreck?

It's definitely still a sensitive site. Though the majority of the steamships built here were made of wood and iron (not plastics or too many chemicals). If the same thing happened today (with modern ships and materials) I doubt there would be wildlife like this for a long time.

It reminds me of Tikal National Park and Mayan ruins all across Central America. There are these massive hills in an area that is usually flat, and they are Mayan temples underneath! Mother Nature has just reclaimed the area. A similar thing happened to cars left behind post Fukushima, nature began to grow into them. Anytime we leave something behind and don't bother it again the earth begins to reclaim the space.

It's pretty cool to see that in a marine context at that large of a scale! Thanks for sharing!

Should the war not happen in the world, the war took the victim, even the homeland was also threatened

the ghost fleet....
story of science

An amazing story from you @veronoi
These ship will cause pollution and hazard to man and animals. How can this be solved looking at the ships turn island

Good article.. Nice to read this story. Thank you

wonderful story @voronoi, it helps give me a hopeful perspective to see how nature has a way of creating new life amidst loss and disaster!

Beautifully written! Must share a correction, however. The site is not officially designated as of yet. It is a proposed National Marine Sanctuary, and folks are still working hard to advocate for the official designation.