Lesbian Seagulls: The Discovery that Shook Up Conservatives' Core Beliefs in the 70s The discovery, published in 1977, triggered a controversy that shook the core of conservative Christianity and right wing of US politics. At the time it was the first published work on homosexuality in any wild animal.

George and Molly Hunt, a pair of married scientists, were headed out to a small island off of Santa Barbara, California, in 1972, to initiate a research on the behavior of seagulls living on that location. While George would come back to the island every 10 days due to appointments in the University, Molly would stay, camping out with a small group of college students.

After finding a pair of female seagulls nesting together taking care of their eggs like any other seagull couple, Molly called George who couldn't believe in the news. But Molly was right. There were lesbian seagulls in California.

A DISCOVERY HARD TO DIGEST

The discovery, published in 1977, triggered a controversy that shook the core of conservative Christianity and right wing of US politics. At the time it was the first published work on homosexuality in any wild animal. The extreme right clearly had a hard time to digest it.

Their prevailing argument against homosexuality was that it wasn’t found in nature therefore, it was against God’s will. The presence of happily coupled female gulls poked a pretty big hole in that logic.

Complaints came in from all over the country. One group out of New York published a statement proclaiming that “100% of the seagulls in the five boroughs of New York City were heterosexual.” A business owner in Orange County, California took out a newspaper ad condemning the study: 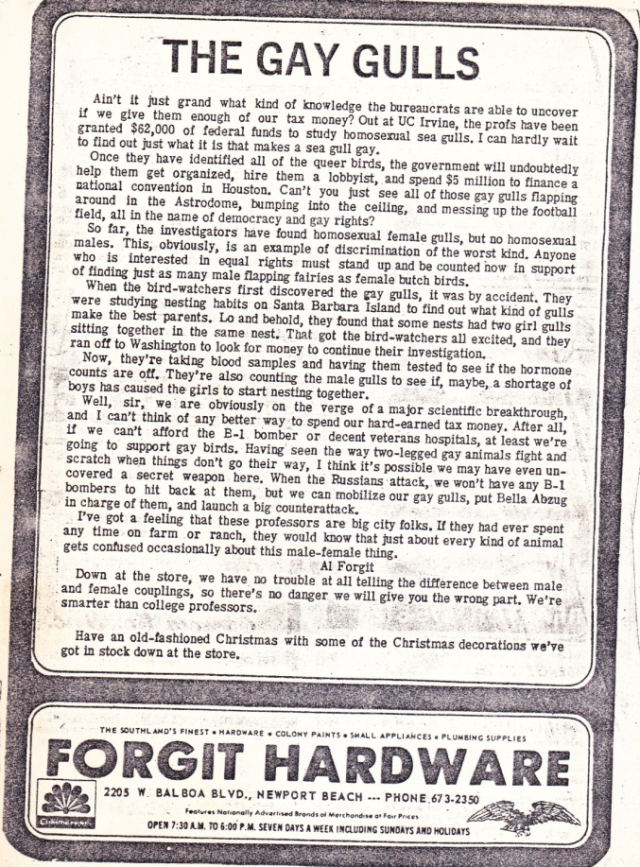 The discovery was also portraited on the newspaper cartoons: And George Hunt started to receive letters from people across the country to let him know that they had known about gay animals for a long time already. The Hunts found that 14% of the gull pairs on the island were comprised of two females. In addition, they had fertile eggs, which means that females were consorting with males at some point. But the birds appeared to use the males only for procreation, returning to each other to raise their eggs.

And once paired, the lesbian couples would keep staying together from one year to the next. Gulls are known monogamists.
The scientist afirmed that the birds were perfectly healthy just like their offspring who were just as capable of raising healthy offspring as their counterparts that grew up with male-female parents.

This was not exactly welcome news in Washington, DC causing the scientists to have their budget cut and fundings held up for 10 days. After George and Molly got divorced, George continued the research, teaming up with new colleagues in 1978 to find a reason for the gay gulls. First they checked the gulls’ hormones, finding nothing abnormal. They tried to identify if any of the individuals in the female-female pairs were more masculine endocrinologically than others but it turns out they weren’t.
Then, they looked at behavior which pointed to no problem as well. George and other colleagues rejected the hypothesis that female-female pairing is the result of either the adoption of a ‘male’ behavioral role by one or both partners, or an extreme ‘female’ role by one member. These were two female gulls, being female gulls in every conventional sense—aside from their long-term relationships with one another. THE LESBIAN BEHAVIOR CAUSE ACCORDING TO GEORGE HUNT

The female-female pairing phenomena disappeared on the island by the 1990s before George could find a biological cause. The best reason he could find was a basic lack of males. There was a heavily skewed sex ratio on the island where the number of females was much higher than males. And the lack of males was probably due to high mortality caused by the exposure to DDT, the insecticide that was banned in the US in 1972, but would have taken a number of years to disappear from gulls’ food sources. DDT builds up within fat; female seagulls were exposed to the chemical too, but they could hypothetically offload the DDT from their bodies into the fatty yolks of the eggs they laid. Males had no system to rid their bodies of the chemical and would die from a lethal dose when their bodies used up fat stores during cold winters.

Since then, homosexual behavior has been documented in many hundreds of species, though an exact number is hard to come by (the New York Times suggests 450, the University of Oslo put the figure at 1,500), with various animals—albatrosses, for example—exhibiting the same type of apparently non-sexual, long-term, same-sex pairing the Hunts found in the gulls.