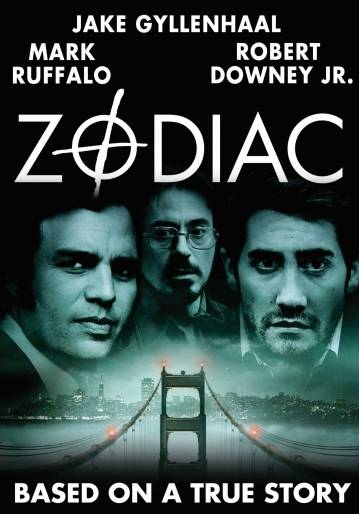 For some people, the length of the movie might turn you off. I mean, it's over 2 and a half hours. Some people can't watch a movie for that long. But, despite it's run time, it is an amazing film. I'm one of those people that has a fascination with serial killers, so it was only right that I enjoyed this movie as much as I did. I mean, anyone that knows the whole story of the Zodiac killer knows that he was never caught, but, his identity wasn't exactly a secret. At least not for a few people. Zodiac was a serial killer with a big ego. I mean, he contacted the papers and told them to print what he asked them to or he'd kill more and more. Which he did, and without being caught. But to see first hand just how close they got, is chilling, and really leaves you questioning the justice system a bit. I loved everything about this movie.

This movie will keep you on the edge of your seat as it progresses. Jake Gyllenhal plays a cartoonists for the papers who gets obsessed with the case to find the Zodiac killer. So much, that he pretty much starts his own investigation to figure out the identity of this man whose been terrorizing San Francisco. At first he just seems like an obsessed citizen, with no police experience at all, but he's the one who ends up never giving up. Even after 3 years of never finding the guy, the cartoonist keeps at it, as if the days never passed. At first all these detectives that he bothers with all of his questions just think he's crazy and extremely annoying, but then he starts naming names and spewing out scenarios that are all too familiar. As his investigation furthers on, he comes up on a very valuable piece of information. Information that can almost definitively identify one of the biggest suspects in the entire investigation. Unfortunately, his efforts never saw a day in court, but, they did hit the shelves in a book he wrote, entitled "Zodiac", which sold many copies and was what this film was based on. Definitely watch this movie! It's amazing.

Very very long, if youre not interested you pobably won't make it through. Lol its a great movie, Robert Downey does a good job at playing a played out drunking journalist. The fact that they never caught the guy is super crazy, but then again they dont always find the killer.