Reflections of Nazis in the Park

Sometimes a little history allows us to see a lot better.

Artist Karyn Olivier describes her temporary installation, “The Battle Is Joined,” as “a mirrored remix” of Philadelphia’s “Battle of Germantown Memorial.” Olivier encased the century-old, 20-foot-high structure “dedicated to a Revolutionary War skirmish between American and British troops in October 1777” with acrylic mirror “as a way to bring people closer to one another, their surroundings, and their living histories.”

“It will transport, transmit, express and literally reflect the landscape, people and activities that surround it,” she claims. “We will be reminded that this memorial can be an instrument and we, too, are instruments—the keepers and protectors of the monument, and in that role, sometimes we become the very monument itself.” “My reinterpretation…will ask the monument to serve as a conductor of sorts. It will transport, transmit, express, and literally reflect the landscape, people, and activities that surround it.”

But sometimes meaning isn’t apparent from what we can see in reflections alone. That’s where history comes in. 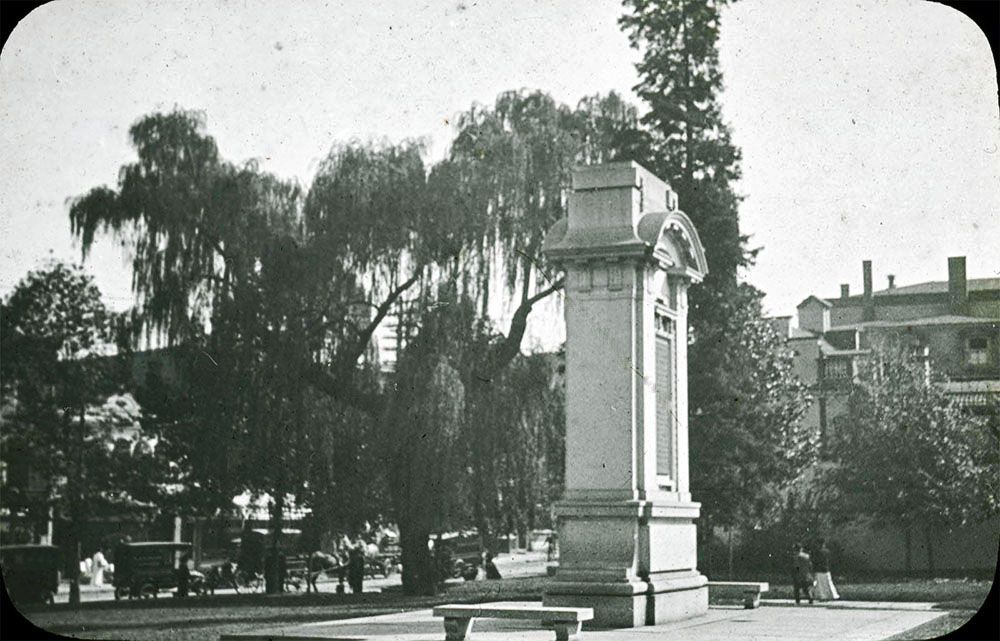 The Battle of Germantown Monument in 1913, John G. Bullock, photographer. (Source: The Library Company of Philadelphia.)

Not 100 feet away from Olivier’s installation stands a commemorative monument of the 17th-century German settlers of this part of Philadelphia long called Germantown. For many years, the Pastorius Monument served as a focus for Philadelphia’s annual “German Day” celebrations.

German Chancellor Adolf Hitler and President Paul von Hindenburg sent celebratory telegrams. German ambassador to the United States Hans Luther was invited to speak. But when he learned that the swastika flag wouldn’t be raised, he cancelled his appearance. “With three “Heils” for Adolf Hitler and three more for Fritz Kuhn, leader of the Nazi organization in this country, Philadelphia Nazis yesterday celebrated ‘German Day’ at the monument to Francis Daniel Pastorius, reported the Philadelphia Inquirer on October 10, 1937. “Three men who shouted ‘Down with Hitler’ were arrested by detectives and taken to Germantown police station, where two others who came to procure their release also were detained. …Swastika flags were intermingled with American banners at the meeting, while the black-and-white lightening flag of the Hitler Youth also was displayed. About 30 men and youths were clad in khaki uniforms of the O. D. Corps, corresponding to German Storm Troopers, and a dozen German war veterans wore their green combat uniforms.”

“Kuhn, head of the Amerikadeutschen Volkesbund, the American Nazi organization, had been scheduled to make the main address, but he drove up in a car, seemed disappointed in the size of the crowd, and drove away.” Karl Nicolai, chairman of the German American Bund visiting from Brooklyn, spoke instead, in German, concluding his address in English: “We will fight for the flag of the United States.”

Right after, reported the Inquirer, Vernon Park echoed with “heils” for Hitler and Kuhn.

The Pastorius monument spent World War II encased in a giant wooden box all its own.

That one had no mirrors.

Submit
$36.74
31 votes
3
Authors get paid when people like you upvote their post.If you enjoyed what you read here, create your account today and start earning FREE STEEM!
Sort Order:
[-]
simivalleyjeff53 (52)  ·  2 years ago

Here in Jerusalem, there is a section of town called "The German Colony". It is called that because there had been Germans living in that part of Jerusalem and and Jerusalem in general for 100's of years. The German influence and even Nazi were so strong that the German community was expelled by the British either before or during the Second Word War. The Nazis were also here.

Thanks @simivalleyjeff53. There's a lot of remembering to do - in many places around the globe. (It's a job, but somebody's got to do it.) And if it makes an interesting post and reply or two, or more. . . all the better.

I know. If people would just look beneath the surface there is so much there than they thought before.