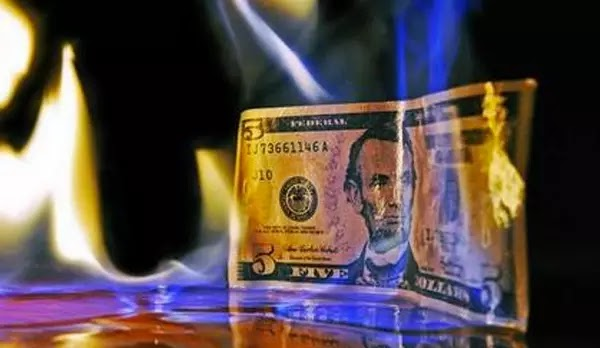 In the 1930s, Henry Ford (founder of Ford Automotive) remarked that it was a good thing the general populace didn't know how banking and money really worked, for if they did, "There'd be a revolution before tomorrow morning".

However, in mid-March 2014, something unimaginable happened. The Bank of England, alongside three economists from the Bank's Monetary Analysis Directorate released a paper outlining current banking practice, titled 'Money Creation in the Modern Economy'. This paper is unprecedented in that it explicitly stated that most common assumptions about the functioning of the banking system are incorrect. Further, the authors support outright that the positions of populist anti-banking movements such as Occupy Wall Street have been correct all along. Let me ask you some questions to ponder in light of this:

I challenge you to answer these questions to yourself, and then review your answers by the time you have finished reading this article. We will be reviewing the modern financial system, using the United Kingdom and the Great British Pound as a case study.

For centuries, the mechanics of the monetary system have remained hidden from the prying eyes of the general population. Despite this, its impact, both on a national and international level is perhaps unsurpassed. It is the monetary system that provides the foundations of international dominance and national control, and has an unprecedented impact on the quality of life of everyday citizens.

In recent years, as these very foundations are being shaken by endless escalating international crisis, the need for open and honest dialogue on the future of the monetary system has never been greater. Financial analyst Alessio Rastani highlighted the problem in a 2011 televised interview:

In 2010, the total monetary supply of the United Kingdom was 2.15 trillion Great British Pounds. Out of this total, only 2.6% was physical cash, amounting to 53.5 billion. 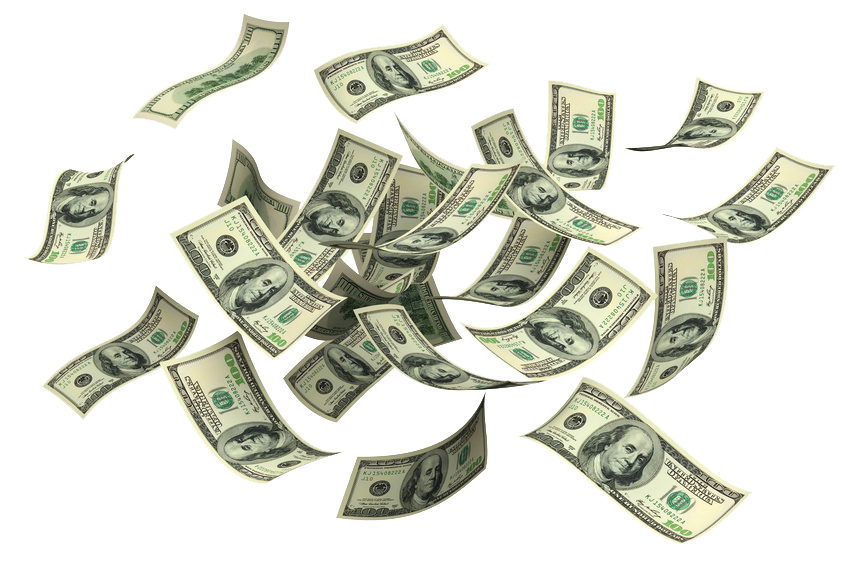 The rest, 2.1 trillion, or 97.4% of the total money supply was commercial bank money, which we will look at a bit later. The 2.6% of physical cash is minted by the government through the Central Bank in a process called seigniorage.

Seigniorage: Profit made by a government by issuing currency. The difference between the face value of notes and coins, and their production costs.

To elaborate on this process, when the Bank of England prints itself a ten pound note, it costs it about 3 pence to physically print that note. The Bank of England then sells it to a commercial bank at face value - £10. The profit, or the difference between printing the note and actually selling it for £10, goes directly to the Treasury. This effectively means all the profit ends up with the Treasury, which reduces how much taxes British citizens have to pay. Over the last 10 years, seigniorage has raised about £22 billion.

The reality is that most money today is not paper, nor is it metal coins. It's digital. Money is nothing more than numbers in a computer system. It's your Visa debit card. It's your electronic ATM card. It's all a big database, and digital money is what we are now using to make payments. This digital fiat currency is what we actually use to run the economy. I would wager a lot of people in the UK probably think that the government or the central bank is in control of most money in circulation and also issues new money into circulation, but that's not the case. It is in fact private banks that create the vast majority of new money and also decide how it is allocated.

There was a poll done by the Cobden Centre where they asked people how they thought banks actually operated:

So how does a bank really work? In the words of Professor Richard Werner:

'Lending' is basically an accounting trick. Banks create money. They don't lend it. When a bank gives out what is called a loan, it basically pretends that you have deposited the money. It has to invent the liability. This is how the money supply is created.

About 97 to 98% of money that's created is created as this bank "debt money", due to banks issuing money into circulation as loans. This is a very poorly understood fact. It is not a conspiracy theory. It is literally the way the Bank of England describes the process. For every pound anyone owns, someone, somewhere is paying a bank interest on 97 pence. 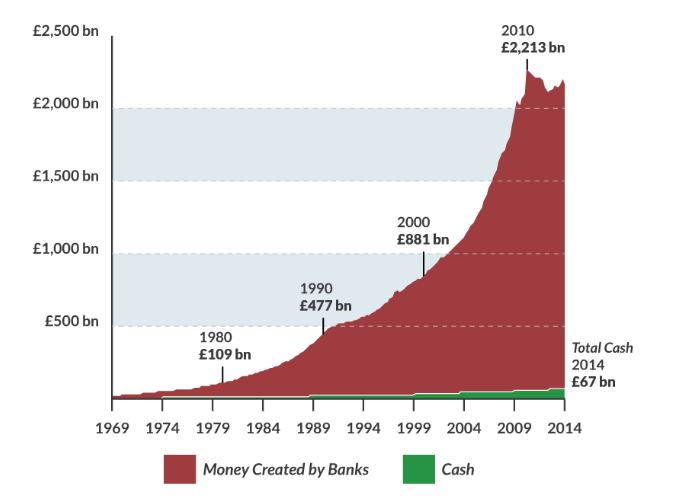 The amount of money banks are creating out of nothing is just incredible, to the tune of 1.2 trillion GPB in the last 10 years. That money is being distributed according to the priorities of the banking sector, not the priorities of society. From 1980 to today, the international banking sector itself grew from USD$2.5 trillion to USD$40 trillion by assets. To put that in perspective, in 1980 global bank assets were worth 20 times the then global economy. According to the UN, today they are worth an estimated 93 times the current global economy.

The banking system has such a huge impact on the world, but only because it supplies our money supply. We have to protect them. We have to subsidise them. We have to allow them to continue because the disaster of a bank collapse affects us all in a huge way. Anyone who says that we shouldn't have bailed out the banks doesn't quite understand the nature of our monetary system. Allowing a bank to fail is like eliminating a huge chunk of the money that we take for granted. However, bailing out the banks is also perpetuating a system which is never going to work. Whatever we do, we are always going to have this cycle until we separate how money is created and the activities of banking. Then the banks could do as they wish. They'd be a normal business like everyone else.

Does this sound like a system we have heard of before? Cryptocurrency

Cryptocurrency can return the financial sector to a level of stability not seen for hundreds of years. It is a well-knows fact that the single most significant marker of a civilisation on the brink of collapse is the debasement of its currency. This happened to the Greeks, to the Romans, even the Aztecs, and we are seeing it today in our own economy. Luckily, we have been fortunate enough to have a replacement on the back-burner.

Photo credit, in order of appearance:

Without a doubt; crypto will replace fiat. Gold and silver will likely have a role for a while too.

Definitely. The one part fiat got right in the past was having a gold standard, and precious metals will always have a place as a means of transaction. I would love to see a crypto backed by a gold standard appear in future.

I've heard people say that the Gold standard caused the great depression. Look at Bitcoin. No one wants to sell it because of the limited supply.

You're right, the gold standard caused significant deflation over time, which contributed to the problem. I wouldn't say 'caused it' outright, but definitely contributed.

The gold standard is great if adhered to from the start of a currency. Even so, a gold standard only works when everybody believes in the overall fiscal and monetary responsibility of the ruling body, and the relative price of gold is fairly stable.

No, the credit bubble blown before the crash caused the crash. The subsequent 'correction' was prolonged into a 'depression' because of government meddling. In 1921, they let markets correct themselves; is was over in less than 1 year. In 1929, they did not follow this option.

Education is definitely one of the big steps. It's really too bad that most people are satisfied to live the way that they think is normal, just collect paychecks and spend them for 60 years and hopefully have enough to retire.

When you learn how the whole game works, suddenly the normal way of financial life seems pretty crazy.

I agree on education being the solution, 100%.

And that's the whole problem, isn't it? Everyone is stuck in their own (rational) perception of how the finance system must work. If we all understood the actual system, the game would be up real soon.

This is a really well written article. The picture of the banker next to the Monopoly board is hilarious. I feel, next time it will be a bail-in not a bailout and savers will lose there savings.

Agreed, it's great to see a well-researched & well-communicated piece -- particularly when it's about what is arguably the most important topic to average citizens of planet Earth. I think there's still more work to be done to make sure the money interests don't derail crypto from the inside (besides not buying Ripple).

This happened in Iceland, where a lot of people and businesses had half their savings used to bail out the banks.

That being said, Iceland was the only country I am aware of that locked up the corrupt bankers that caused the problems in the banking sector.

I agree, and not only that - they are literally the cornerstone to saving civilisation as we know it when the banking sector inevitably collapses under its own greed.

Great Post!! Congrats Dutch! It's time for people to realize that our wealth is better save in cryptos.

Great post. I am following I'll also read that doc. The other incredible thing I learned while researching these topics is that almost all money is created though the housing market. This is the biggest and most common loan people have. All low rates do is spur the housing market. After a bust this doesn't work.

Then the banks get to steal the property out of money printed from thin air after a crash. Shocking.

The banksters are going to face the law of karma sooner or later. Great information, dutch!

thanks for the info thanks a lot for sharing and keep on posting ;)