Disclaimer: This is not financial advice. Always do your own due diligence before investing! 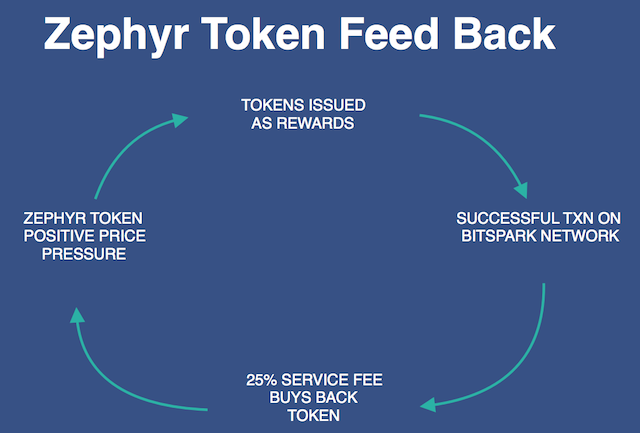 As of now the Zephyr token is still in an early stage, with the token sale just being ended about a month ago. However, it does have a lot to show for it!

When I heard this project was making use of the Bitshares ledger, it caught my eye right away. As a huge fan of Bitshares I got curious and began to read about it at once. For those who don't know what Bitshares is, in a few words; It's a decentralized token/exchange market, backed up by technology... that makes Bitcoin look like child's play. And by my knowledge currently has the best available technology when it comes to the cryptoworld.

The so called company Bitspark is the one behind the Zephyr project. Bitspark itself is a remittance platform, making money transfers with the use of blockchain technology. People can hand in their cash at one place, which then gets converted into crypto, and then back to another fiat currency to the choice of destination (being one of their cash out locations). And they are pioniers in this area when it comes to the use of blockain technology, having over 3 years of experience to show for! Being backed up by the Hong Kong government and some other big institutions. This here is one of the main reasons this investment is (for me) an easy choice. Secondly, I like what they are doing, as I only invest in projects I stand behind and see a future in.

Btw, they only started using Bitshares since the last couple of months. Currently they still use Bitcoin as well as Bitshares, in time migrating full operations to the Bitshares blockchain. The reason they decided to switch to Bitshares is due to multiple reasons, but simply put its being far more effective. Coming down to the fact that it enables them to fit their needs better.

So what exactly is Zephyr?

Zephyr is a token created with the use of Bitshares technology, rewarding people for being involved with the Bitspark remittance program. Whether it be by making transfers through the platform, liquidating/upping of balances, or referring other people, they all get rewarded with this token. To make sure for a healthy growth of the token itself, 25% of succesful transaction fees (from using the Bitspark platform) is used to buy back the Zephyr token through the Bitshares DEX (decentralized exchange). Right now the test fase is still in place for the implementation of the Zephyr token, but with what they've accomplished with Bitspark itself so far, being an already (top) established service, they have a lot to show for it!

For more information on Zephyr, including the roadmap and whitepaper, visit their website: Zephyr.bitspark.io

Currently Zephyr is only for sell at the Bitshares DEX: https://wallet.bitshares.org/#/market/ZEPH_BTS
Future plans are however to implement the coin on multiple of the greater exchange markets out there.

Bitspark is great company with fantastic management and a solid track record several years building a successful remittance business on top of Bitcoin. The fact that they are switching from Bitcoin to Bitshares says a lot about Bitshares!

Zephyr is very, very undervalued at the moment and Bitspark is working on listings with several large exchanges. When that happens ZEPH will probably pump hard to $1-2 very quickly - my opinion. ;)

I totally agree with it being undervalued. But since its token sale just ended and it's not even being implemented at the time being, also means its the perfect time to pick up now. Only hard thing about it (for me) was to trade in BTS for it ;P (O and yeah, once it gets listed on the large central exchanges its gonna give it a huge boost as well!)

Nice post and thank you for the details of cryptocurrency

Thanks for the heads up buddy! See you at the tables!

Got my order in. ty for the news This post has received a 26.59 % upvote from @booster thanks to: @droucil.

This post has been ranked within the top 25 most undervalued posts in the second half of Dec 05. We estimate that this post is undervalued by $35.93 as compared to a scenario in which every voter had an equal say.

See the full rankings and details in The Daily Tribune: Dec 05 - Part II. You can also read about some of our methodology, data analysis and technical details in our initial post.

This post has received a 10.78 % upvote from @buildawhale thanks to: @droucil. Send at least 1 SBD to @buildawhale with a post link in the memo field for a portion of the next vote.

You got a 1.85% upvote from @upme requested by: @droucil.
Send at least 1 SBD to @upme with a post link in the memo field to receive upvote next round.
To support our activity, please vote for my master @suggeelson, as a STEEM Witness

Hello, we are Project Araneobit - money transfer system based on the blockchain. The Commission for money transfer is set independently.
You can invest money.