Why Chinese Dominate The Philippine Economy My countrymen would hate me on this, but this is an indisputable fact. We are their employees in our own country. You still can't accept it? Here are the richest people in the Philippines according to Forbes: 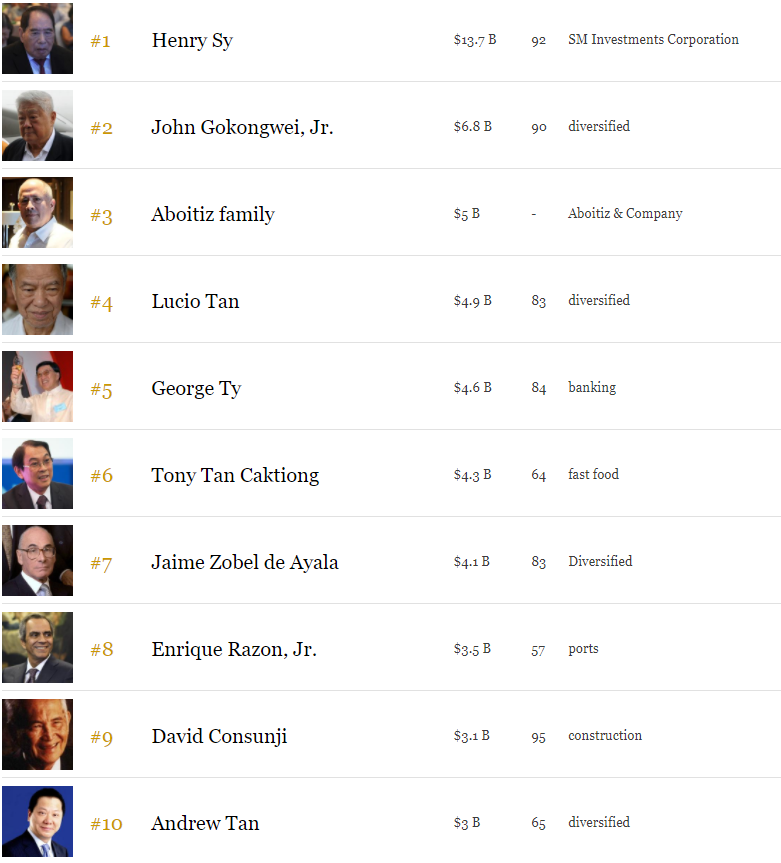 7 of the top 10 are Chinese families. The other 3 have foreign origins as well.

Now, why is this? Why are we very willingly letting them take over our country's economy? This is due to several cultural factors that are deeply rooted into Filipino's subconscious.

For the majority of its recorded history, the Philippines has been under foreign rule. Starting when Magellan went on his famous circumnavigational trip in search of spices. He made a wrong turn due to the lack GPS technology at the time and landed in the Philippines.

Spanish occupancy officially started in 1521 and lasted until 1898. Ow, what a glorious year 1898 was. Or so we thought. We were never freed, we just handed the reigns over to the Americans. The American's ruled until 1946 with the Japanese taking over a few years in between during World War 2.

These successive occupations by foreign rulers engraved in Filipino minds that other countries are always better than us. We boast of being nationalists but in reality, we worship foreigners. The majority prefer cheaply made foreign brands over quality, handcrafted local goods because of the predisposition that foreign brands are always superior.

II. Because we are taught to grow up to be slaves

Tough to swallow but it is true. I got this answer from a Chinese workmate of mine back when I worked in an audit firm. I asked her "Why are majority of Chinese rich?", a very straightforward question but we were close friends so it was fine. She answered "Because we are always taught from the start to become entrepreneurs. In your schools, you are always taught to be employees."

I was stunned when I heard that answer. But I said to myself: "Damn she's right!"

From a young age, in our homes or in schools, we are always told to study hard to become a good employee. We are never taught that being an employee is not the end game but just a stepping stone. The sad reality is, most of us never realize that fact and end up becoming employees for our entire adult life.

III. Because we allow them to

We simply assume that it's the way of the world. Whenever people see someone rich they instantly assume "Is he Chinese?" Another by-product of colonial mentality I guess. People never look at the how hard the person worked or if he owned a business. They simply assume he's rich because he's from a foreign land. Seemingly conceiting to the false fact that Filipinos have no right to be rich.

What We Should Change

More than anything, we simply have to change our mindset. Believe in our skills and feel that we are always inferior to others. We should also aim to be entrepreneurs or business owners and not settle as an employee. Unless that is your dream, of course, everyone is unique. But if you do choose the employee route, aim to be at the top.

Submit
$18.76
16 votes
6
Authors get paid when people like you upvote their post.If you enjoyed what you read here, create your account today and start earning FREE STEEM!
Sort Order:
[-]
jjnoriega14 (33)  ·  2 years ago (edited)

What you're taught in school can also be influenced by foreigners. The school curriculum is engineered in such a way, that it is designed to train your mind to fill someone else's pocket. It's good that you understand this, some people continue to believe that being an employee is always the final stop in life...but it really isn't

Personal finance and entrepreneurship should really be part of basic education.

Congratulations! This post has been upvoted from the communal account, @minnowsupport, by DogeKing from the Minnow Support Project. It's a witness project run by aggroed, ausbitbank, teamsteem, theprophet0, and someguy123. The goal is to help Steemit grow by supporting Minnows and creating a social network. Please find us in the Peace, Abundance, and Liberty Network (PALnet) Discord Channel. It's a completely public and open space to all members of the Steemit community who voluntarily choose to be there.

Their culture and the way they carry their economy leaves much to be said of this country,The labor is cheaper there than in another country, or that is what they are and the profits are higher, that is why they are rising rapidly.. Excellent post

This is not right for any country.