Shocking Discovery in US Money System, and How It Impacts Bitcoin and The Blockchain!

President Donald Trump has consistently voiced his promise to “Make America Great Again.” I think it’s a noble endeavor, and one that is definitely in the realm of possibility. However, it won’t occur without serious sacrifice and uncertainty (ie. risk).

I recently analyzed “economic sentiment” based on real U.S. GDP figures (in 2009 dollars). Economic sentiment in this case is defined as GDP growth throughout the entire spectrum of real GDP. What I found was a quite revealing and shocking discovery about our money system. 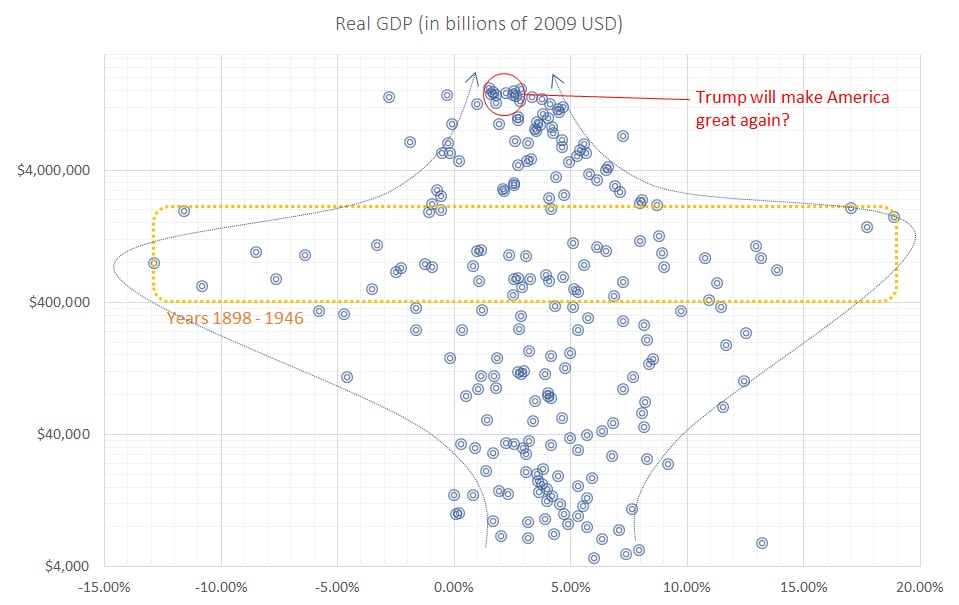 Moreover, these critical dynamics have important implications for Bitcoin, altcoin assets, and the entire blockchain “industry.”

Growth Necessitates the Existence of Risk

We’re often sold the lie that growth can occur in the absence of risk. The ubiquitous 401k is a perfect example. Rather than abide by the pension system, employers now sell us the 401k – given enough time (say, 40 years), all the risks in the investment markets will even out, thereby virtually guaranteed us tremendous return on our money.

But is that really how it works? Plenty of folks (naturally) panicked in the 2008 global financial crisis, destroying their portfolio by essentially cutting their money in half.

Take a look at my economic sentiment chart. You’ll see that the period of greatest growth in our economy, which occurred in the years 1898 to 1946, also was a period of tremendous fear and volatility.

You can explain this with the S-curve model of market saturation, which I believe is very much valid. But without taking some risks, both our money and our economy will simply continue on a stagnating road.

“Instability” is Good for Bitcoin and the Blockchain

Bitcoin and blockchain critics always, without deviation, warn against the digital market’s extreme volatility. However, in order to enjoy the robust gains that you see in this sector, you must have that risk quotient present.

Again, look at our money system, and the economic infrastructure. Our greatest growth rate occurred during periods of extreme fluctuation. We were pioneering into new ventures – and even wars – and while such actions were costly, they also sparked new industries and opportunities.

You simply cannot grow without risk…it is simply impossible. Put your money into a “safe” money market and you’ll see what I mean.

Hence, these criticisms against risk are exactly what makes bitcoin and the blockchain so special. Indeed, the risk quotient is what made the U.S. economy so special. Rather than employ an economy of indentured servants or a fiefdom, the U.S. opened the door to free market capitalism.

Yes, what resulted was plenty of chaos. This would later be termed “growing pains.” But growing pains is still growth. You’ll never hear the term “stagnant complacency” because this is not something for which we strive.

Remember, anything worth pursuing involves risk!

Adsactly Bravo, Bravo!! Your post are really Mewtacular!. It inspires me to be a better me. I am learning so
much not only from the information on your post, but also about presentation and design. Thank you!