Monacoin, a cryptocurrency legend from Japan

Speaking of the virtual currency Bitcoin is a representative, but various other virtual currencies have been developed, competing for features different from Bitcoin. Meanwhile, the characteristic spread is showing from "Japan Monacoin" (Monacoin). 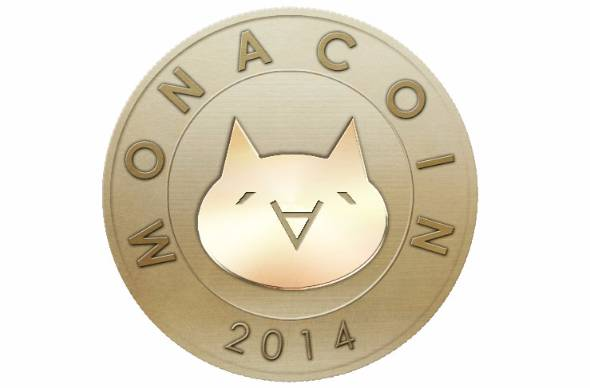 As its name suggests, it is a virtual currency derived from "2 Channel" cat character "Mona". A mona is drawn on the image illustration of the coin, it is a delicious atmosphere. From the origins of that joke like naming or 2channels, it seems to be a "play" coin, sometimes stupid as "Neat's Ojiki".

But this year the price soared. It was trading around 3 yen in January, but by attracting attention by introducing "Segwit" (compression of trading data) ahead of Bitcoin in the spring, in October the Japanese virtual currency exchange maximum Talking about listing on hand "Bitflyer". Temporary value of 700 yen or more was added, and it became known as "virtual currency in which price rose sharply".

The real value of Monacoin is not rising rate. Its practicality. Many Japanese engineers have developed services using Monacoin and are widely used. The scale is said to be called "the largest in Japan as a virtual currency community". Monacoin fans are called "Mona Coiners", and many people cut down their lives for dissemination.

End of October this year. A Mona Coiner gave himself a self-esteem of about 1.3 million yen, and streamed Monacoin's video advertisement with the public vision of Tokyo / Akihabara. To see the advertisement, Monacoiners from around the country gather in Akihabara. Some people also distributed free goods made on their own.

Monacoin is born at the end of 2013. It appeared in "2 software board" of the channel and was officially released in 2014. It is based on LTC at first, which is characterized by fast transaction processing speed. It can process at more than 6 times faster than Bitcoin. Developers are calling for "Mr. Watanabe" (Mr. Watanabe), but I do not reveal the identity.

Immediately after release, volunteers have developed various services using Monacoin and are actively used. The main use is "Takeoff" to convey the evaluation and gratitude to the opponent. There are platforms on bulletin boards, blogs and Twitter that can be tossed on interesting posts.

For example, the bulletin board site " Ask Mona " can use Monacoin, instead of "Like" to posts you like. Popular posts are noticeable as letters become thicker and letter colors change, and in addition, when the monacoin is given or raised, the "level" of the user rises, "Monacoin Makuyo!" And Monacoin indiscriminately to others are indiscriminately displayed People who hand out also appear every day. Bulletin board site "Ask Mona". There are many people who "scatter Monakoin" 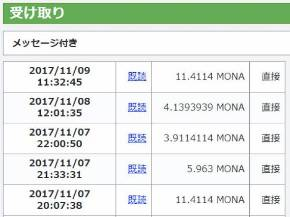 There is  " ALIS " , which was talked about by collecting 430 million yen in ICO (Initial Coin Offering) as a service designed as "a virtual currency can be obtained when posting highly valuable " , ALIS is collecting funds only by planning, the service is unpublished. Ask Mona is developing this as a real service since 2014.

" Tipmonaa " which allows you to trade monacoins among Twitter users is also commonly used. Everyone can use it because it is unnecessary for registration, and it is actively exchanged between the mona coiners, others who are sending to celebrity Twitter such as US President Donald · Trump and playing. There is also a plug-in called " monage " that can be tossed on a blog created in Wordpress .

If there is a flea market, there is also a shrine

It is also used to buy and sell goods and contents. " Monappy (https://monappy.jp/)" is a marketplace where various items such as coffee beans, tuna canes, rice and the like are sold from digital contents such as illustrations, cartoons and the like. A real store that can settle in Monacoin also appeared. In the PC store in Tokyo / Akihabara "PC SHOP arc (ark)", it is said that about 10 cases of monacoin decisions are used per day (related article: "Usage Size Beyond Assumption" - Virtual Currency for Parts Purchase Listen to the PC SHOP arc that introduced (https://monappy.jp/) . Akihabara maid cafe "Primo Pirma" also corresponded to Monacoin payment in November . In Monappy various merchandise such as "Monaco in cookie" and digital data etc. are sold 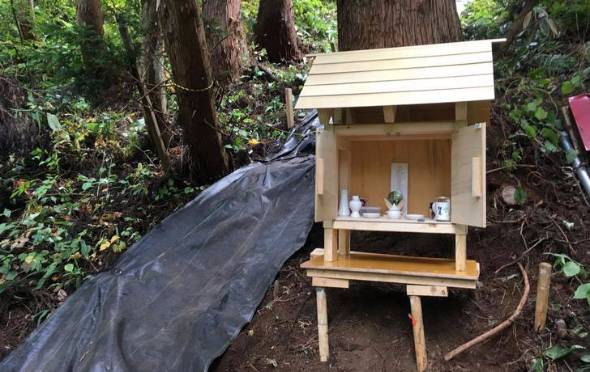 Somehow there is a shrine. It is "Monacoin Shrine" that "volunteered" by volunteers bringing shrines etc. to the land of Nagano prefecture Yamanaka traded in Monacoin. Although it is a mountainous place, the mona coiners regularly hold off-clubs and develop and maintain them while setting stairs, preventing snow, grass clippings.

A background of Monacoin being actively used, one person of Monacoiner · Mr. Nyantaro (Male · 30) will explain. "Even if there are opponents who want to give money without fail in return, such as wanting to convey appreciation or praise, there is not much such a mechanism on the Japanese yen platform.It can do it if it is monacoin."

Ark's Yuki Urata (33), who introduced the Monacoin decision to the store, said, "Monacoin can be delivered in units of 1 yen or less, so it can be distributed with a sense like handing chips." "It is already being actively used and when I noticed," Monacoin Economic Sphere "is being built, if introducing it in a store, it will help, it is possible to expect the possibility. At the Ark shop, Monaco in stickers were also distributed (October 27)

"Advertisement project" in which individuals invested 1 million yen or more

"Interesting if monacoin becomes popular." Think of that, some people are selfish for their propaganda.

A videos CM to PR for Monacoin flowed in one week at the end of October at the huge vision of the station front building in Tokyo / Akihabara / "Akihabara UDX" and "Akihabara Radio Hall". Funds necessary for selling CM · About 1.3 million yen was invested by Mr. Tanaka (Male · 29) of Monaco Inn Evangelist who was an individual investor.

"It is interesting to put on advertisement of Monacoin", it was triggered by the excitement of Slack in the group. Arrangement of movie production and voice actor, arranging delivery was handled by Nyan Tataru. Nyan Tataru purchased the Macbook for the purpose of CM production, but for the first time to use a Mac, he did not understand the operation and laughed, "I feel like I'm getting out of my mind."

When CM actually flows, many mona coiners visit Akihabara. Taking pictures and videos of CM and uploading it to Twitter etc., it got excited with "I really got it!"

Mr. Tanaka's investment of 1.3 million yen is a big money for the general public, but it is a cool face with "I am rich". It is said that they are goods by investing in Bitcoin and others, the bosom is not so painful. "I want to do more extensive things next year" next year.

In Akihabara at the end of October, there was "Mona Coiner to Get Self Own." On October 28, Mr. Sobanko (Male, 61) was dispatching 240 copies of gold and silver coins with character illustration that imagined Monacoin. We announced the distribution with Ask Mona and gave it as a set of two pieces to more than 100 mona coiners visited. 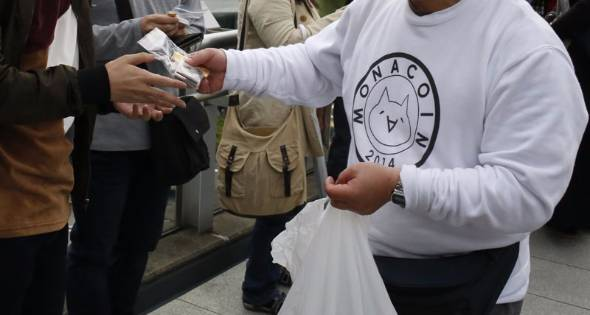 "I wanted real coins, I thought about making it myself." - I have made coins three times and distributed it free of charge. Production cost is 1,000 yen or more per piece. The total cost is about 800,000 yen. At this time, more people than expected were gathered and the prepared coins were exhausted, but "I make additional production and offer it to all people I want without charge for free delivery".

Why are you cutting yourselves and going there? One reason is "It's fun to have fellows in Monacoin." More than that, he seriously dreamed that "I want to spread Monacoin to the world," he said that they distributed coins as part of the spreading activity. On that day, Mr. Sobakko gave out two monacoins of gold and silver and a lighter with a Monaco in logo that was offered free of charge from Hokkaido's Mona Coiner "Monna Sparrow". Illustrations of 'Monacoin' drawn on a coin received from Mona Coiner 's "Ichi". I asked Mona Coinners with Ask Mona to decide what to do with the letters carved into the coin and decided

I knew Bitcoin in 2013 and received "shocked". "The currency is issued by the state," overturned the common sense, there was no administrative entity, the new currency operated by P2P "felt great appeal".

Like Monacoin is a Bitcoin, it is a P2P virtual currency. "Both Akihabara's advertisement and Monacoin shrine are doing well with individual individuals participating, not governments and big companies, I think it's wonderful, I hope Monacoin will be such a big presence as comparable to Bitcoin" (Sobanko san)

I've been mining Bitcoin and monacoins on my own PC. I sell Bitcoin, but Monacoin will not sell it even if it rises. "Is not it lonely if I sell it?"

What is the charm of Mona Coin

On the day Sobakko distributed coins, more than 100 mona coiners gathered in front of Akihabara UDX. Some people also deal "Monaco in Cookie" and "Monacoin Logo Pouch". As gifts of Monacoin on the net, we gifted each other and showed appreciation.

Mona coiners focusing on and shooting for Monacoin CM. Many men in their 20s and 30s were there, but there were a variety of young women and children's accompanying guests (October 28)

A woman who came all the way from Fukuoka (34) recently talked about Takafumi Horie's remarks and learned about monacoin and he said he was interested. "I knew the Bitcoin, but I knew there was a virtual currency from Japan, and it seems that my attachment seems to disappear.As a result of Ask mona's interaction, I felt that" Monacoin's throwing is fun. "

Palon san (20) of "Monappy" and "tipmona" developer developed both services when I was a high school student. "Monacoin was just born at the time, there was no service available, I thought that new technology would allow me to do something new."

Wakiyama P (31 · Male) says that it is attractive that "I can meet various people such as teenage young engineers and people from different industries" through the Monaco in community. He is the landowner of "Monacoin Shrine" and is also the manager of " Waki Tami Value Recording Association ", a service that gives monakoin to those who gave information on the character "Tamiyama Wakiyama" character of the game "Idolmaster Cinderella Girls" .

Cryptcoin Junkey (47 · male) who was visiting with his child was a developer of Mona-carte-based token issuing system " Monaparty ". I feel that it is attractive that "There are lots of dense people in the community, good relationships at reasonable distance". A 9-year-old son said, "Monacoin is a family member and it's a sushi festival, so I like Monakoin!" Nico Nico said.

The reasons for participating in the community are people, but it seems that it is a common item to love Monacoin and to feel comfortable to the community.

How much will the monacoin economic sphere expand? The "dissemination activity" of the mona coiners seems to continue from now on.