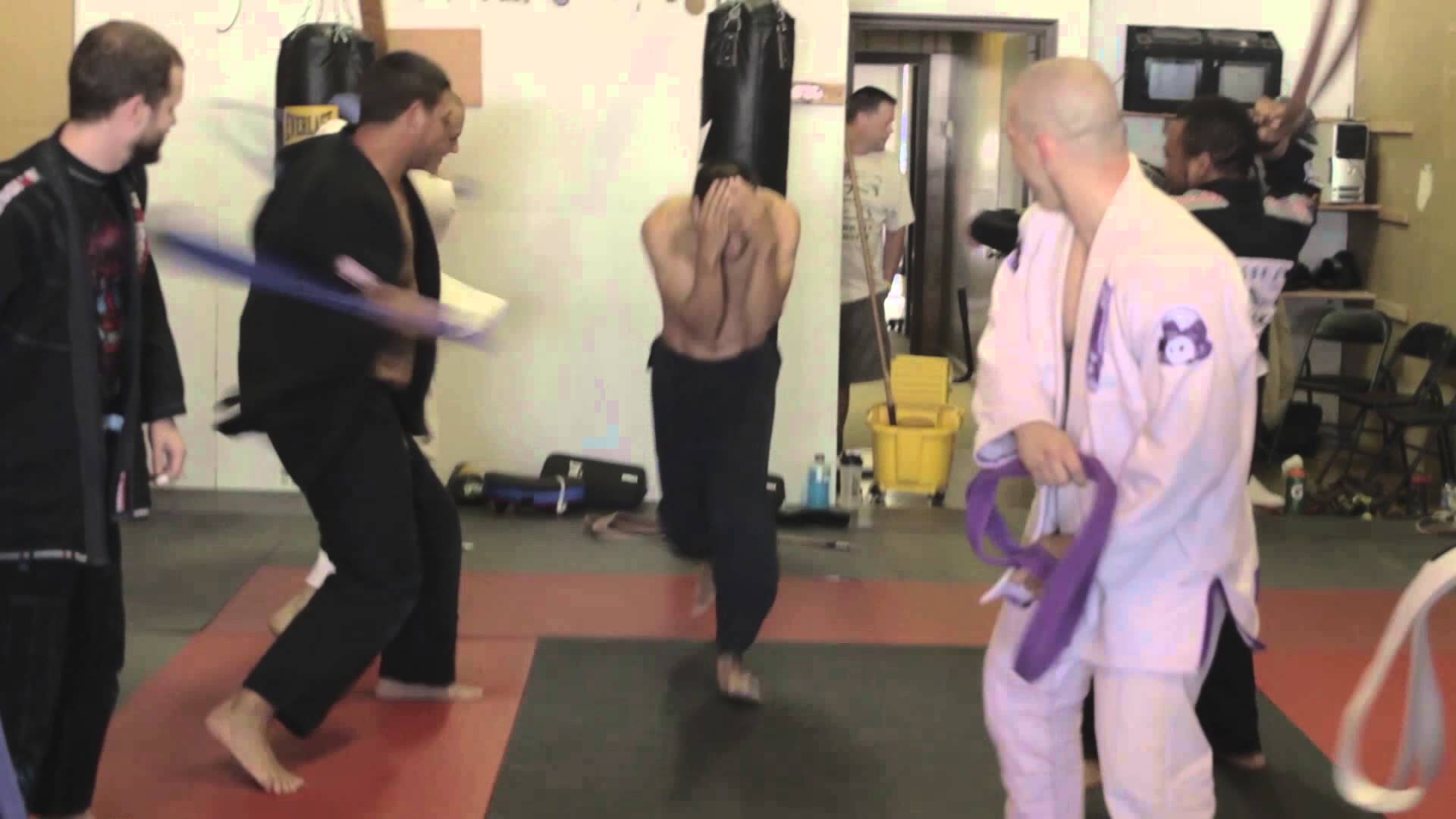 Running the Gauntlet is a tradition that more and more academies abandon every day. Recently an old video of WWE star Dave Batista (Bautista) resurfaced.


Batista walks like a champ but unlike many of his training partners his job involves a lot of physicality so it actually might serve a purpose. Modern Jiu-Jitsu academies abandon it because it’s a legal liability and to put it bluntly, it’s bad for business in a world where you can get to a 2 stripe brown belt level over the internet. How did the gauntlet start?

You might be tempted to attribute the gauntlet to Brazilian origins of Brazilian jiu-jitsu however that would be inaccurate as sources indicate the tradition stems from a Chris Haueter gym. For those who don't know Haueter, he is one of the first 12 non Brazilian bjj black belts.
Many bjj instructors who adopted the hazing ritual ended up regretting it. Among them is Fabio Gurgel, who has trained a number of bjj legends including Marcelo Garcia, Cobrinha, Gabi Garcia and many others. He wrote on his personal blog that he deeply regretted the decision to include this ritual:

" Perhaps my biggest mistake and that must have cost me hundreds of students was The Gauntlet .

It all started as a joke in my gym at the Federal Club where I began teaching classes alone in 1988, (my master’s gym did not have this custom), I’m not sure where I got this terrible idea but the fact is that I used it for a long time and it has spread in jiu jitsu at a frightening speed, possibly other teachers like me started on their own and maybe as many others I have somehow influenced, to those I ask my sincere apologies, however the fact is that this ritual became part of the jiu-jitsu academy’s environment, the students endured it and even liked it because it seemed like a test like the ones we see in war movies where military barracks prepare their soldiers to face the difficulties that are to come,the students felt worthy of that new belt for having endured that beating that in the end had no purpose.

Time passed and jiu-jitsu academies turned increasingly to the competition and always prioritizing the participation of tough students felt no need to change the promotion party after all being tough was almost a must, and what was a simple beating for a guy accustomed to suffering in jiu jitsu training for competition?

One fine day I had an experience that made me rethink everything in this respect, I had been studying and every day more understanding that we were moving away from what jiu jitsu needed in terms of offering jiu jitsu for everyone and not just for the class but at a promotion party we had the presence of the mother of a student who would be promoted on that day, she was at the beginning all proud probably expecting a glamorous ceremony (alias as it should be) when suddenly the “Gauntlet” was formed , shouts of “Uh he will die” were chanted by all the almost 100 students who were on the mat, and there was the kid going through that insanity, his mother was terrified and told his father that they should report it in a police station! The father was torn between the pride of seeing his son win the situation and conquer the dreamed belt and the one of calming the mother, the son was promoted and his happiness caused that the mother gave up to launching a complaint and only accepted to congratulate the son, but that for me was the straw and the proof that something very wrong was happening and that it was necessary to change.

Never again did I allow this to happen in my gym, but now the test is not resistance but technical, the belt exams have taken the place of the gauntlet and the result is arguably better, my students are submitted to a fair test and which confronts them with what really matters if my school is managing to teach them a good jiu-jitsu.

This change has not happened in isolation and therefore I can not attribute the growth of my academy to her alone, I have already told you about some changes that I have implemented in my school and that all together produce the result I have today, but I have a certainty, the gauntlet should be abolished from all jiu-jitsu schools in the world.

Scientific research offers great insight as to why it might not be the worst idea to see the gauntlet replaced or perhaps adapted to the modern times or at least controlled.
Vast majority of sociology research indicates that hazing rituals in sport situations exist because there’s a demand for an entry ritual and to mark the membership and identity within the team structure.

Many rationales exist for communities to maintain and construct entry rituals but the most important factor is the articulated desire for membership (Johnson, 2000). Membership is a rite of passage specifying a permanent change of status such as going from one belt level to the next in contrast to more transient membership where an athlete is already cross training and involved in multiple communities like one would do when training for MMA bouts for example.
Sport initiations differ from historical or cultural rites but it also has one significant aspect – “perceived” development of communitas. In terms of psychological research going through the gauntlet creates a sense of vulnerability and a consequent dependence on the group and its hierarchy.

Social psychology defines communitas as relationships between people that jointly undergo a ritual transition through which they can experience an intense sense of intimacy and equality which can be spontaneous, immediate and concrete.

But – if the ritual is marked with excessive pain, degradation or humiliation… all of this uplifting sociological research might be negated.

Most bjj academies are co-ed so a gender also plays a role. In general all hazing among men is more likely to be violent in nature while hazing among women is more likely to be psychological (Allan and Madden, 2008). But it doesn’t end there – when women participate in male dominated sports, the ceremony, in this case running the gauntlet, serves to reinforce notions of masculinity and as such can have drastic consequences to identity.

Have you gone through the gauntlet? What was your experience like?

Johnson, J 2011, ‘THROUGH THE LIMINAL: A COMPARATIVE ANALYSIS OF COMMUNITAS AND RITES OF PASSAGE IN SPORT HAZING AND INITIATIONS’, Canadian Journal Of Sociology, 36, 3, pp. 199-227, Academic Search Premier, EBSCOhost, viewed 29 October 2016.
Johnson, J. 2000. Sport hazing in the context of anti-hazing policies: The case of two southern Ontario universities. Unpublished master’s thesis, University of Toronto.
——— 2002. Are sisters doing it for themselves? An analysis of gender and the sport initiation ceremony. Journal of Canadian Woman Studies/Les Cahiers de la Femme 21(3).
——— 2007. The effectiveness of orientations as an alternative to traditional hazing practices. Unpublished PhD. Thesis, University of Toronto, Toronto, Canada.
——— 2009. From the sidelines: The role of the coach in effecting team unity and cohesion. The Journal of Coaching Education 2(1):1–28.
Johnson, J. and P. Donnelly. 2004. In their own words: Athletic administrators, coaches and athletes at two universities discuss hazing policy initiatives. In J. Johnson and M. Holman, eds., Making the Team: Inside the World of Sport Initiations and Hazing. Toronto: Canadian Scholars Press.
Van Gennep, A. 1960. The Rites of Passage. Chicago: The University of Chicago Press.
Van Maanen, J. 1978. People processing: Strategies of organizational socialization. Organizational Dynamics 7(1):19–36.
Van Raalte, J., A. Cornelius, D. Linder, and B. Brewer. 2007. The relationship between hazing and team cohesion. Journal of Sport Behavior 30(4):491–507.
Waldron, J. J., and C.L. Kowalski. 2009. Crossing the Line: Rites of Passage. Chicago: The University of Chicago Press,
Winslow, D. 1999. Rites of passage and group bonding in the Canadian airborne. Armed Forces and Society 25(3):429–457.
Zacharda, C. 2009. How peer leadership impacts hazing in the arena of nonrevenue generating college athletics. Ed.D. dissertation, University of Southern California. The Humanities and Humanities and Social Sciences Collection.