This past week I decided to build a liquid cooled mining rig, with the entire frame custom built from supplies I bought at Home Depot. Turns out that making a case wasn't as easy as I thought, especially since I've never really built anything before. From the beginning I knew that a liquid cooled custom rig would be expensive, but the idea of lower temps was appealing... Oh and the fact that it would look pretty badass. 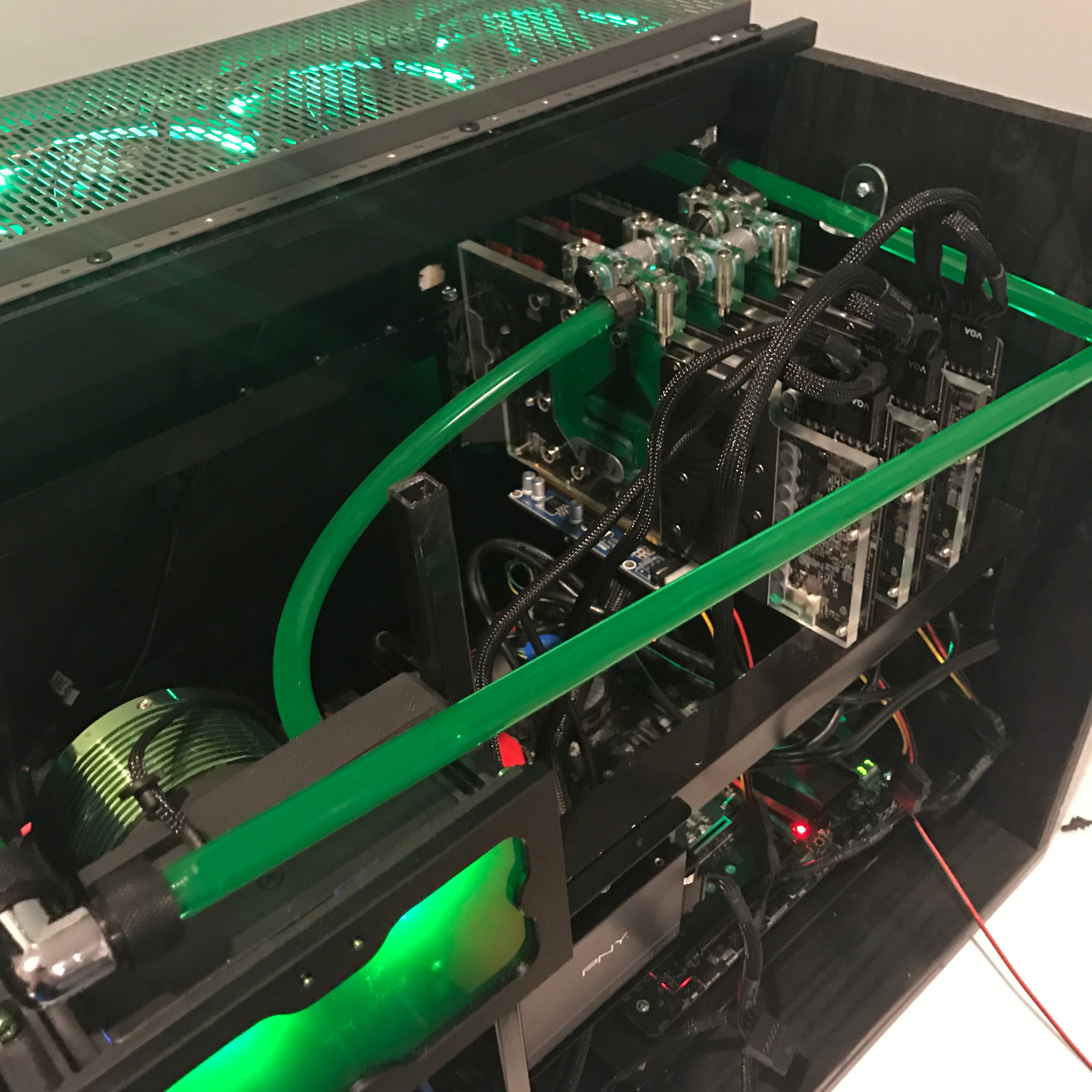 I decided to build the main frame out of wood, using steel and aluminum to create supports for PC components. I used a variety of cutting tools, but often found myself eyeballing it with my trusty jigsaw (not recommended). The way I went about building the case wasn't really the smartest. First I cut, painted and screwed the four wood sides together. I then cut two aluminum bars mounted them horizontally with L brackets to act as supports for the graphics cards. Then without disassembling the case, I made a few holes in the case for fans by drilling a small hole and cutting with my jigsaw. Finally I attached some metal supports at the corners and was ready to start adding parts.

I ordered most of the electronic components the week prior, while I was on vacation. It honestly felt like Christmas when I came when home. 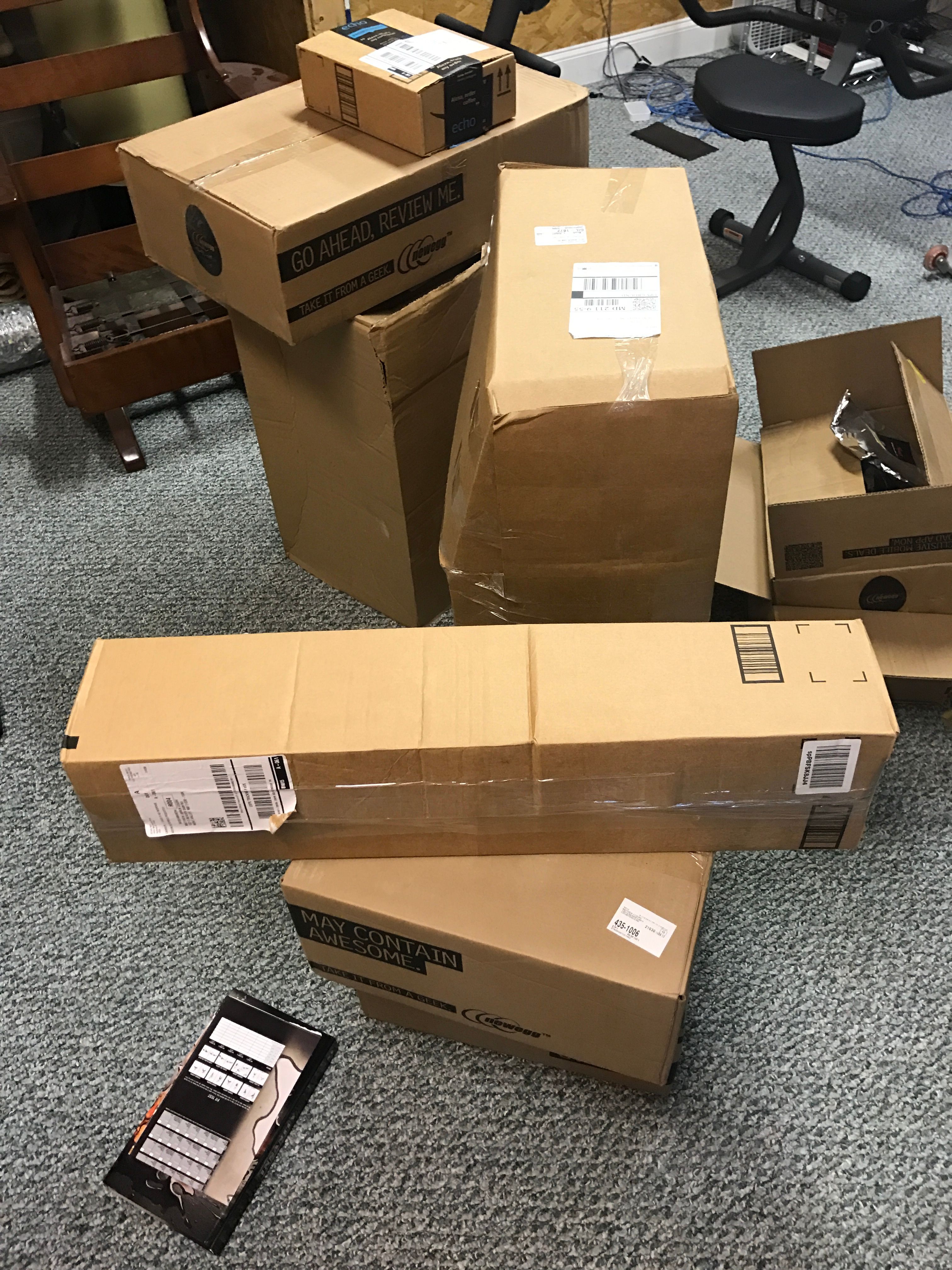 Putting It all Together

Never liquid cooled before but decided to have the water flow from the res to the cards to the rad and back to the res again. I decided to run the cards in series, mainly due to the lack of fittings. 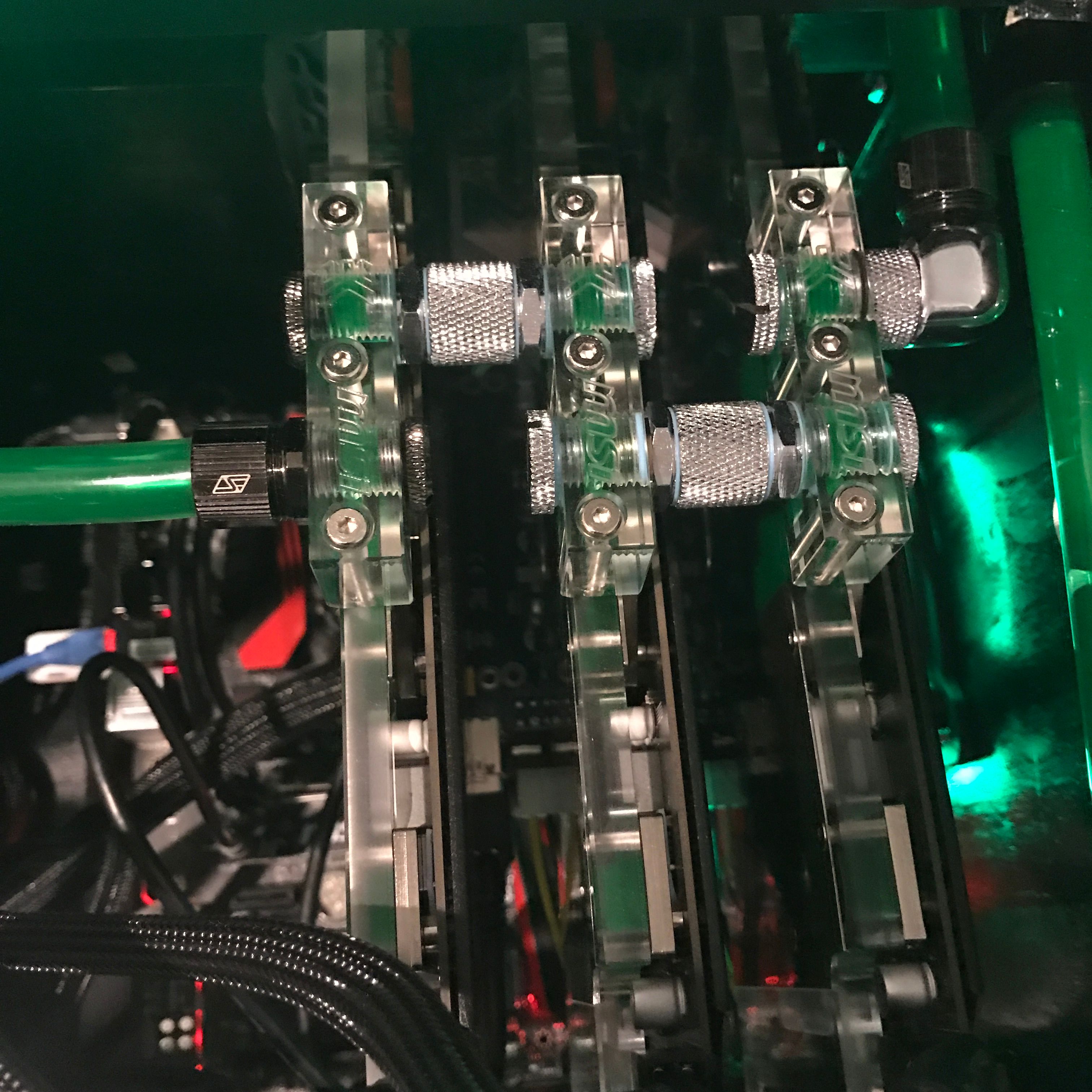 It took me awhile to get the hang of pipe bending with the heat gun, but finally managed to get a suitable bend for the front tubing. When I finally got all the tubing together, I proceeded to load the coolant with an old beer bong. Unfortunately I had a leak at one of the hard tube fittings but luckily I didn't have any other components nearby except for the pump. 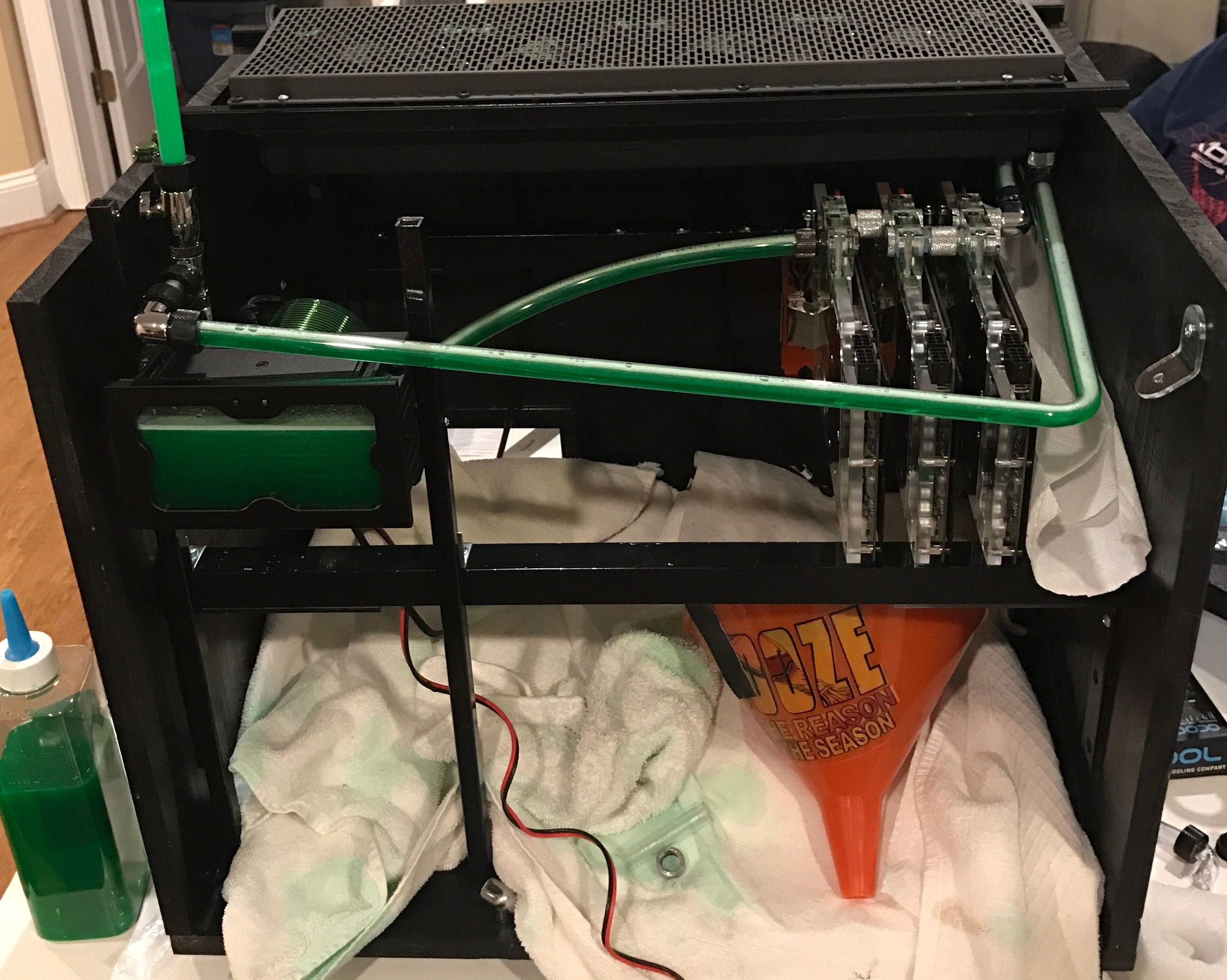 Got the cards up and running to test things. Temps are much cooler than on my other 7x 1070 rig, which runs at about 60-70c with OC. I mean to eventually add a 4th gpu to this loop and then run a separate loop for 3 more gpus and a cpu ( that's right, I'm gonna liquid cool my Pentium processor lol). It might be a tight squeeze with this case, so I may need to build a new one or make some modifications. The one advantage to liquid cooling, aside from aesthetics, is that you can cram loads of cards into a small space.

Was a lot of work but I'm somewhat satisfied with the results, let me know what you think!

Thanks, means a lot!

I had thought of that! Great, between better temperatures have the best efficiency cards 👍

Looks very good! I also built a simple mining rig and made a post about it. I'm looking forward to more updates

Awesome rig! I want to make one myself any advice?

Liquid cooled or with fans?

There's a lot of great posts around steemit or videos on YouTube that can help you get started. Really depends on your budget and power costs. Power runs about $ .13/kw for me and 1070s are very power efficient. Plus I can use them for gaming.

I really appreciate this post. I'm a big fan of enthusiast-style mining rigs (rather than straight up profit driven box/rack rigs).

How much did it cost you?
How long will it take to ROI?
What coins are you mining?
Nice looking rig, hope it stays cool in July.
Its 105 deg F here :(

The rig is very cool temp wise. Today, I actually was able to turn down the power to 50% tdp and still have it running stable with almost no change in hashtash despite dual mining. Temps are at 38c now and cut power draw immensely down to 440w.

Looks pretty neat. I want to make some of my rigs with watercooling too, but I'm waiting for cheaper watercooling systems for mining rigs.

Yeah it can get expensive. Only reason I did it is because you could get 1070s with liquid blocks for just about what normal ones were going for. Didn't really set a budget, just wanted to make something cool looking.

how these miner works

Very impressive! Thank you for posting

Wow! I hope to see more pics when its done. thanks for sharing.

Nice! but im frantic right now im TRYINg to oin the mining world and hoom up this avalon six i got with this Delta 2400w power supply! Why doesnt the rasberry pi show up with any HDMi sgnla? does the rasberry pi with the avalon six software not actually a full rasberry pi does itnot have HDMI!??! 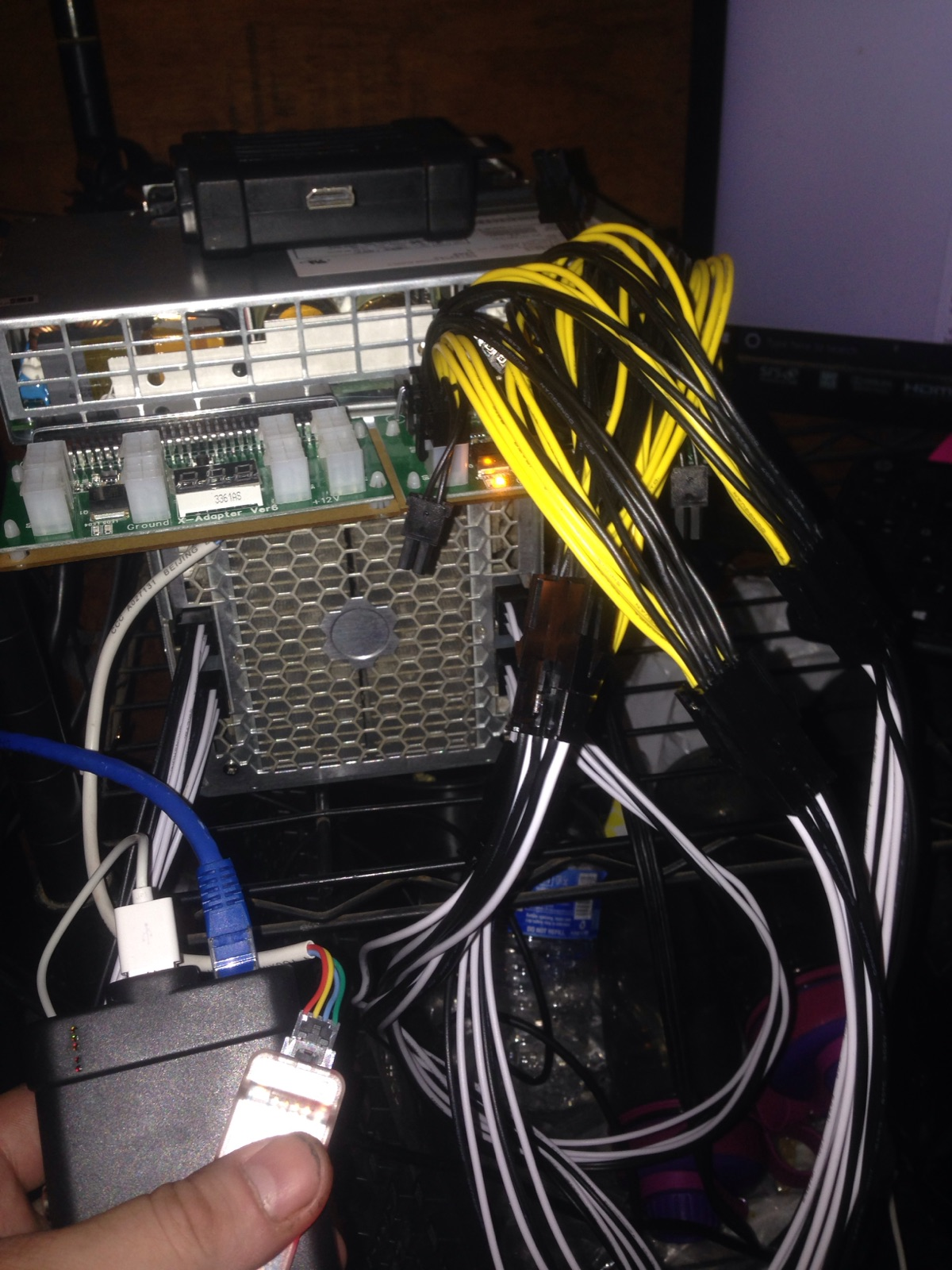 Why isnt the avalon turning on??? do i have it hooked up wrong???

this is so frustrating there are no videos explaiing how to hook this up with the delta power supply....nooneseems to have any real instructions on youtube, man mining is not user freinedy i thoughtt this avalon would be easy

the rasberry pi, how do i evven know what Ip adddress to access it???

do i need therasberry pi to turn on the avalon???

This is probably the coolest thing I've seen in a long time. Why do you choose to mine Pascal? Is it more cost effective or something? Do you have a background in computer science or are you self-taught?

Looks great but not really sure why you water cool a minning rig?

The cards were cheaper with a liquid block than with fans. I also plan on reusing the cards and cooling system for gaming at some point. I've got limited space and liquid cooling allows me to keep the system operating silently. Also seems to run a little more efficiently.

Very surprising that you got liquid ready cards for the same price!