MSP / ICZM / EIA - Out the Window in Bantry Bay

My name is Seán Lynch. I am the only person in Ireland to graduate with one MSc in Coastal & Marine Environments and another MSc in GIS & Remote Sensing. This is my first post on Steemit and I look forward to sharing more knowledge and information with this community soon :-)

The reason for this post is because a company in Ireland has been issued a licence to mechanically extract 1,860 acres of native kelp (seaweed) forest in Bantry Bay, west Co. Cork recently with no public or stakeholder consultation and no Environmental Impact Assessment. I wanted to publicise some knowledge about why we should encourage and engage in proactive research before decisions are made and licences are issued to harvest our natural and important ecological resources. As a researcher, I feel this decision is a slap in the face to the years of hard work put into proactive environmental research which is being entirely overlooked and many people in the community are visibly fearful for their generational livelihoods. I look forward to feedback and criticism. If you would like to support the local people, I have linked a website and petition at the end of the article. Please sign and share it :-)

The case for proactive research before Coastal & Marine Decision-Making (in West Cork, Ireland)

The oceans of our only habitable planet are essential ecosystems for the survival of life that provide a diverse suite of ecosystem services to humans including adding value to economic growth that represented a contribution of an estimated €1.4 billion to Irish GDP including employing 18,500 Full-time equivalents in 2014 (Marine Institute, 2015) and about €500 billion to the annual EU economy (European Commission, 2017). Ecosystem Services are the services that nature provides to humans for free, eg. fresh air, clean water, food, carbon sequestration, the list goes on.

“Blue growth” i.e. the sustained and inclusive development of coastal and marine territory is expected to undergo significant economic development in this generations lifetime and provide additional value to economic recovery, general well-being and livelihood. In order for this growth to be sustained for current and future generations, proactive research is needed to ensure that this is done in a responsible, sustainable, fair and balanced manner that is inclusive of the competing needs of multiple different stakeholders. Failing to address or engage with scientific investigation has resulted in dramatic and irreversible economic and ecosystem collapse. For example, in 1992, the collapse of the Canadian Cod fisheries (Fig. 1), once renowned as the world’s most productive fishing grounds, was devastated by incompetent mismanagement of overly-efficient and largely untested new technology that almost immediately put an estimated 40,000 people out of work resulting in a multi-billion dollar emergency relief package for coastal communities and a 2-year moratorium on fisheries that is still in place today, over 20 years later. This “ecoside” could possibly have been avoided, if management had engaged with and took the advice of academics and respected the natural stocks ability to respond to industrial harvesting and better understood the potential for “tropic cascade” (Fig. 2) caused by removing an integral and/or indirect component(s) of an ecosystem(s) Fig 1. “Canadian Fisheries Cod Collapse” – 40,000 people out of work in 1992. Fig 2. “Trophic Cascade” – in this schematic one can observe the impact that the removal of one component (Sea otter) had on multiple different and related parts of the ecological system in California.

In order for “Blue Growth” to be sustainable, fair and balanced, stakeholders must be able to share their concerns early to avoid potentially irreversible economic, ecological or livelihood collapse. Integrated Coastal Zone Management (ICZM) and Marine Spatial Planning (MSP) are inclusive decision-making processes for the coastal zone and marine space that attempt to deal with the multiple, diverse, overlapping and often competing needs and demands of multiple different stakeholders and local communities. While ICZM bridges the gap between terrestrial and marine planning, MSP is more exclusively concerned with maritime activities. However, both processes share common practices, such as involving different stakeholders in dialogue and finding ways to balance the distribution of human activities across space and time to achieve economic, social, ecological and environmental objectives. By drawing upon and/or generating the best available science, it is possible to geospatially, quantitatively, qualitatively, responsibly and fairly coordinate human uses and activities for sustainable long-term economic growth however this process must be inclusive and allow stakeholders to share their concerns early before licenses are issued. Failure to do so is entirely irresponsible and favouritist. Many activities are already managed in coastal and marine space such as transportation, aquaculture, fishing, bathing, renewable energy development, resource mining and coastal development and this process should remain ongoing, inclusive, open for debate and criticism and iterative.

Kelp, of which 1,860 acres has been licensed in Bantry Bay (Fig. 3) to industrially harvest with no Environmental Impact Assessment, no public and no stakeholder consultation has been described as some of the most ecologically dynamic and biologically diverse habitats on the planet with primary production among the highest in aquatic ecosystems and can be considered as “keystone species” which are important for the survival of many other different species (Birkett et al. 1998; NPWS, 2005). Not only does kelp provide important nursery and feeding grounds while anchored to the seafloor, but once naturally washed on shore they provide similarly important habitat for a variety of different migratory bird and various insect species. Undoubtedly, the removal of large swaths of kelp forest will result in direct and indirect ecosystem ramifications elsewhere and these interactions should be attempted to be modelled and understood before significant machine extraction can be licensed. Unfortunately, the biodiversity of Irish kelp and their significance for marine ecology is poorly documented and often overlooked and misunderstood. For example, although here in Ireland we are living on a relatively small peripheral island nation on a largely oceanic planet, marine ecology and marine science are not yet available as an integral part of the contemporary education system despite the ocean covering over 70% of the surface of our only habitable planet and providing every second breath of oxygen. However, this lack of data provides room for exciting areas of research and investment. Ireland (and West Cork in particular which enjoys some of Ireland’s cleanest coastal waters) could take advantage of these spectacular natural resources and pioneer ourselves as custodians of our only habitable planet and become a beacon for marine ecologists and sustainable tourism and provide the gold standard for sustainable educational tourism, scientific courses and educational summer camps for the long-term, which would be a sustainable source of income and responsible ecotourism for future generations to enjoy and learn from. 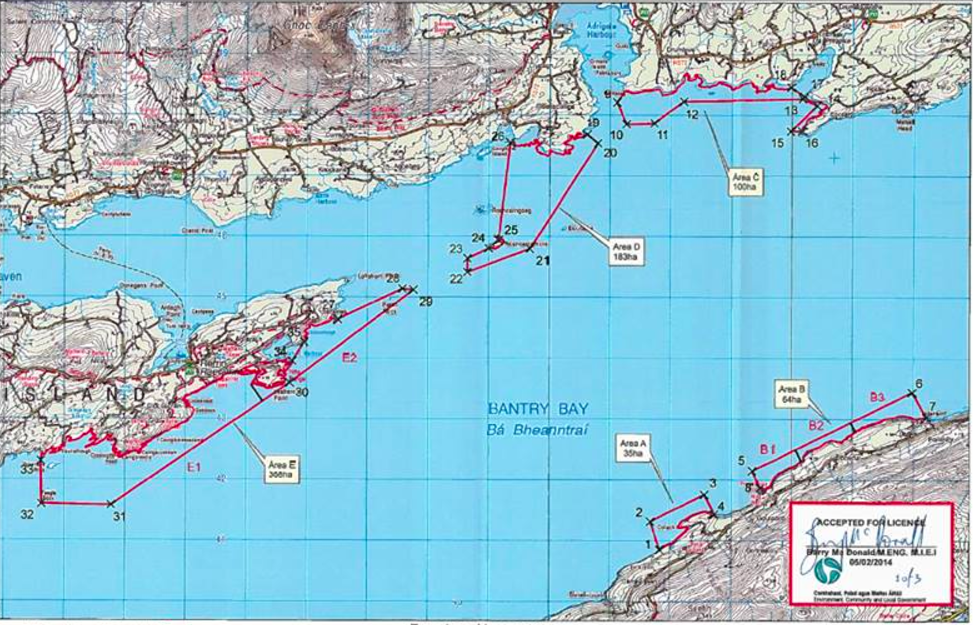 Through the Convention of Biological Diversity (CBD, 2010) Ireland, like all nations, is required to designate at least 10% of its coastal and marine territory “especially areas of particular importance for biodiversity and ecosystem services” as Marine Protected Area(s) (MPA) by 2020 however currently this figure is ~2% because of contemporary government ineptitude and a lack of basic geospatial data. Ireland is also legally required to implement the EU Marine Strategy Framework Directive (MSFD) that legally requires an “all-encompassing ecosystems-based approach to resource management” (EBRM) which by definition requires investigation into all of the components of an ecological system and should be representative of the ecological connections and inter-relationships of MPA’s and/or important marine areas. As well as native species, islands and coastal regions are the most threatened by invasive alien species that should also be factored into an EBRM (iDiv, 2017).

Climate change must also be factored into the equation, which is predicted to result in increased levels of water temperature, acidity and changes and rises in wave heights and storm surges to coastlines as well as changes in the timing and abundance of rainfall. In this respect, kelp offers the first hope of defence for coastal communities and significant critical infrastructure by taking the brunt impact of wave action and trapping sediment. Significantly greater research is need to understand how important kelp is for the local economy particularly in terms of how it can provide an ecosystem service as a coastal defence and mitigate wave action to prevent against coastal erosion which can cost between €0.7 and €6 million per kilometer for protection let alone insurance, repair and opportunity cost for coastal economies (Engineers Journal, 2017).

iDiv (German Center for Integrative Biodiversity Research, 2017); Islands and Coastal Regions and Threatened the most [By alien species]; https://www.idiv.de/news/news_single_view/news_article/islands-and.html https://www.nature.com/articles/s41559-017-0186

NPWS (2005); The Role of Kelp in the Marine Environment  https://www.npws.ie/sites/default/files/publications/pdf/IWM17.pdf

Hi, Great post and welcome to steemit! Just logged in and the funny thing is I am from South Africa and recently moved to Bantry little over a week ago. Great content I am now following! Cheerz

Hey! Wow that's great. South africa is a beautiful part of the world too I was lucky enough to visit there by ship recently on a marine research trip :-) Check out http://bantrybaykelpforest.com/ and feel welcome to support the local community on this one :-)