What Would Happen in the United States if the FDA Decided to Approve Marijuana?

medicalmarijuana (58)in #marijuana • 3 years ago (edited)

In August 2017, Democrat Senator Cory Booker, one of the most fervent political supporters of legal weed, introduced the Marijuana Justice Act. Booker pointed out that the punitive approach to marijuana used by the police and courts tended to impact the lives of low-income and minority people negatively. He also questioned the logic of having marijuana as a Schedule I drug alongside the likes of heroin.

Unfortunately, as long as the current administration occupies the White House, there is no chance of marijuana becoming legal on a federal level. According to Jeff Sessions, who is sadly our Attorney General, Mary Jane is a “very real danger.” He outlined his intention to punish weed users even in states where it is legal. Maybe when a more sensible administration comes into power, we can have a serious discussion about changing the laws. Legalizing marijuana federally would be an epoch-making decision; but how did we get here in the first place?

The Illegalization of Marijuana & The Quest to Overturn it

As most weed lovers know, cannabis was classified as a Schedule I drug under the Controlled Substances Act (CSA) 1970. The powers that be decided it had no medicinal use and also carried a high potential for abuse. The act was the culmination of decades of scare tactics which included media propaganda from the likes of William Randolph Hearst. There have been calls to remove it from its harsh classification ever since but the federal government has refused to budge. The reasons for their obstinance are manifold and include a devotion to Big Pharma along with plain, old-fashioned ignorance. Although the federal law makes weed illegal, numerous states have fought back, and at the time of writing, marijuana was legal recreationally in nine states plus D.C., and for medicinal use in 20 more states.
As other states look to make cannabis more accessible to their citizens, the pressure is mounting on the federal government to waive their ban. However, everything depends on the Food and Drug Administration (FDA). If marijuana is finally removed from Schedule I, it still has to be approved by the FDA.

What is the problem?

The FDA is in thrall to Big Pharma and quite content to allow deadly opioids to claim the lives of thousands of Americans each year. It is also happy to allow synthesized versions of marijuana to hit the markets. While real marijuana use for medicinal purposes is backed by thousands of research papers, the synthesized versions have nothing more than a handful of dubious studies yet this is apparently enough. 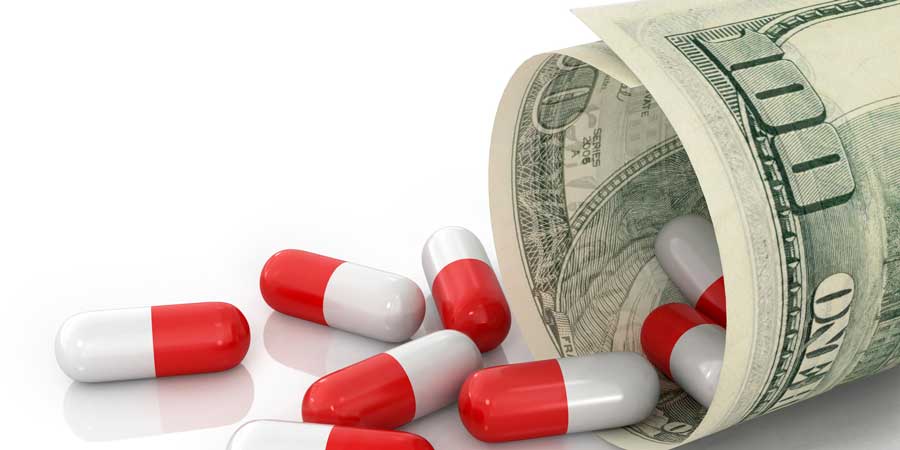 The FDA has not changed its stance on cannabis in almost half a century. It continues to cite studies which say weed is bad for you while ignoring practically every positive piece of research from the likes of Dr. Raphael Mechoulam. Even if the federal government saw the light and relaxed the ridiculous Schedule I classification, cannabis firms would have to pay hundreds of millions of dollars to gain FDA approval. If we overlook all of the above issues, plus the myriad of problems I haven’t covered, and the FDA was suddenly struck by a ray gun which forced it to adhere to common sense, and it legalized marijuana, the following are a likely set of outcomes.

When he introduced the Marijuana Justice Act, Cory Booker said that “our country’s drug laws are badly broken and need to be fixed.” He went on to outline the knock-on effects of the law in relation to marijuana which includes broken homes in low-income areas, increased crime, and fewer opportunities.

Although an increasing number of states have decriminalized weed, possession of a relatively small amount is still classified as a felony in some places. As you know, individuals convicted of felonies have a tough time finding suitable employment. Sadly, black Americans are 3.7 times more likely to be arrested for weed-related offenses. It is s a shameful slur on American society because whites and blacks use cannabis at roughly the same rate! There are certain counties in the United States where African-Americans are up to 15 times more likely to get arrested for a cannabis-related crime. Booker’s Act would provide federal funds to the 21 states where marijuana is illegal, as well as to areas where there is a disproportionate number of minorities, and low-income families, arrested and/or jailed for crimes related to marijuana. Fewer arrests also mean a reduction in prison overcrowding. One downside is that even if marijuana became legal, those already in jail because of a cannabis crime would have to serve their full sentences.

But cartel crime would not fall by much

It would be nice if the legalization of marijuana could hurt drug cartels but this is sadly not the case. Estimated losses are $1.3 billion per annum in Washington state and $1.4 billion in Colorado. Alas, these criminals would simply muscle in on the legal action. Marijuana laws have been relaxed in Mexico, but it has done little to reduce the hold the cartels have in the country.
Remember, these individuals are committed to a life of crime so they will continue as normal. They will attack legal sellers and produce even more weed which they can sell at a reasonable profit. While legal weed may see a reduction in crime, it wouldn’t lead to Utopia. After all, the cartels still have an array of illegal narcotics they can sell.

The actual cost of weed will vary from state to state even in the event of full legalization; it varies enormously within a state! For example, an ounce of high-quality pot costs an average of $120 in Berkeley, California but it is $300 an ounce in the state’s Newport Beach area. In areas where it is legal, the cost of marijuana depends on production costs and taxes. 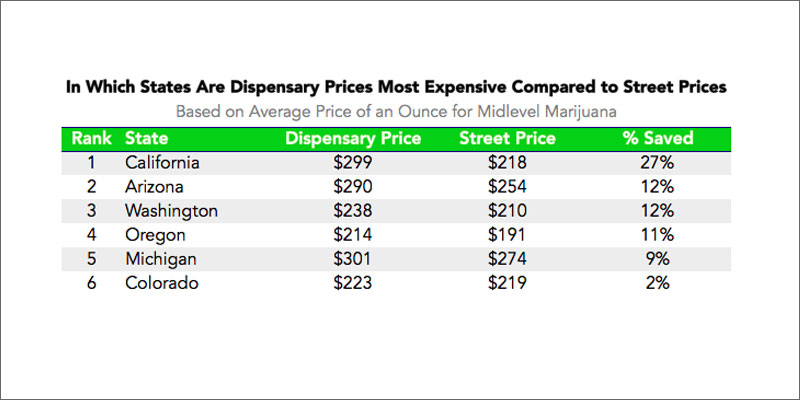 In theory, largescale production should cause the price to plummet. Data from Canada’s industrial hemp farms show the cost is as low as $0.20 a pound to produce. Of course, when you add in every conceivable production cost, the price rises to $20 for a pound of high ounce weed; that’s still pretty inexpensive! On the black market, the price is up to 10 times higher as sellers demand a reward for the risks they take.
However, taxation prevents the cost of cannabis becoming extremely affordable. The state of Colorado, which was the first to legalize marijuana for recreational use, earned over $200 million in taxes from the plant in 2016; a figure which almost tripled in two years. While medicinal marijuana in the state has a 2.9% sales tax, recreational weed users are hit with an additional special sales tax of 10%, an excise tax of 15%, and license & application fees. The state of Washington earned $256 million from pot tax in 2016 while Oregon earned $60 million in the same year.
The National Organization for the Reform of Marijuana Laws (NORML) believes excise tax should be $25-$50 per ounce; a similar level of taxation to cigarettes for example. Overall, we could expect marijuana prices to fall compared to black market levels; we’re just not sure by how much.

Marijuana’s legal status has made it difficult to perform detailed studies, in the United States and around the world. When Dr. Raphael Mechoulam studied it in Israel in 1964, he was technically breaking the law but got away with it, and changed the course of history. In America, clinical researchers can create the likes of LSD or MDMA in a lab with approval from the Drug Enforcement Agency (DEA) but are unable to do the same with marijuana.
In fact, you need a DEA license to perform any kind of clinical research with weed; and your study has to be approved by the FDA. When researchers want to get some research-grade weed, they have to go through the National Institute on Drug Abuse (NIDA), an organization dedicated to keeping weed illegal. The few clinical trials on weed that have taken place in America have shown encouraging results. The federally approved source of research cannabis is at the University of Mississippi, and this weed is a million miles away from the stuff you’ll get at your local dispensary. If cannabis were legalized, scientists would no longer have to jump through a million hoops and the number of studies, along with their quality, would unquestionably improve.

Final Thoughts on What Would Happen if the FDA Approved Marijuana

We can only hope that one day, the federal government and FDA realize that weed is not highly addictive, and it is also a natural way of treating a wide variety of medical conditions. Unfortunately, it is hard to see this situation ever coming to pass. The FDA does not want to anger Big Pharma and other industries that would suffer in the event of weed legalization. Along with the DEA, it is happy to prevent better research, lower crime rates, and improved health for American citizens in favor of the almighty dollar.

Unfortunately, the FDA is completely controlled by Big Pharma, and they will never allow the removal of Cannabis from Schedule 1 listing because it would majorly cut into their profits from cancer treatments etc.... EXCEPT..... or perhaps I should say, UNTIL Monsanto/Bayer begin their fully on attack in the Lobbying industry to get their GMO medically useless marijuana legalized. THEN.... then it will become legal, and in the US you will go down the same road that is about to happen in Canada and has happened in other countries: the legalization followed by the regulation of growers and the pushing of GMO marijuana in all dispensaries. That is EXACTLY what they tested out in Colorado. and they succeeded.

Following and have work in the medical marijuana world for nearly 20 years and have helped countless amounts of people!

I would definitely jump for joy at seeing the ability to start treating sick people.

There are Recreation shops now selling outdoor for $50 an ounce here in Portland Oregon. However indoor still is at about 300 an ounce in the stores for quality.

Very pleasant read! Although the way marijuana is being treated is not pleasant at all...

This post has received a 1.33 % upvote from @boomerang thanks to: @medicalmarijuana

This post has received a 1.29 % upvote from @booster thanks to: @medicalmarijuana.

Congratulations @medicalmarijuana! You have completed some achievement on Steemit and have been rewarded with new badge(s) :