A Response to a Dr. Jekyll and Mr. Hyde Prompt. 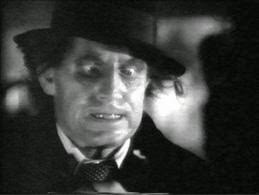 Explore the various (at least 3) YouTube trailers for Dr. Jekyll and Mr. Hyde. Then write at least a paragraph indicating which one corresponds best with how they are presented in Stevenson’s novella.You might consider what sort of film you would create if you were given that task. How much neuroscience information would you include?

Spencer Tracy in the 1941 film seems to be the most like the Hyde character in the book, but I liked the 2003 version starring John Hannah because Hyde appears as a doppelganger evil twin like William Wilson in Poe’s story. Similar to William Wilson who seems to say "In me didst thou exist—and in my death, see ... how utterly thou hast murdered thyself," Stevenson's Jekyll murders himself with the death of Hyde (Wikipedia).The Spencer Tracy Hyde displays characteristics such as physical ugliness, quickness and sometimes he seems smaller, and his sinister mannerisms are enough to capture the sense of Hyde within Stevenson’s novelette. He is a character that could be socially acceptable enough to have an apartment, be with ladies of ill-repute and communicate. In the 1932 version of Dr. Jekyll and Mr. Hyde, the transformed identity appears unapproachable and guilty of being too ugly to fulfill Stevenson's character's activities such as having an apartment and a bank account.

The 2003 Hyde is more characteristic of the psychological shadow side of a person that gets released from a compartmentalized psyche to gain control while the good Dr. Jekyll remains hidden. Although not being evil enough to transform the physicality of Dr. Jekyll, the 2003 Mr. Hyde blends into the social as a means to inflict more significant harm. The higher the repulsiveness, the less likely other people will interact with it. With the latest revelations about the Harvey Weinsteins and Dick Cheneys out there today it is easy to see how wealthy evil people are much worse than well-to-do dwarfish ugly people. Money like power, magic or scientific knowledge of drugs gives free reign to the greedy diabolical shadow side that is within each of us. That is why I think that the 2003 Hyde is more like what Stevenson intended despite what he wrote. And, this is interesting to me because it implies that a written message may carry the same message as a film and yet be very different. Nonetheless, the book and the various film adaptations show us how we still carry the animalistic need to survive within our brain circuitry.

In thinking about making a film, I would look back over my life to see where I might find circumstances that could have become hyperbolic had I not put the effort in to control my Mr. Hyde. Thinking about what type of neuro-circuitry might cause Mr. Hyde to surface, I am reminded of a celebration that I attended: “A Tribute to Joseph Campbell with Joseph Campbell” where Campbell was present at the Screen Directors Guild in 1987 several months before his death. We watched a film about George Lucas and how he developed the characters from the works of Campbell and Jung. Darth Vader and the dark side come from the shadow archetype in Jungian psychology. The Hyde side of one’s personality that usually remains hidden in public must be conquered by the hero in each of us and integrated into the psyche that we may use the power of the force but not be overcome by it; channel it to enable us to follow our bliss. If I were to make a film, I would start with research into whether or not neurological structures may exist for the myths/archetypes since they have spontaneously arisen among all peoples. If not, then I’d reframe the mythological evidence that currently suggests the validity of the archetypes because it ensures a broad audience.

For some interesting insights into Joseph Campbell’s ideas see his interview with Bill Moyers and my favorite clip of Joseph Campbell where he talks of teachers bringing students to life at http://billmoyers.com/content/ep-1-joseph-campbell-and-the-power-of-myth-the-hero%E2%80%99s-adventure-audio/ (Links to an external site.) For a thesis on Jung, Campbell, Myths, and Archetypes see “The Myth is With Us: Star Wars, Jung’s Archetypes, and the Journey of the Mythic Hero” by Jacqueline Botha https://scholar.sun.ac.za/bitstream/handle/10019.1/1816/bothaja_myth_2006.pdf?sequence=1 (Links to an external site.)