In this article will be described some predictions about Ethereum and Lisk, in particular the reasons because Lisk will pump

Ethereum was announced in the beginning of 2014, it is a Proof of Work coin, so mineable with GPUs, and was the first to implement Smart Contracts through the blockchain, allowing in this way developers to create DApps (Decentralized Apps), using its own programming language called Solidity.

Lisk is “younger” than Ethereum (announced in the 2016), and it is a DPoS coin (Delegate Proof of Stake), a different algorithm which might resolve some problems of PoS and PoW algorithms. Lisk, like Ethereum, lets developers create Smart Contracts through its own Blockchain, developing DApps; furthermore, Lisk has a special feature called SideChain (which improves significantly the security of the network), in simple terms, we can say that each Smart Contract developed with Lisk has its own Chain: in this way, in case of bugs that can compromise the entire Blockchain (As happened with Ethereum with the DAO), it’s possible to solve this issue without an hard fork! With Lisk, instead of using a new language such as Solidity, developers have the advantageous possibility of developing their DApps with a well-known language: Javascript, which has already a lot of experienced programmers.

Ethereum: an huge issue that the Ethereum team will address is the transition from the PoW phase to the PoS phase, which most likely will happen before the Q2 of 2018.

Lisk: this coin is at its embryonic phase, the team still has a lot of objectives to achieve in the next months, and soon will be released the new roadmap. Probably the most important of these goals, the completion of SDK, will be released by the end of 2017. According to the data provided by Coingecko.com, in the last weeks Lisk has grown up within its community (this growth is comparable to Ethereum’s one, besides both coins are sustained by a very good team and a constantly growing community): 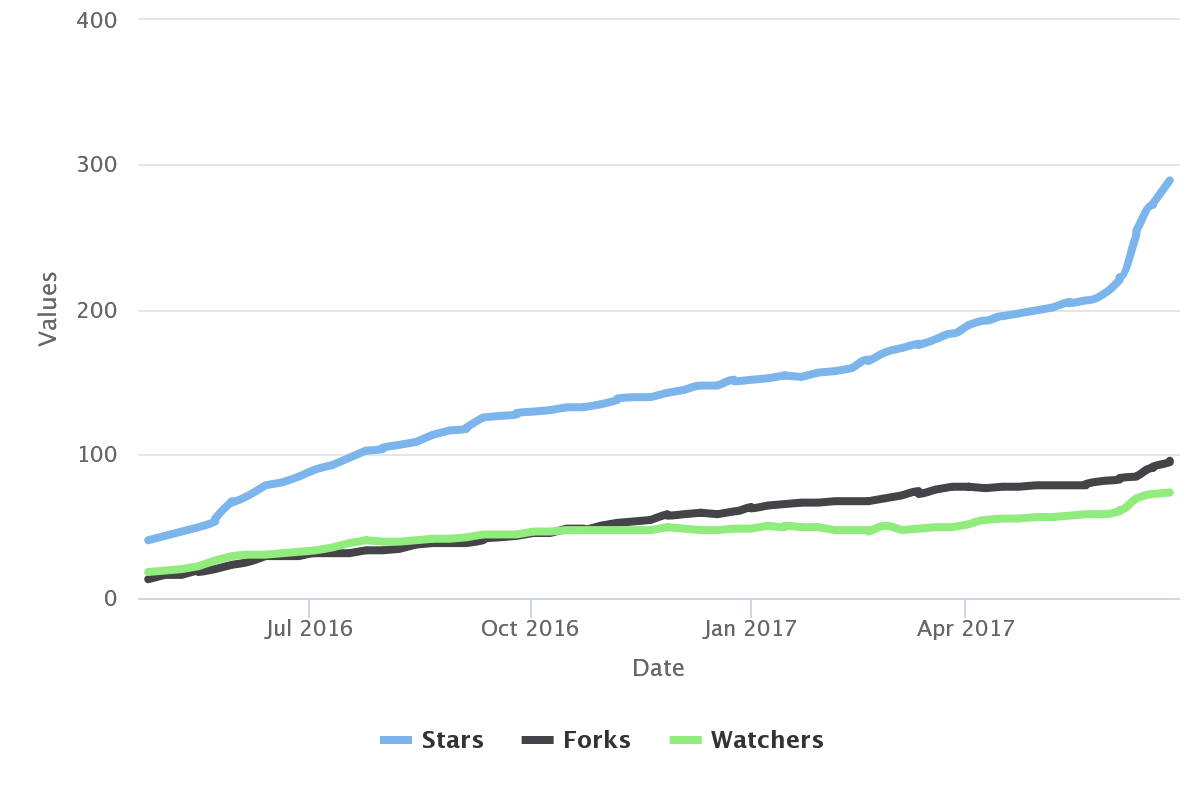 The trend’s changes all correspond to June 2017.

Therefore, at the moment we have Ethereum that is around to 300$ and 27$ billion of capitalization and the coins in circulation are about 93 million, whereas Lisk is close to 3$ and has a capitalization of 285$ million with 108 million of coin in circulation. Considering that Lisk is in an embryonic phase with a lot of scope for improvement and its development will bring significant improvements to Smart Contracts, such as Side chains, moreover programmers are already able to develop with Lisk’s SDK, due to the fact that is based on Javascript. Thus, it is easy to predict that Lisk will explode in the next few months at least to 30$ with the release of the SDK. Consequently, this enormous amount of developers might bring an increasing of new ICOs causing hype around Lisk and bringing a lot of capitals on this last (just as it is happening with Ethereum, but more!), probably also from Ethereum: these factors might cause a growth of 100x, reaching the actual capitalization of Ethereum! Regardless these observations, it is important to point that the growth of Lisk will also be supported by new investors in cryptocurrencies which will bring new capitals in this environment, including Lisk! In conclusion, this does not mean that Ethereum will be destroyed and Lisk will take its place, but it is really likely that Lisk will grow exponentially, taking away from Ethereum part of its capitalization, thanks to the innovative Sidechains and the great amount of developers that will bring more and more lymph to the Lisk environment. Ethereum is still a great investment but Lisk may make someone rich!

Good article. I've been following lisk closely and agree its got a lot of room to grow!

Congratulations @cryptonews-ita! You have completed some achievement on Steemit and have been rewarded with new badge(s) :

The key for Lisk is to move to the next level is to deliver at least one killer app. Ethereum already has it in form ICOs. The other key is Lisk needs to deliver is getting developer community backing the platform. If they can get traction in these 2 areas, They can make many people rich.