Autism is the Unnoticed Hero in Season 3 of Netflix's The Unbreakable Kimmy Schmidt [SPOILERS!] … and no one is talking about it.

That is, except for a couple of forum posts of people complaining that he is too stereotypical.
Frankly, I think these people are reaching to be offended, but that's not why I'm here today.
Being the mother of a highly intelligent Autistic 3 year old, I am often careful not to try to seem like I think I am an authority on the subject, but as I watched season three play out, I became excited to talk to someone about this new character. How disappointing that almost no one has given him much more than a first glance and wrote him off as another quirky character in a quirky fictional universe!
As far as I know, no one on Tina Fey's crew has said this character is Autistic, but for those of us in the know...well...we know.

His name is Zach, and he doesn't appear until the next to last episode. When we first see him, he is seated in the front row of Kimmy's Philosophy class (which is probably a bit of a joke in its own right), asking the professor to please identify the specific kind of trolley used in the hypothetical scenario the professor has presented to the class. When, he says that it doesn't matter, our guy quickly declares a specification to satisfy his need to have that piece of information. This is our first hint that he is a bit quirky, but it's an easy moment to write off as the rest of the episode moves along.

The audience doesn't see him again until the next episode when Kimmy is sitting in the hallway, her hair frizzled, her lab goggles hanging around her neck, and some kind of chemical residue on her face. Her last class obviously didn't go too well, and she's talking herself out of panic mode, fearing she may be failing college. When Zack walks out of the dean's office, Kimmy senses his tension and asks if he is okay. To which he responds by identifying her and stating a couple of random facts about her, and she seems a little put off by his bluntness:

All stills from the show are screenshots from Netflix. 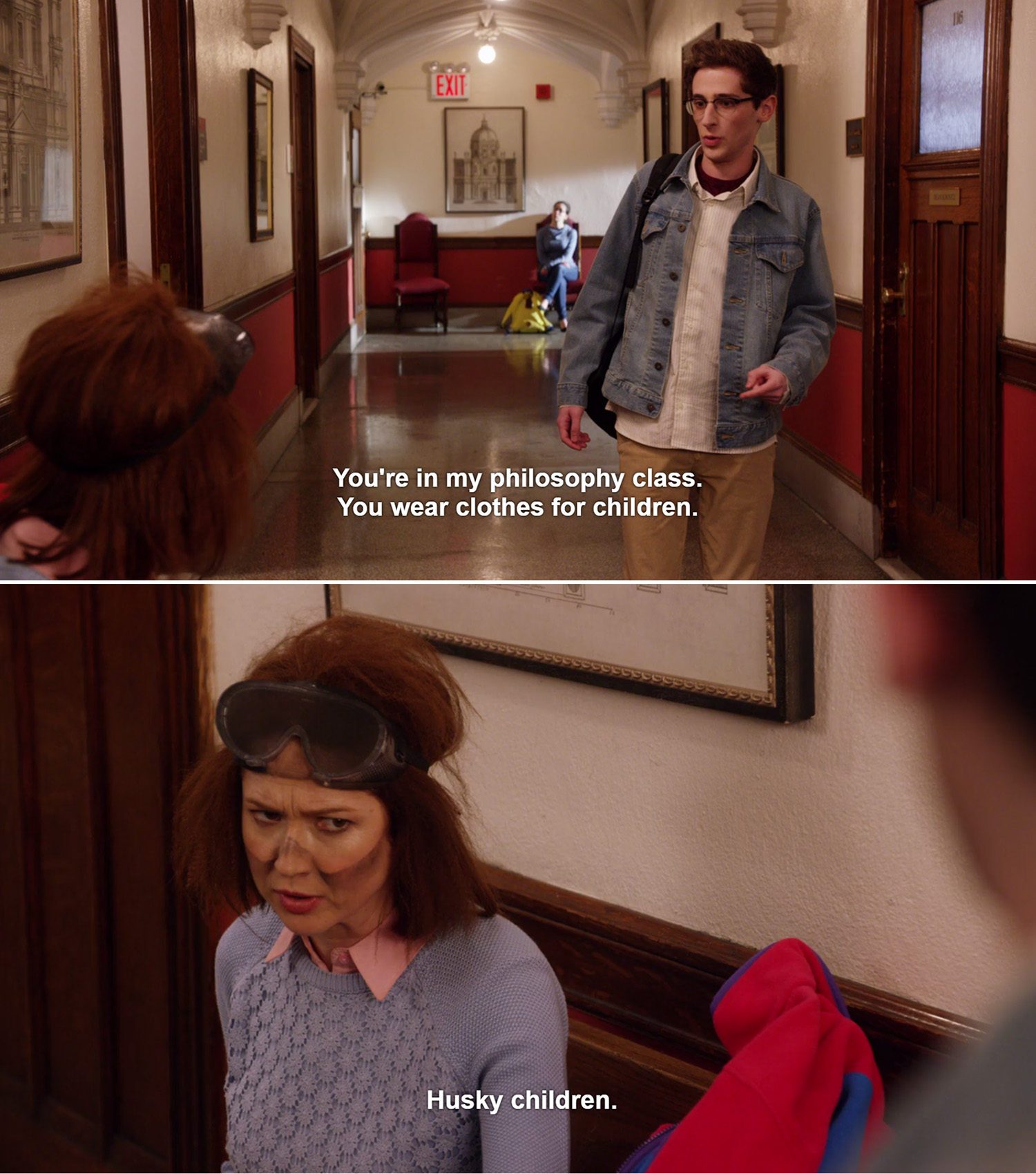 Kimmy assumes he has failed out of college (like she is about to do), and gives him a pep talk in good ol' Kimmy fashion. In the process, she peps herself up, too, and they end the conversation with a declaration that they are in control of their lives and a friendly high five.
Zack awkwardly blurts out, "Paw Patrol to the rescue!!" as he returns the high five, then explains, "That's a cartoon I quote to soothe myself,” and then runs off.

This is called Echolalia, a term used to describe when a child repeats something he/she has heard. Echolalia is a normal part of speech development, but with neurotypical children, it is a short stage of speech development (usually known to parents as that time when you have to watch your language because your little one is trying out every sentence you say). With children on the Autism spectrum, the echolalia stage may stick around longer, sometimes forever. Many older children (ages 8-12) will use quotes from movies , books, or music to speak to the people around them. For example, I have a friend from high school, we will call her Kay, whose son speaks mostly in echolalia. Kay says her son will sometimes wait to speak in a group conversation until he can find a way to relate the topic to one of his favorite shows, and will quote it word for word. She says her family will work hard to take the time to make the connection and understand him, and she has described how his eyes light up when he knows they understand what he's trying to say. A perfect example of how Autistic people need their loved ones to come to their level to make a connection, not expect them to come to ours.

After Kimmy's dream of becoming a crossing guard is cut down, she confides in Lillian, who decides to take matters into her own hands. She storms to the dean's office with a hammer to confront him because Lillian is the motherly kind of slum lord we are all happy to have never had. There she runs into our Autistic friend, Zach. Zach says he is waiting outside the dean's office for Kimmy because that's the last place he saw her so she MUST be there. He says he needs her, and Lillian sees an opportunity to give Kimmy what she needs - to help others. Together, they go to find Kimmy. 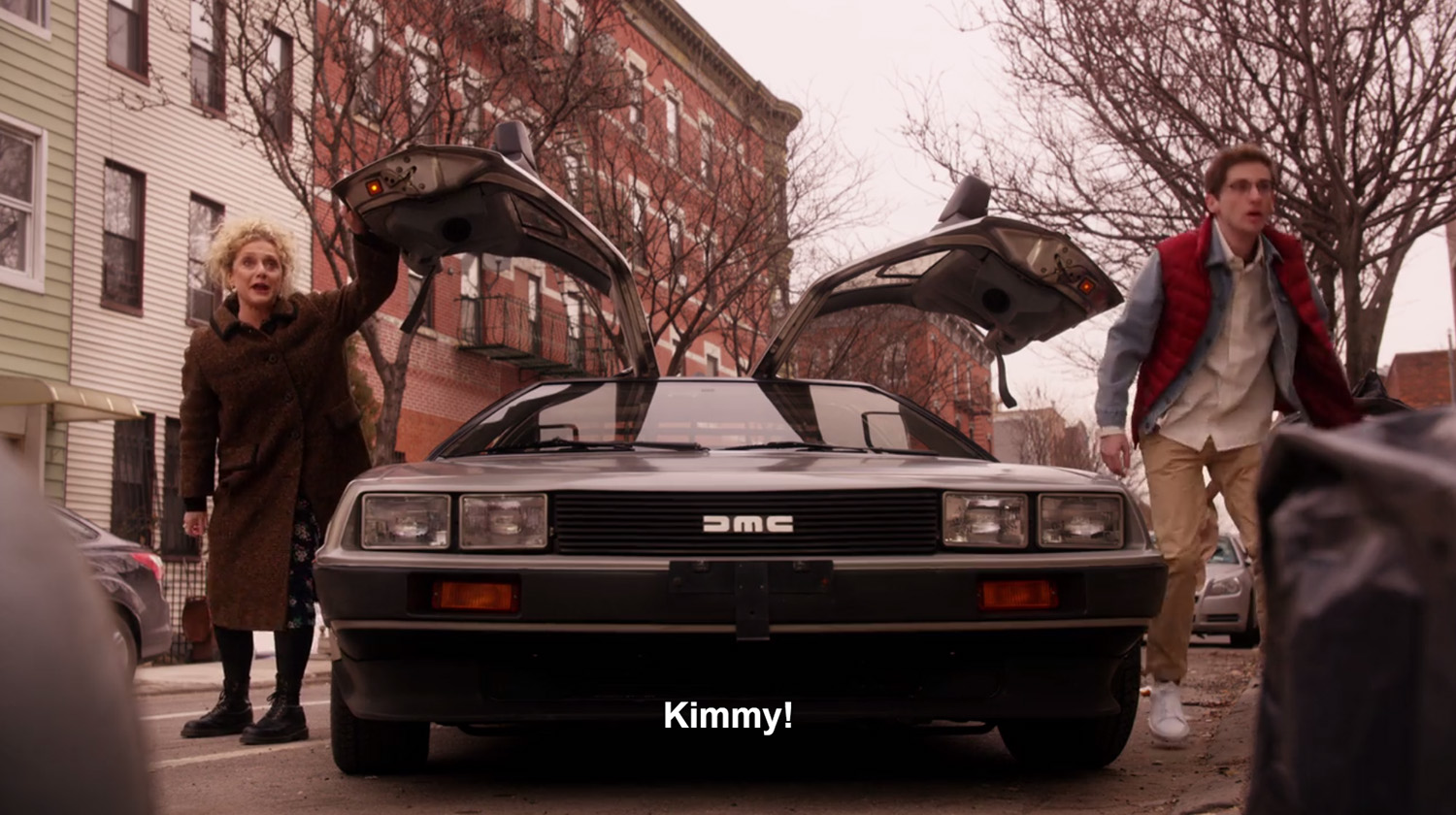 The Back to the future outfit and matching Delorean are another tell-tale sign of Zach's Autism. He may often find comfort in the familiarity and the confidence that comes with the disguise. Some may even wear the same outfit every day because wearing clothes at all is painful or uncomfortable. For some it's the familiarity of routine.

When he see's their building, he stops in his tracks: To the casual observer, this seems like nothing more than a callback to an earlier joke about the building Kimmy & Co. call home. (Turns out, it was never a building, but a repurposed tugboat, thus probably not up to city building codes. RUN, LILIAN!!!) However, this is also a representation of how many people with Autism see the world a bit more differently - a bit more literally, you might say - than the rest of us.

One night, my son came up to me with a toy and he kept saying, "Boat! Boat!" I looked at the toy he was holding up to me, and it was not a boat, but this blue kazoo that is shaped like lips. He must have first seen it upside down and stuck to the idea that it was indeed a boat and there was just no convincing him otherwise.

Here's where the writers get specific at hinting - but never outright saying- that Zach has Autism. He explains that he wants to hire Kimmy for her Emotional Intelligence. More specifically, he explains that he has just hired several new employees and he doesn't want to talk to them - ever. He also introduces her to his work environment - a sensory friendly office! It seems that Zach is the kind of person who works best when he is able to stimulate his senses with bright colors and an exciting, creative atmosphere. The commercial space is complete with, old school arcade games, a ball pit, and lovable dogs to pet to relieve the stress of an overwhelming workday.

People with emotional intelligence are often referred to as having compassion and empathy for others. They are highly aware of their own emotions and can regulate them on their own. They often think before they react to a situation. We've seen Kimmy do this a number of times in season 1 &2 to talk herself down before moving on to figuring out a way to solve her problem. We have also seen her manage the emotions of others when necessary. Remember Cyndee's terrible case of Hulkmania in the bunker?

Because he struggles with the social/emotional area of the spectrum, Zach not only needs someone to translate the emotions of others in a way he can understand and use to his professional advantage, but there may also come a time when he needs her to help him handle his own emotions. Her usefulness in this area is unlimited, and could range anywhere from calling Zach out when he has hurt someone's feelings and needs to apologize to identifying when he is becoming overwhelmed by his environment and heading into emotional meltdown territory. 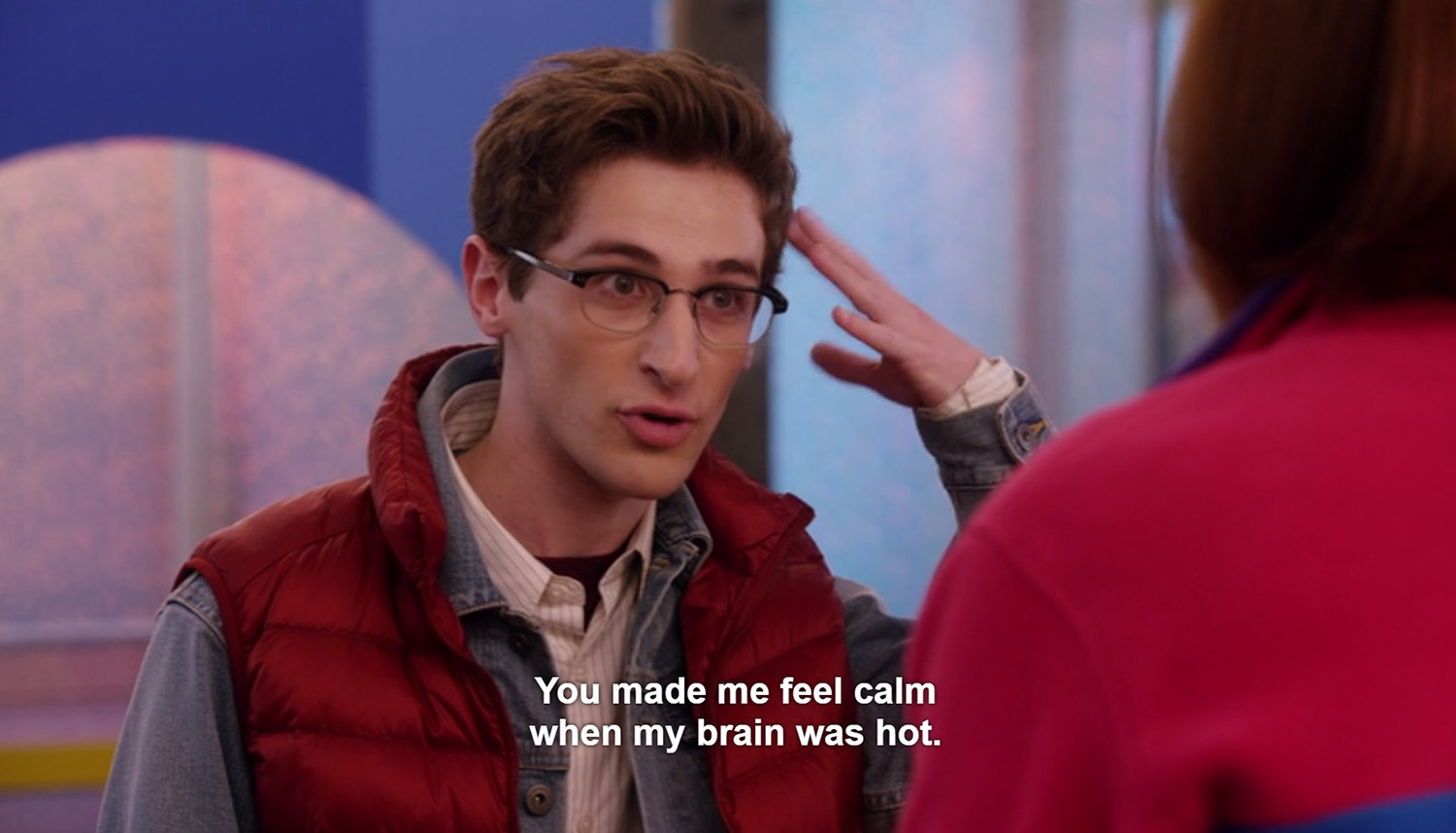 Empathy is a struggle for some with ASD, including my own child. Though my son is good-natured and has never deliberately tried to hurt anyone, he also doesn't understand why the dog yelps when he accidently steps on her tail. There's no concern for Mommy on the rare occasions he has seen me cry. Then, it's revealed that Zach carries a laminated card of faces portraying varying ranges of emotion in his pocket, and uses it to convey an emotion to Kimmy that he says he understands (although he doesn't mention actually feeling that emotion at that time). These cards are a REAL tool used within the Autism community to help teach emotional and social awareness. Ultimately, Zach ends up becoming the most important character in season 3's story arch because he provides a solution to the biggest problem Kimmy has been working on since she escaped the bunker - figuring out where she fits into this world that she has trouble processing. His job offer provides hope for a girl whose womanhood was delayed, but also plays to the strengths she has developed as a result of that delay.

My hope is that Tina Fey and her fellow writers continue to explore this light-hearted look at an adult with Autism who is finding ways to successfully function in the adult world. I hope that season 4 shows Kimmy relating to this man in ways that only a person who has lived her kind of life can relate to him. 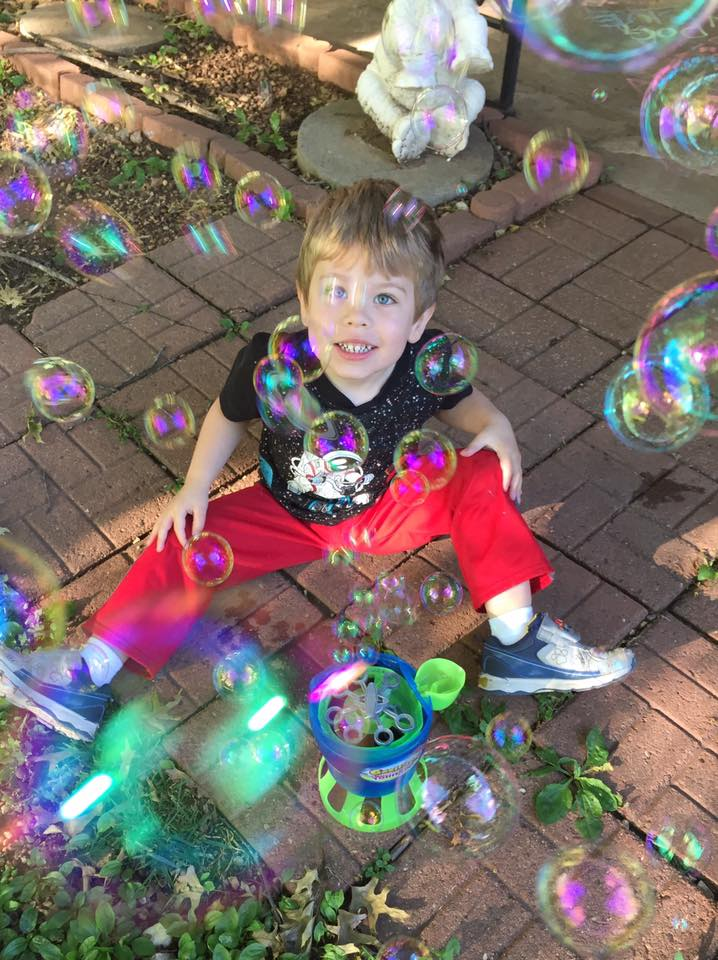 Ben Affect's The Accountant gave me a different perspective on AUSTISM