When the global financial system took a nosedive in 2008, I was coming of legal age & was interested in investing in the stock market. And there was Netflix

But as a young kid risking all my money I wanted to be sure.

I searched on cnbc.com and other financial news networks to determine if I was going to be right and if the stock's future was as rosy as it seemed to me... NOPE!

Quite the contrary! All I could find was FUD!

Netflix stock sinks 35% as subscribers flee
Is Netflix the next AOL?
Netflix Blunder Could Cost It 30% of Subscribers
https://www.marketwatch.com/story/thinking-of-buying-netflix-press-pause-2012-12-04
https://www.fool.com/investing/general/2011/04/29/5-threats-that-could-kill-netflix.aspx
http://deadline.com/2012/07/netflix-stock-down-306838/
https://seekingalpha.com/article/242320-whitney-tilson-why-were-short-netflix

I could just go on, the news was really pessimistic, essentially Losing Subscribers & Content Partners and there is no way they can recover from it... and yeah the FUD on a sure thing like Netflix was really this bad.

(If you ever want to go back in time with google. Use the search tools to define a custom range, I Know Rite?)

But I got scared. If I was wrong, I could not handle the fear that others knew the truth and I didn't.

The FUD tricked me. And I didn't do it. Instead I invested in some other stupid thing which I didn't believe in but I did it because I did not trust myself. I did not use my own brain to do my own critical analysis to determine what is real and what is not!

The reason this story is relevant is because we are in that moment with currencies I believe.

Through my experience I see now that Investing & Trading are games one plays against him/herself. You can trick yourself into believing anything, but finding truth is a difficult task.

The truth I found was to stay true to myself. What do I believe in? What will make the world a better place to live? There is where I am going to invest.

This is why now I do not fear any market capitulation, I know that the items I believe in will be worth its value when it's time comes. Yesterday was a very red day, across all asset classes: Cryptocurrencies, Stock Markets, future markets etc. In times like those I try to identify what do I believe in which is being dragged along with everything else, and take it at a cheaper price.

Here is a fun little thing I made with Paint. (this is not a legit Demand Supply chart but it still resembles the point well enough) 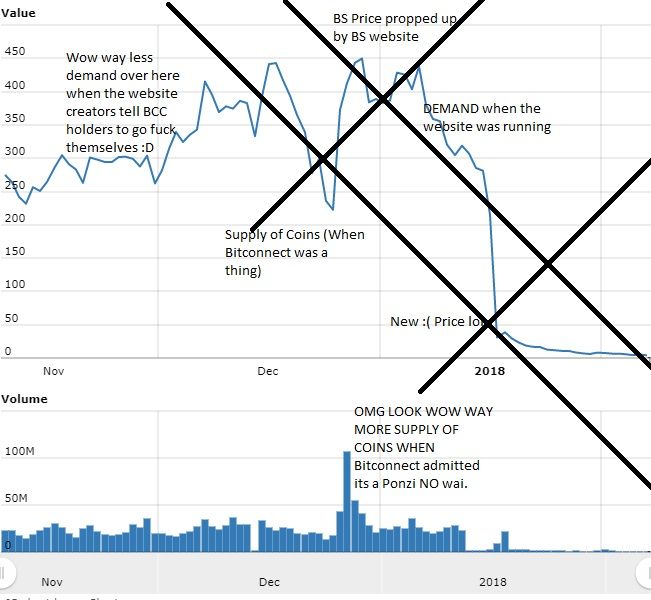 Now Bitconnect is a bad example because it was a BS Ponzi,

but at the end of the day thats why it's the greatest example ever!

In legitimate markets, many factors determine price, such as short term reduction of demand

Or changes in supply,

I mean honestly this chart is all the evidence anyone needs for Bitcoin 100,000k. Note: (This is why I am VERY skeptical and bearish on Ripple, I believe any asset worth investing in needs to have value & scarcity!, be very wary of high supply coins!)

I hope you learn as much or more from my story as I did!