📌The King's men that we support - Government servants ... (Original travel photographs and thoughts)

Are they really worth it? "They could not put Humpty-Dumpty together again - all the King's horses and King's men..."

If we equate today's fragile economy, delicate state of peace, even more flimsy state of health issues etc. in the world, I can not help thinking of the proverbial Humpty-Dumpty. The world is like an egg, sitting on a wall and tottering around - about to take a great fall! 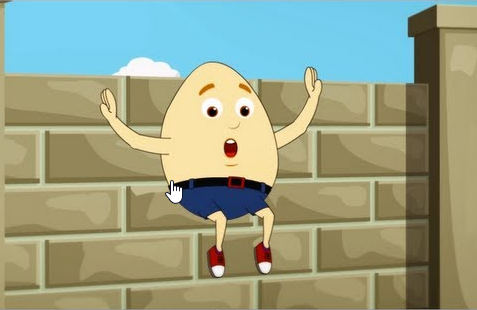 Not a single day passes by when I open the newspaper (or my e-paper) and let out a long sighhhhh. Issue after issue jumps out and cries out the worsening state of our world.

Where are all the King's men then - those who are PAID by us, through our taxes, to put Humpty-Dumpty back together again. Why are they not out there trying to prevent Humpty-Dumpty from taking a fall, in the first place.

As I watched this cute parade of city guards in Helsingborg in Sweden, I wondered about the expense on 'Governance' in general. I took this picture with my Nikon P900 camera: I am not really an 'anti-government' kind of person. I believe that, while it is debatable how 'control' is exercised in a country, whether 'centralized' or 'de-centralized', some form of conscious governance is required. However, I do not really think that the behemoths of 'governance' systems created by us over decades, have evolved in the correct way.

Why do I think government spending on employees is too high?

It is common for many successful businesses to have their administrative overheads (including salaries of the administrative, management and support function staff) to be in the range of 2%-6% of cost of product/works in most of the private businesses that I have observed.

People who 'manage' tax-payer's money for public works (like education, drainage, roads, other infrastructure etc.) can be equated to the 'administrative overheads' of a private enterprise. Therefore, I would have liked to see the overheads to be in the similar range.

Given the complexity of scale, as compared to running a private company, I am even willing to make a 100% margin for deviation and state that the cost of such overheads can be tolerable up to double of a private company's overheads i.e. up to 12%.

Let us take a look at what the data across countries in the world shows: 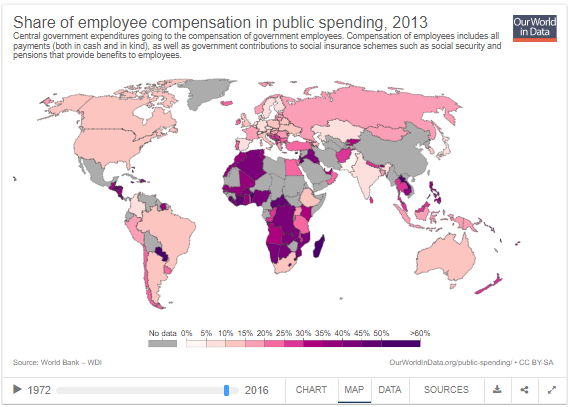 The situation is horrible in a lot of developing nations. Especially, in Africa and SE Asia, the expenditure for government manpower forms over 50% of the government spend for public works!!!

No private business would survive under these kinds of overheads.

I, therefore, believe that all the King's men are perhaps not needed and are causing Humpty-Dumpty's fall rather than saving Humpty-Dumpty. The government services in many countries could be grossly over-staffed.

Governments services may be driving our coffers empty - Doing nothing to save poor Humpty-Dumpty!

Steemians, please comment freely to share your experiences, knowledge and views about Government services and their staffing. Thanks.

resteem your post
Its good information. I agree with your idea in this way we can earn more.
Thanks for sharing the the post that would help the steemit community.I like your posts so much that I always wait for your post and with your post attention Podium
I thank you very much
I appreciate your support and am grateful to be here on Steemit.
I welcome any feedback you have to offer as well as an upvote!

True it would b less expensive to prevent humpty from falling the wall than putting it back.
Lets hope for the best that our tax money will b put on better purposes

Great info... I fall into depression when start thinking about Croatia government spending...

Government money could do a lot to fix poverty if the money was given out to all individual residents through a universal guaranteed basic income, and funded exclusively by Land Value Taxes and Pigouvian taxes internalizing negative externalities like pollution rather than any sort of tax on genuine property produced by human labor.
It obviously will not work if you tax the provision of useful goods in order to provide targeted subsidies which provide perverse incentives

You mention UBI in America and people lose their minds.

I think citizens should think like you, being aware,responsive and participate to what government is doing whether supportive or being a critic, I think that really contributes for better outcomes. Keep it up.

This post gives have enough information for us. Great work. Well done!

A friend of mine worked for the government until he realized that government is simply organized crime the same as any "gangster organized crime" I pay close attention to Venezuela as they were once an affluent country...now the corruption within their government is screaming. The rate that all countries are printing fiat with no way to pay it back is brutal. I appreciate your Humpty Dumpty analogy as you are exactly right and I am very glad I am invested into cryptocurrencies.

Hi vm.. This is a big issue everywhere.. Useless Expenses of governments specially in our country are a big issue.. People raise their voices against this but are neglected.. Other than protocol officerz and guards huge amount is wasting on different houses luxuries like president house, pm house etc.. Even electricity bills of these are more than millions..
People are suffring lack of necessities of life and average income is in hundreds but necessary expenses are in thousands.. Thanx for enlighyen an important issue again