Always Curtail your speech, for your tongue might put you to your downfall. 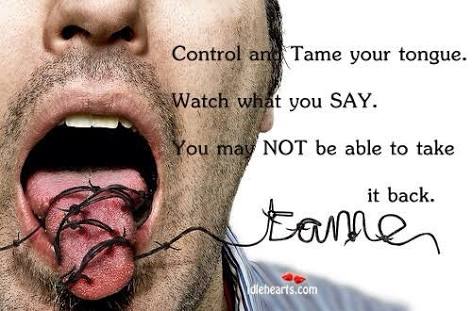 A tongue is that flexible muscular organ in the mouth that is used to move food around , for tasting and that is moved into various positions to modify the flow of air from the lungs in order to produce different sounds in speech .
The tongue is an important organ in the mouth that helps us to talk fluently . The tongue is really very important . when it is used rightly it yields great results. Many people have said a lot in the past, that they wish to take back but, they can't and it is affecting them now. Some people have lost great opportunities just because of what they said in the past. Someone asked you for help and you talk rudely to the person yet, you won't help the person out. That person might be great in the future and you will need help from the person but, because of the way you spoke harshly to the person,the person may or may not help you. And you keep remembering that it was because of what you said in the past that made you lose that great opportunity that could have bettered your life. Assuming you've spoken nicely to the person it wouldn't had been like this.

Some people think they only commit murder by killing the person with a gun or a knife. But,that's a big lie many have killed people with just what they told them. It may interest you to know that when you say things that hurt someone so badly, you have indirectly killed that person. Some people just because of what someone told them they go and commit suicide and the person thinks he had done nothing it's a very big lie. You indirectly killed that person.

Some children say things to their parents that make them live in regrets all their life and in some cases they die out of high blood pressure and their children assume they died a natural death not knowing they are the ones that killed them.
We all should learn to control our tongue because, what we say can make or break us. Just like when you gossip with one's name, you're not even sure of what you heard yet you go about spreading rumours you never went to confront thee person in order to know the truth and just because of what you said you have ruined the person's image and you have indirectly killed that person and the person now lives in agony and pains. We shouldn't be in such a haste to talk we should sit down and think before we utter a word because what we call nothing today might be something tomorrow. we should talk less and listen more.
Some people had great plans of becoming great but,never became great just because of their tongue. They have freely told Every one their plans and it got to the wrong ears and those people made sure they never achieved their goals.
In conclusion, we all should learn not to be in such a haste to talk but talk when it is necessary. Because what we say today might make or break us in the future.