Life Without God Is Empty 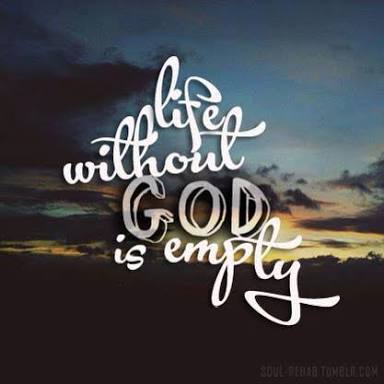 One morning, I went with my little 7-year old brother to fetch water into some jerry cans. And as we were offloading the cans from the boot of the car, he effortlessly carried two kegs to the tap. As he did that, something struck me as to how he was able to carry the kegs. Anyway, I filled all the jerry cans and it was time to reload the boot. I then told my little brother to try lifting one of kegs and guess what, he shouldn’t shake it not to talk of lifting it. After a while, he gave up on what seemed like an impossible task. When he gave up, I carried the kegs in twos into the boot almost as effortlessly as he had done earlier when the kegs were empty. That day, I learnt two important lessons about life which I would like to share.

First, the question that crossed my mind was how was my brother able to carry the kegs? Was he that strong, I mean, a 7-year old boy? No. He wasn’t able to carry the kegs because he was strong, he was able to carry them because they were empty. The lesson there is this: In life, many of us suffer various forms of defeat from the enemy not because he is so strong but because we are empty. We do not fill ourselves with what is needed (God) to withstand the devil. Remember that my brother wasn’t able to repeat the same feat when the kegs were full. The only thing that can give you enough stamina against the devil when he tries to lift you is being filled with God. Get more of Him and trying to make you fall becomes mission impossible for the devil.

Second is this, although my brother wasn’t able to lift a filled keg, I was able to carry two at a time. The difference was our capacity. I had enough strength to carry the full kegs while he didn’t. Some things in life wil remain as challenges or mountains for you until you develop enough capacity to handle them. Once you have that capacity, what seems impossible becomes possible and you are able to get the desired results. Stop complaining about those challenges that seem so difficult. Instead increase your capacity, work on yourself, make yourself better and stronger. Before long, what looks like a mountain will be more or less like a road bump.

Get more of God and be a better version of yourself. In so doing, your victory is certain.
Have a nice day.
Happy Sunday.
@temmyguru