Confucian Family Ceremony for The Ancestor in My family, Korea

December 19 was 3rd years aniversary since my dadd had passed away. I can’t believe that my dad does not exist in this world. I still remember his voice, his face and his silly humor…

In Korean family, a special ceremony for the ancestors has been undergoing in the House of Confucian tradition family.
I think Korea is the only country where the Confucian ceremony has been served until now which has been originated from several thousand ago

In Catholic family, also this kinds of ceremony is undergoing under the circumstance of any spiritual signal removed.

In Protestant family, this ceremony had been banned from it’s beginning.

My mom is Catholic. This ceremony is very important to her, because she had grown up in Confucian family. Even though she believe in God, the ceremony for ancestors is the most important thing to her.

She is still believing through this ceremony, our ancestors are taking care of us in the Heaven.

She prepared foods by herself for the ceremony. 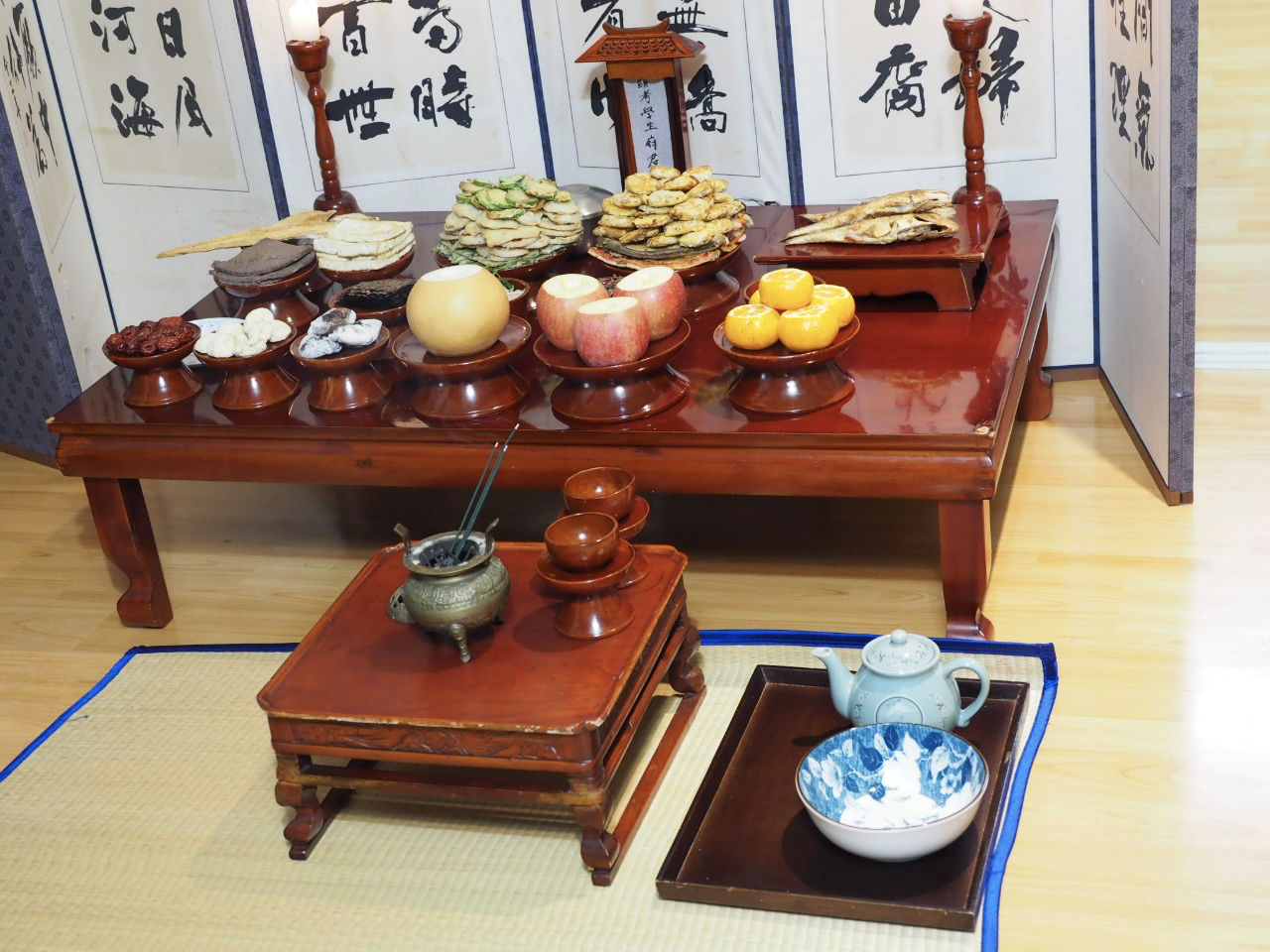 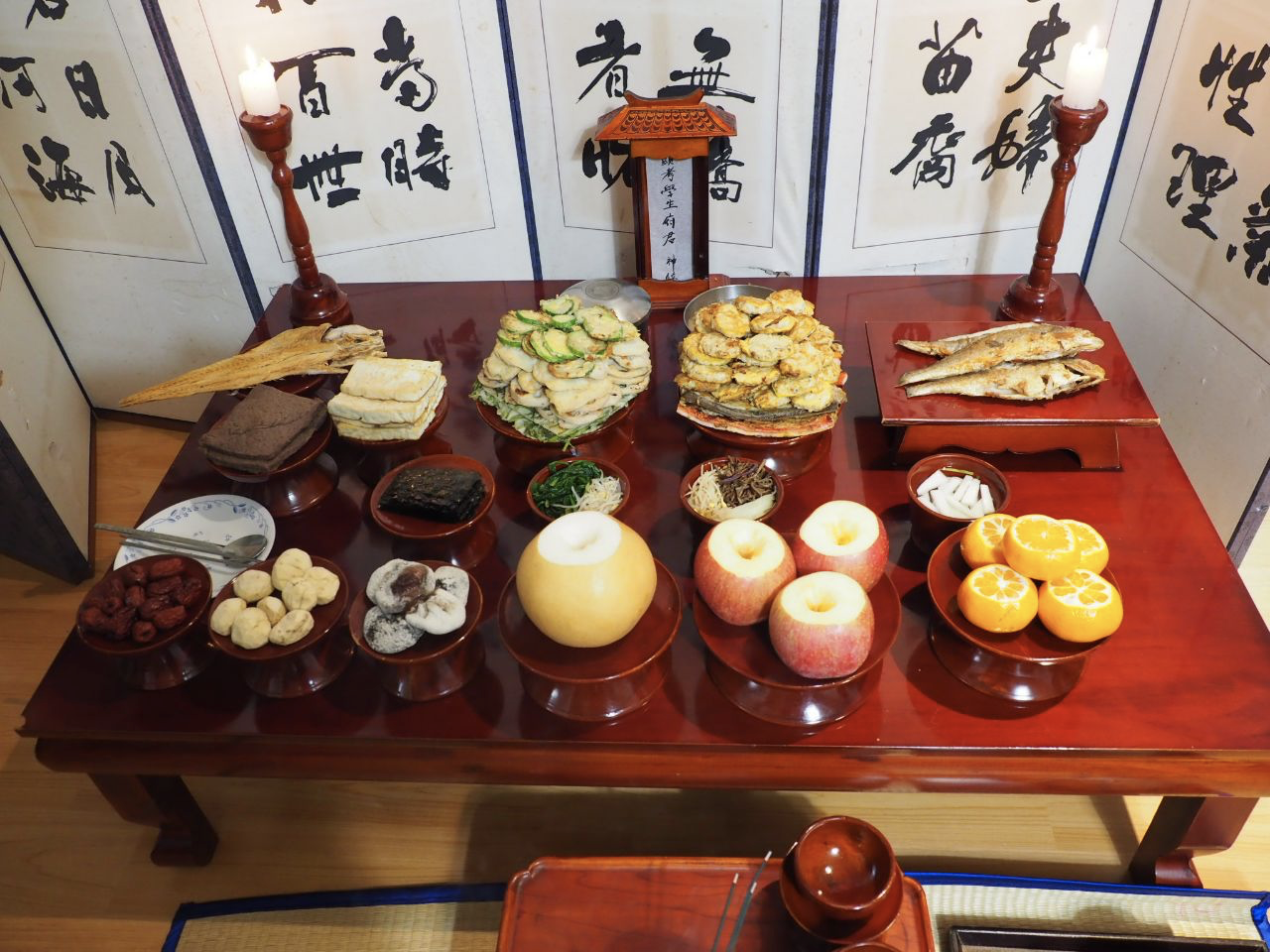 There is a provided procedure for the ceremony

The ceremony is a kinds of the invitation for the ancestors

With Rice wine and Bow, we need to show our respect to the ancestors. 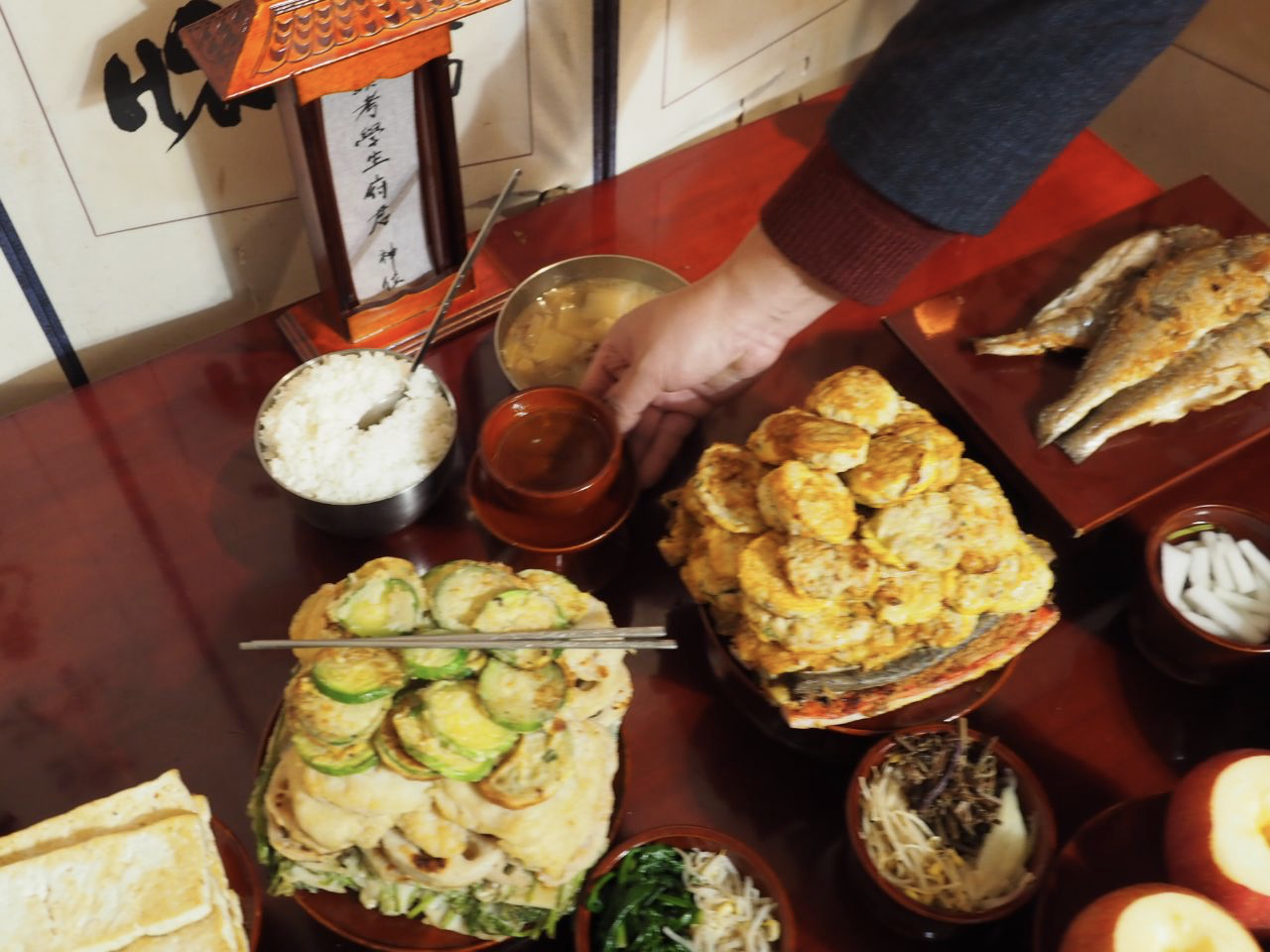 Last procedure is burning the paper for the invitation of my father. 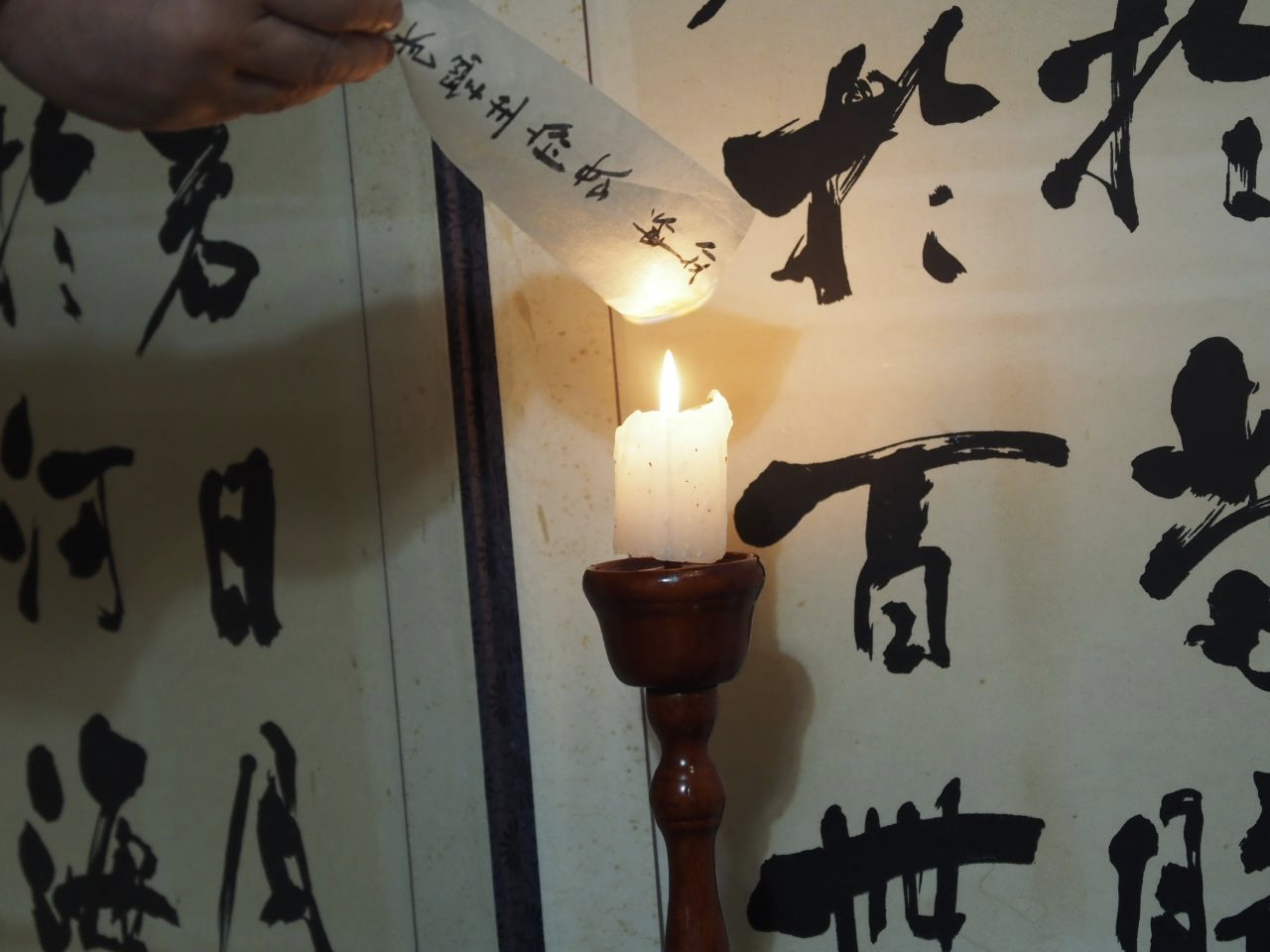 Burning that paper is as same as saying a good bye to my father's soul.

For long time ago, they really believed in that this paper would invite the soul of family ancestors.

Oh. Cool photo. Thanks for your sharing.

Give my greatest respect to your father and your family.May you safe and healthy forever. thanks for sharing.

This is a fantastic post! Thank you for inviting us to join you for this ceremony, and teaching us a little about the culture and tradition.

Your father's memory will live on forever on the steem blockchain.

My thoughts exactly. What a wonderful post. Respect to your father and ancestors @slowwalker.

Reading your post I think it's really a touching ceremony. From to cook food to the burned paper to say goodby, it's all very touching. I think to know the tradition on how to "remember" our ancestors is one of the most interesting thing in every culture and It's touching for me to see how much love you show for your ancestor.

thank you
but now it is changing now even in korea

Always love and stay with your family guys.
peace and love for you @slowwalker.

Sorry for your lost

Stay strong my friend, stop grieving after him, but never forget him!

when I was young, whenever my father burn that paper at the end of ceremony, I worried that my father's hand might be burnt.

Merry Christmas all the best wishes to you @slowwalker

nice work hopefully we make same you for one post

Because you took the time to remember and reflect, you did invite the souls of your family back. That is what it takes. If we just go on down every road and through every door opened to us without taking time for pause we lose the soul of what family and other humans all hold dear in the best and worst of times.

I'm new here. I don't know anything or anyone. can you help me, please?
Also Please like my post,please vote,comments and resteem it.

It makes me smile to see other people are still practicing their culture and tradition. My Father passed away on 22 December 2007 , and it's just a different day for the family and we all have something we do to remember them by. Bless you for this wonderful post :)

yes.
every people has it's own unique tradition

Love and respect for your family. Nice ceremony and pictures. Keep enjoying.

Thank u so much for showing us the tradition that u n Ur family r following...

may mom did lol

thank you so much
have a merry christmas

I'm very sorry for your loss. It's been 10 years since my mother passed and it isn't much easier. Many blessings of peace, abundance, and liberty to your home and family.

Lavish people,
Do not vote for yourself,
Expecting from other people,
You know
If something is to give something,

This is a difficult time for people that have lost loved ones. Tanks for sharing this tradition and personal ceremony with us. I hope you and your mum have a good Christmas and recollect some wonderful memories.

wow..you seems to be an expert of cooking..amazing to see these traditional meals..thanks for sharing these photos with us :)

You are a great son!

Wonderfull, its so amazing 😍

Merry Christmas, and what a great tradition you have, my friend. Thank you so much for sharing it with us here on steemit

Really authentic!! thank you for sharing!

Photo of Korean culture.
I always look good.
Merry Christmas all the best wishes to you @slowwalker
:)

every country must have its own culture and almost all countries commemorate the year of the dead, my friend's post is very impressed

your welcome my friend

@slowwalker i must say the photographs are super awesome

Nice post keep it up
Hello steem mates, we're new to this plat form and we find it good to shear ideas with each others.

May be only few people's may have heard about DHL, so Pls to know more bout us kindly check out for us thank you

Photo of Korean culture.
Thank you for always
Merry Christmas all the best wishes to you @slowwalker

Thank you for sharing this. lovely!

@slowwalker i am sorry to hear of your very sad loss . this ritual cermony sounds like a great way to help deal with passing i a hope you have a very merry xmas

Is it true?? I have thought China also has served like us :ㅇ

as far as I have heard, there is no more ceremony like that in main land china

I didn't know it. I just got to know they don't do anymore.

Thank you so much for sharing your lovely honoring ceremony and letting us into a special space in your life and heart! I hold ceremony close to my life, as I try to make every day ceremonial in its own ways, I come from Native American descant so honoring myself, family and our Mother Earth is a part of my life. I love that your mother is catholic but still honors and puts her heart into the ceremony... Cheers to life and the never ending flow of energy!

This is a traditional ceremony of Korea as well as some parts of East Asia where they follows Confucianism to show respect to the ancestor and family. Thanks for sharing the interesting East Asian culture to the foreigners :) This is somewhat they are really interested in. I also share some Korean traditional cultures to foreigners when I am with them. When they hear it, sometimes they reveal that they can't believe what I just said. Since the globe is big, and we all have different culutral value from time to time, and place to place, I hope Steemit becomes a platform where we can communicate and share about our lives and culture :)

I hope you are doing well all of the time !

My father passed away last June 11, 2015 and it's really hard to accept the fact that he is not here anymore. Especially on occasions like this (Christmas).

We have different beliefs and culture but there's one thing that we all have in common. RESPECT.

I was so amazed! I wonder how Koreans' Chinese New Year would be. Thank you for sharing with me the Confucian one. I can feel the love and respect in your family as well. Thank you very much.

Family ancestor ceremony is always done by families who are left to commemorate the spirit of his body, according to their respective beliefs and customs of a place ..

The rite acts as a bridge to maintain the relationship with family today. It is a day when relatives living in a faraway land gather to honor their ancestors. Happy New Year.^^

Thanks for sharing, even visited several countries each country has different culture for their family ancestors. I also agree with that, the Korean has a unique culture.

d job
Have a nice day
FUND me

What a marvelous ceremony, you are so lucky to have a mother like him and you are also very lucky to have a very good father.
Although it's dead but you always remember him ..
good luck @slowwalker

Congratulations to your mother who did this ceremony. It shows respect for the forefathers and being. I wish you a beautiful life.

Thanks for sharing this post. By this you have enlightened us of some aspect of korean culture that we did not know before. Pls. Post more. I follow and upvote you.

"December 19 was 3rd years aniversary since my dadd had passed away. I can’t believe that my dad does not exist in this world. I still remember his voice, his face and his silly humor…" For our family it was already the second Christmas without my dear father. He left us too early, but he will always be part of the family. His laughter accompanies us every day and we all carry his happiness in our hearts....

I miss my father

every person who died there will be an annual commemorative, the spirit of friends

traditions and legacy are everything that makes us now.

I am sorry for your dad. Thanks for sharing you umique ceremony. Wishing all of you a joyous Christmas. A little smile, a word of cheer a bit of love a little gift from one held dear…

Even if one is converted into another religion, it does not prevent us from preserving our traditions and our culture which are essential components of our identity and our history.Marry chrismas @slowwalker

what Nicely traditional photography!!
really awsome..
Some people are so fortunate to see that they have such power
And I wonder if this man got a lot of getting a vote,
I have come to you with many hopes, please do not disappoint me, please, a little help,

feel closer to you. thanks
you are my 1st following person.^0^
i believe your father is protecting you ^0^

Wow, this is a nice share.
Now, I know something about Korean

your story is awesome i would like to learn from you sir are awesome and your photos you can check my work also https://steemit.com/smartphonephotography/@hamzaatiq/hello-winter-or-the-feeling-of-loneliness-instant-photography

I'm sorry about your father...Thanks for sharing with us those amazing photos! I never heard anything about this ceremony (especially abou burned paper). Just keep it up!! Thanks, again!

That great custom .. Jst like us here in Africa...is what made us who we re..our pride n image..

Thank you for inviting us to this private ceremony. I love the idea behind these traditions and that your father's memory will live on via this platform. I wish you and your family all the best!

Thanks for sharing the ceremony!

I’m sorry about your father. Your English is fine though. I only wish that I’d learned another language, but it looks like I may be English only my entire life. Can’t eveb imagine trying to interact with a primarily site!

I really love korea, i wacht a lot of korean dramas and I love kpop as EXO,BTS,Wanna one,Big bang, and SHINee yesterday just lost a member of the jonghyun 😭😭 so sad to hear the news, I from indonesia