So after many years I decided to dig out my original Atari 800 computer that I used to develop Atari games on. I don't know why I recorded the below video at this angle. Let's just call it the "classic" view. But here I show my original Atari 800 and play a few games I created that I haven't played in a very long time.

With the rise of gaming came the reviews in the magazines. It was fun seeing my name in print. Here is just one of many reviews that was from Softline magazine in 1982. 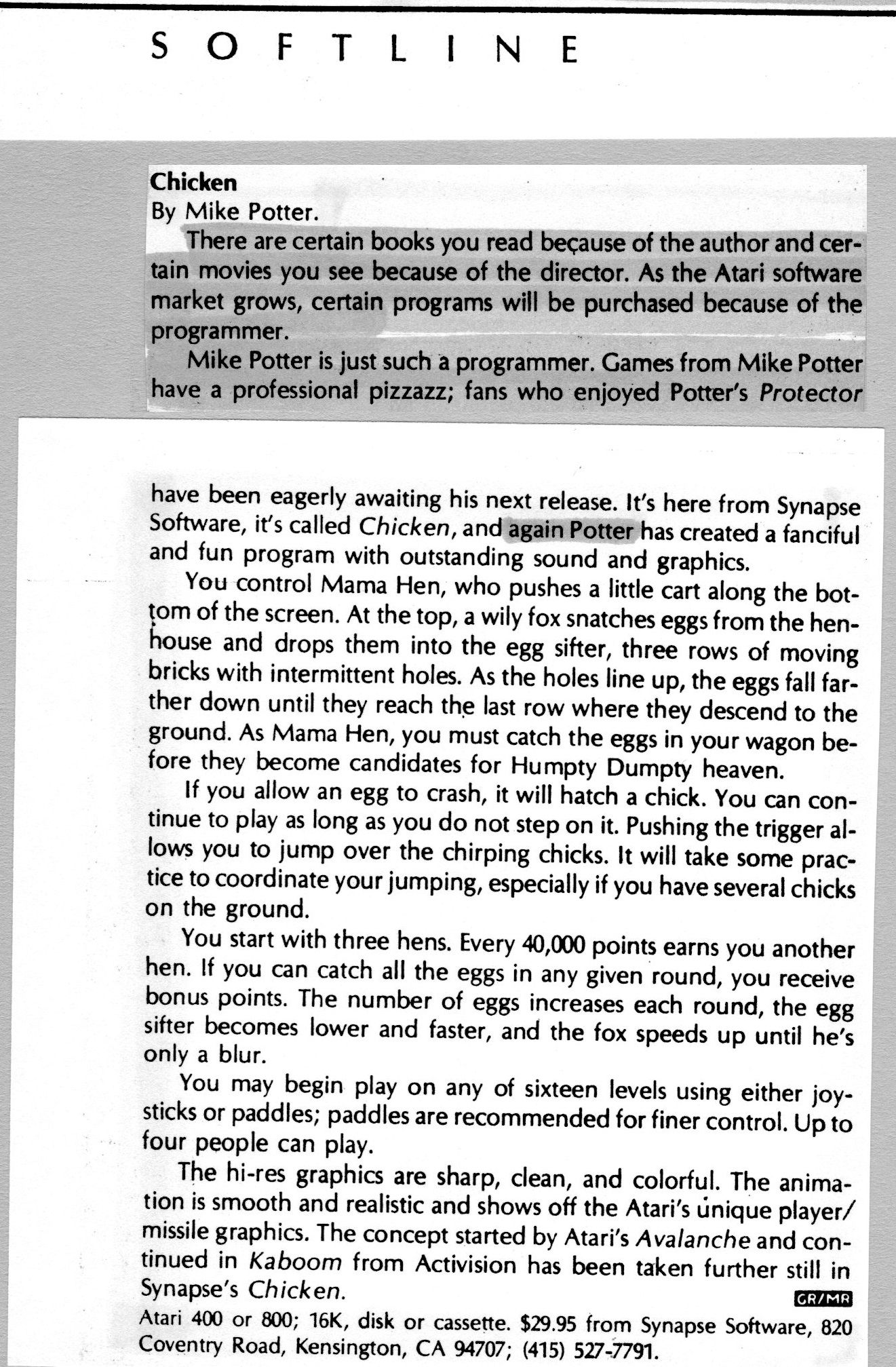 Yes I know these are so basic compared to today's games and I'm certainly amazed at what today's programmers can do.

With all the piracy the game market died around 1984 then with the rise of IBM compatibles I moved on to educational software then to business software, creating Video Store and Hotel management software to creating QuickPay for Quicken and in 1999 I created AuctionTamer which I'm still selling and supporting after 18 years.

To see my full story see my introduction post.

What an adventure these last 37 years have been.

This is sooo cool. Im honored to be one of your followers.

You sir were in this creating value very early on Salute!

Thank you @sneakgeekz, that is very kind of you.

Yeah no problem you deserve it brother.

Wow... That's interesting that you still have all that with you...
Way to go...
@pocketechange

I'm amazed that it still worked. I did have to hotwire a new start button but the drive still read the games on the floppy disks.

It's great that you were able to hold onto it for so long...
@pocketechange

Our family's first computer was an Amstrad CPC 6128 in 1986 or 87, I think. We used to go the library on weekends and borrow computer programming books and type in the (very basic) programs in BASIC.

One of our favourite self-typed programs was Bomber. A plane flew across the screen over tall buildings and you could press the space bar to drop a bomb, which would destroy the top of the building. You could only drop one bomb and the time, and the plane would circle across the screen getting lower each time and faster as the game progressed. If you didn't drop the bomb at the right time and descended sooner the you destroyed the building you crashed into them.

Our computer had a 3.25 inch disk drive, so we could save the programs onto, which was a lot quicker than the CPC 464, which inly had a tape drive. We did buy a few programs on tape from a local department store and loaded them onto the computer with a cassette radio and an adapter cable.

Those were the days for a nerdy child!

I remember that bomber game. It was fun. It is amazing how far we have come and just think where we will be in another 30 years. Actually another 2 years will be mind blowing.

I think it came in the appendix of the computer manual. Mum typed it in one day while we were at school for us to play when we got home.

You are right. All this seems so basic these days, but it was all very cool and exciting back in the day.

I think I remember that game or a game like it on intelivision. It was the first time a game talked. It said, " B-52 bomber" in the intro. Me and my brother were like , holy shit!!! The game is talking!

This one didn't talk. Far too basic (BASIC) for that.

Being a huge gamer myself and working in the gaming industry, this is amazing to see. I hope that there's more awesome content in the vault and that you post more of it in the near future. You now have a new follower :)

Thanks @jackthar1ppir I will do my best in bringing out more items from the vault. :)

Hi, i'm new here. You can check my posts about food, travel and random stuff. Follow me and i'll follow you back, enjoy!! :)