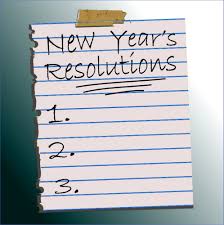 One ritual that is always a part of the activities that characterizes the new year celebrations. A time for self reflection that often results with setting new goals and defining new visions for ourselves based on the outcome of the year in retrospect.
In case that not good enough to describe new year resolutions, here's what Wikipedia has to say about it

"A New Year's resolution is a tradition, most common in the Western Hemisphere but also found in the Eastern Hemisphere, in which a person resolves to change an undesired trait or behavior, to accomplish a personal goal or otherwise improve their life."
Take a deep breath after reading that, what a wonderfully scripted definition, who could come up with something more scholarly. As a matter of fact, this definition reminds me of my days as a university student, where after digesting a concise and accurate definition of a concept, I'll start having those feel-good chemicals going high on me and see me appreciating the scholar I was growing to become.
Back to Reality(Of Course, the title of this post has to do with being realistic)
New Year Resolutions are a great way to start the year. I mean who doesn't want to believe that their past frustrations and misfortunes all ended with the year in retrospect? Certainly not me.
At the beginning of every year, we all need a quick relief for the unaccomplished goals, ideas that were never materialized and visions that were never set in motion. At such point in time "New Year Resolutions" come in handy.

In Reality, New Year Resolutions could cause more harm than good, by hampering the development and improvements that people so crave. I'm not to be misquoted as this doesn't happen all the time, but in most scenarios this is the case. If you set a new year resolutions and have lived up to them. Well, Congratulations! For those that haven't and those that are willing to learn, read on

Most people fail to take cognizance of the fact that by making resolves, solely for the fact that it's a new year and it's time to set goals, you might be on the part to failing at it already.
Don't believe me? Have you ever wondered what makes the difference between you 5 days prior to new year and you on new year eve? Do we mysteriously acquire this super ability that enables us to achieve all the things we couldn't achieve? Don't think so.

These New Year Resolutions will work well if humans were Computers, where you have to use the uninstall tab to get rid of attitudes and behaviors we deem necessary to expunge. Mind you, I wouldn't even have to wait for the new year to take down that alcoholism or other addictions.

The problem with creating new year resolutions is that for humans it takes just more than the fact that, it's a new year to overcome a bad habit, the excitement of making it to the new year alone is not going to help you cure your addiction or fix that area of your life that needs to be worked on.

It takes an enormous amount of determination and drive which all results from desire (how badly we want to get better and improve) to get the ball rolling.
Humans don't unlearn an attitude by just wanting to do so. It takes time to get rid of character traits that were daunting our progress. Plus, we do not have the luxury of feeling the new year vibe everyday, this euphoria of excitement often dissipates after a while.

Okay. Enough with the onslaught of New Year Resolutions.

If you feel the need to make resolutions at the beginning of the year. You should back properly back this up with precise knowledge of what your I against.
Certain questions such as

What is it you want to achieve?
What are the reasons you need to get this done?
What is your motivation for doing this?
Are you willing to pay the price to get it done?

If this is backed up with wisdom, persistence, setting higher standards for yourself, and prayer amongst others. Then, be certain you are going to generate the momentum needed to improve the quality of your life and bring lasting change and happiness to yourself.

Let me take this a step further and say that. In my own opinion, waiting for a new year to accomplish a goal or task is the best way to go. During our waiting period we tend to loose our momentum and diminish our drive.

If you feel there's anything in your life that needs accomplishing,

The only difference between the new year and today is meaning we associate to it.

Take Action today. And do something you've been procrastinating
Everyday is a present.

Hello! It's nice to see you here!

Thanks... Nice to see you too