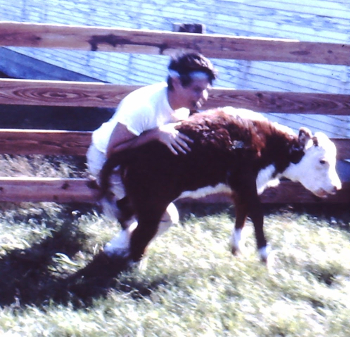 I was also a part-time cowboy while
attending law school in the 1960s.
Corn has been a factor in my life for almost as long as I can remember. One of my earlies memories is from a trip that our family took to my Uncle Ed's farm, down-state in Champaign County, Illinois. The farm was once my grandfather's and is where my mother was born.

I was quite young at the time, and as I remember it, Uncle Ed and I walked into the cornfield behind his house. I remember the corn being a lot taller than me. It was way over my head. And Ed took me out to give me the experience of tasting corn right from the field. It was white sweet corn. Ed pulled off a cob, pealed back the leaves, cleaned away the silken fibers. Then he handed it to me and told me to take a bite. At first I hesitated, because I thought that it had to be cooked, but he insisted. Yet to this day I can almost still taste how sweet and good it was. For some time after that I only wanted raw "field corn" to eat.

The summer after my second year in high school we were living in Rochelle, Illinois, which, at the time, was the Midwest headquarters for the Del Monte Canning Company. It was where most of their peas, corn, and asparagus was grown and canned. My first job at Del Monte was detasseling corn. We would arrive at a field just after sunrise, put on some old, tall rubber boots, and begin walking the fields, pulling the flower tassels out of the waist-high corn to prevent them from pollinating the other plants.

It was hot and miserable work with mud on the ground and bugs in our eyes. We only got paid whatever the minimum wage was at the time, about $1.00 per hour, I think. The days were really long, ten hours was the minimum time per day, and often we worked longer.

It was during this period that I got my first glimpse of what the world is really like. Until then I had been protected from the world by my parents, as most young children were at the time. But now I began spending time in the fields with a crew that was made up with a few other high school students but mainly with migrant workers, most of whom had never completed grammar school. I really learned about the dark side of the world from those young men. At least I learned about how degenerate the world actually was. It was a real eye-opener for an innocent little Catholic boy, and it most definitely marked the end of what I think of as my childhood.

NOTE: This is one of the stories from my new book
The Chronicles of Lorenzo - Volume 1
You may download a free copy of it at
https://lorenzohagerty.com/freebooks/
I have placed this book directly into the Public Domain.
#work #farming #corn #summer
3 years ago in #life by lorenzohagerty (54)
$2.84
3 votes
Reply 1

Thank you for sharing a very interesting life story.