Level easy or adrenaline? Canyoning – a great idea for your free time! (part 2)

Hi there my fellow Steemians!

Today, as promised, I would like to continue the topic of “c-a-n-y-o-n-i-n-g”, but this time more from my perspective so I will share my experiences and tips. 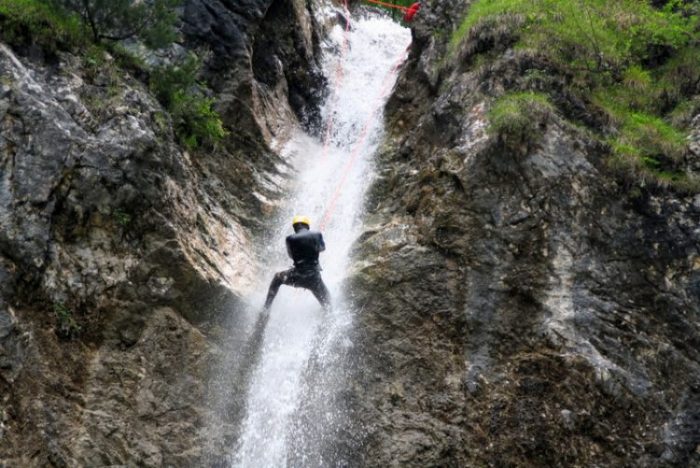 As I have written previously, I have tried canyoning in French Pyrenees-Orientales, near Spanish-French border in August 2017. There are few spots to choose from, depending on your fitness level and how challenging you want your adventure to be. I would describe myself as a sporty person and because I enjoy challenges, I did Canyon du LLech (pronounced “Yeck”). It’s level of difficulty is described as “adrenaline”. Apart from that this canyon is said to be one of the most beautiful and one of the sportiest canyons in France. Yeah! Preparations and some tips for those who, like me, are living in Spain;)

There are Spanish companies that organise that kind of activities mostly for Spaniards. Unfortunately, we called them all and even in the high season, it was difficult to find any that was able to host us. As I speak French I decided to find the French companies. Obviously, it was a good idea ;) because they were operating on a daily basis, twice a day!
It is very important to understand though that France is a quite unique and specific country. It is said that French people are not too good with languages. And although I love my French friends I must agree with this cliché. During the call I explained that I will be accompanied by a Spanish friend who doesn’t speak French. I was reassured that the whole activity will be conducted in English. Nevertheless, once we arrived at the meeting point and were able to meet the other participants, we were welcomed by a very likable guide who, to our surprise (or not?;)), did not speak a word in a language other than French.

I wanted to write you the name of the company but I simply don’t remember and I couldn’t find it on the internet (I suspect they have changed the layout cause none of the pages look familiar). We paid around! (again I don’t remember exactly, this is the price range) 50-60 euro per person for approximately 5 hour long activity. As I’ve mentioned our guide only spoke in French. Furthermore, each participant was promised a variety of photos taken by the organisers. Unfortunately, they forgot! to charge their go pro so no one of the participants had a souvenir. I wouldn’t call this too professional…

After arriving at a starting point all the necessary equipment was distributed. The price included a wetsuit, helmet, harness with tails and gloves. A participant must have had a swimsuit and, most importantly, a pair of baskets. I decided to rent more suitable shoes, shoes from neoprene (used in many kinds of water activities), for an additional price – 5 e.

We descended for about 20 min until we reached a bottom of the Canyon. There were already 2 other groups in front of us! Little crowded I would say - we experienced a queue soon after starting the activity.

During the whole adventure I have experienced:

The jump from 9m was not obligatory and 2 people from my team restrained; personally, I found this jump the most exciting and challenging part of the adventure. I knew I will jump…but those seconds just before the jump, while standing at the edge of the rock. I was simply afraid that I will not do the jump technically correct, which will result in injury.

• SWIMMING ACROSS large and deep basins. What do I think?

Canyoning is not only an activity for adrenaline junkies. As I have mentioned in my previous post, there are various types of Canyons so I have no doubts that you will find something appropriate for you. On the other hand, it is not only about sport. The opportunity to encounter nature in its purest is absolutely one of the kind experience! Personally, I definitely will do it again once the weather will allow me to. And I strongly encourage you to do the same! :)

Nice post! Thanks for sharing. Hope you get the rewards for hard work.

You mentioned this was some time in August, so probably the best time for canyoning.
Hmmm... I should work on my shape for this kind of adventures, and your posts giving me motivation. Keep going ;)

really worth to give it a try:) good luck!

;) I've read that the weight limit for most canyoning tours is 250 pounds;)

I missed waterfalls! Thanks for sharing this awesome post for us. Keep it up and may you have a blessed 2018 :)

thanks and the same to you!:)

It is amazing @k-a-s-i-a , how we can have so much fun and feel so good when we do some outdoor activity, contacting with nature and entering into a kind of balance with the world. I have tried kayaking, snuba diving, scuba diving, rappelling, but definitely nothing like this, it goes to my list of things to do!
You have my follow and upvote!

it's different. but i enjoy all the activities that u have mentioned! :)

such an amazing view ., worths my upvote!

Whoaaa haha this is epic. I have climbing friends who love going out and finding boulders, but after a couple times I realized it wasn't for me. You def have quite a talent there I'd say :) Looks like an intense adrenaline rush, and I'll be quietly hanging out watching from here :)

Damn, climbing up waterfalls? Just kill me instead, cause I'm scared even as I am typing this comment.
Feel free to visit gurara waterfalls here in Nigeria anythime. I would be pleasured to host you in my house.

this is really amazing , cant wait to explore places like this

What a thrill. That's what living in this world is all about.

Looks like a lot of fun combined with exercise and adventure. I will be keeping an eye open for canyoning adventures in the future!

Thank you for the nice post! May I ask you the price for the day of canyoning?

the price was mentioned in the post:) around 50e.

Wow, I’d never heard of canyoning! Going to add this to my bucket list. Thanks for the great share.

I'm an adrenaline junkie so I approve this post :D

for me none represents the easy level, all have a level of physical demand for which I am not prepared but without a doubt, enjoy your photographs very much

take some time and do it in the future:)

So nice that you enjoyed! It is definitly a wonderfull way to get connected to nature and to feel humble and greatfull about life.

Nice, that has been on my list for a long time!