Red Flag Traffic Laws 1865 - it was stupid then. Cryptocurrency is seen stupidly now. Not much has changed.

Horses and wagons. The automobile was invented, and government treated it quite dumb, just like Bitcoin.. 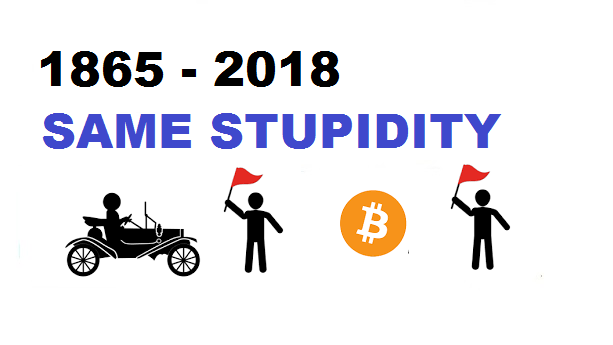 None of us are alive today, to remember what happened when horses and wagons were the primary mode of transportation.

...the automobile was invented. Governments reacted to the "danger"....

You can laugh at that today.

It is completely not funny.

That is the way government acts when it has to regulate something new, that can change the world, and they rush to make regulations to handle it.

Imagine that... you'd have to walk ahead of an automobile, waving a red flag, warning that it is coming....

That made sense to legislators at the time. They made a law that you had to abide by...

...and it was a REAL law, and there were penalties for going against it.

Now it isn't 1865 anymore, and we're not dealing with the invention of the automobile anymore...

But in 2018, legislators, bankers, and those that govern money today are acting equally as stupid as the way we thought in 1865. It's hard to believe that in the last 153 years... we've learned absolutely nothing.

Bitcoin is a new way of conducting financial transactions. It's faster, cheaper, and allows the general everyday citizen to use it.

What do they want to do?

...that's right. They want to WARN the public, that cryptocurrency is unsafe. It's used by druggies, terrorists and scammers. We need a red flag waving person everywhere it goes.... just like 1865

I'm serious. It happened then, and it is happening right now with cryptocurrency.

Regulators in charge of charting the future of their country are acting like monkeys trying to fit square objects into round holes. .... and when they don't get it right, they're just going to be aggressive about it. 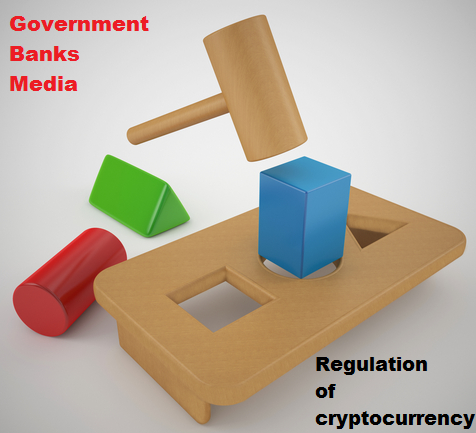 I understand why they are doing it. Peer pressure. The banking cartel... and the way it works... there is a lot of pressure there... STOP cryptocurrency. This eats our lunch for us. Just because it is faster, cheaper, better, doesn't mean this invention is any good.

Just as stupid as it was, with the invention of the automobile to try and require people to walk ahead of the vehicle waving red flags...

...is as stupid as it is to approach the development of cryptocurrency and "trustless" blockchain technologies the same way.

You can't stop worldwide progress. It's going to happen anyway.

Now if you are one of those secret government regulators who read my blogs.. I want to tell you something...

IF you do not find a way to adopt and embrace cryptocurrency before other countries do, then what is going to happen is you're going to create innovation and wealth in other countries than your own. Not only are you going to affect the way your country can compete, you'll be doing a disservice to your citizens, your homeland business, and your overall wealth to your country.

.
.
...so get on the cryptocurrency train and allow innovation.. embrace it. It's not going to stop. Just like the automobile never stopped. Do all the red flagging you want. This is worldwide innovation at its finest. Think outside of the box and find a way to allow this innovation to flourish and stop trying to scare the public. It does not matter how hard you try... it's not working and won't work.

.
.
So do the best you can for your government and your constituents and business... embrace cryptocurrency and make regulations that support the legitimate use of it.

..if you don't. Other countries will. You'll pay the penalty for that...

Really now i am soundless reading your post. Although This is the unpleasant for us but it is truth. But what can do? Yes we can do many things to live flow of cryptocurrency. We all have to take step from own place. We have to ensure legitimate use of it. If we all act together we will be success. Someone never prevent our step if we are active in this platform.

Just as stupid as it was, with the invention of the automobile to try and require people to walk ahead of the vehicle waving red flags...

...is as stupid as it is to approach the development of cryptocurrency and "trustless" blockchain technologies the same way.

Definitely a game changer for the world, though most of it is lacking in bits and pieces. i see massive acceptance in the coming future, and possibly a central currency. I don't think it will be bitcoin though. the aim of micro payment is defeated with its transaction fees.

Good luck with that, trying to onboard Professional Liars, Kidnappers, Torturers, Murderers, Pimps and Pedophiles, Eugenics and Extortionists to a system that makes an IMMUTABLE-RECORD of everything and anything. The people that see the merits of Trustless, transparent and decentralized, record are going to adapt it, the only way the bankers could adapt that would be to create a new coin and vouch .. O shit, they have nothing to vouch! As the memo from BOA read "we may already be too late at the blockchain thing", and I don't believe they were talking about onboarding it even if it was in the discussion, they are too late to subvert it, what would the corporate fraud that is BOA and every other fractional reserve institution do with it besides make a private diary of their schemes?

Definitely countries adopting them late will be at a loss. Anyways it will take time to spread the awareness and do's and dont's of using Cryptos. So earlier the better. That money spent on banks can be spent for good cause, may be towards global warming or innovating a natural source fuel.

It's hard to believe that in the last 153 years... we've learned absolutely nothing.

History repeats itself, not a surprise to me anymore. Look at the wars we had and ones that are happening now. Pretty sad. We just better not be them and get out of the stupidity when it comes to cryptocurrency and fully embrace it. Thanks.

What a nice article! I really hope that Indian govt adopt and regularize cryptos in coming budget by regulating it properly.

Govt is the biggest counterfeiting system... They want to get their own asses to buff only... Cryptocurrencies are going great guns and they can't stop it... It will flourish anyway..

Really when something is new people who don't understand it, criticise it, and with time they get used to it, same is the case with crypto

Trust me there will be a time when no one would think crypto as a new thing. It would become the same old stuff around. Change is important, we must accept change. And as of now crypto is the change.

the future is in cryptocurrencies

People Don't realise this but ups and downs are the base of market and no currency can always show upward trend, it has to fall someday. We just need to have patience and confidence in our investment and wait for the perfect moment to grab this opportunity. Rather try a risk than live a mediocre live. When crypto shows and upward trend all these people who are saying "wow I said its a trap! It's a pyramid scheme.." will say "well I know this was gonna happen. I know BTC has the potential" that's what people do they change.

I would resteem, but then those secret government regulators would know who I am, too. I can't allow that.

Crap, by commenting on this post, they'll be onto me also!

Must delete... Ugh, it's a Blockchain, you can't delete it.. this comment will always exist... Well, I guess I'm outed forever now... just like anyone who uses cryptocurrency.. hmm...

There is nothing to be ashamed of here. Having an opinion isn't illegal.

For future viewers: price of bitcoin at the moment of posting is 9417.60USD

Red Flag Traffic Law 1865 - when it was stupid. Cryptocurrency looks stupid now. Not much has changed.

On the one hand I like the article's comparison to the red flag law, and it is an excellent analogy. However, so often I read articles similar to this that appear to be appealing to "authorities" to "do the right thing". IMO such articles miss the underlying reality that those authorities are not the top of the control pyramid and those who are calling the shots are psychopaths and sociopaths who lack the capacity for empathy and who's agenda is contrary to the well being of the planet. Such appeals are akin to flaying at the branches of a tree to bring it down.

Few seem to be focused on the trunk or roots, i.e. in identifying and dealing with the actual causes of tyranny and destruction in the world. Thankfully some are, such as Dana Edwards and Stephan Molyneux, who focus on how children are parented and how crucial not teaching them violence as a solution to problems is.

More abstractly but also addressing the "root" causes of societal breakdown and tyranny is the work by Larken Rose, who's book The Most Dangerous Superstition explains with factual clarity how belief in authority is the means by which the most egregious atrocities of humanity are carried out.