DRUGS: An exploration of a misleading concept - Part 1

gneelle5-ht2a (25)in #life • 2 years ago (edited)
Today, I want to begin an exploration of the concept of “drugs” and how misleading and deceptive the word can be, whether intentionally or accidentally so. I’ll start with a venture into my memories and try to remember, from a perspective of me as a child and teenager, how the whole “drugs” notion is being gradually formed in a person’s worldview starting from childhood. Of course, I will draw from my personal experience, and your mileage may vary greatly – time period, geophysical location and cultural tendencies do matter. But I still think there’s at least some common ground to be found between our circumstances. The only things I knew about “drugs” in my childhood is that they are inherently bad, they have something to do with needles and that some suspicious people on the streets could give you the first dose for free. What we were told in school was that the only psychological effect “drugs” have on you is providing instant happiness on demand. So much so that you cannot but yearn for the feeling when it’s gone, for nothing can ever match it in your “clean” life of sobriety and social responsibility. This inability to be as happy in an ordinary state of existence as you were under the influence of “drugs” leads you to a mode of thought revolving solely around the craving of more. Eventually, you yield. The more you take, the more it takes from you. At some point of time, you’re not you anymore, you’re not in control, you’re not sane, you’re practically not human. And you also become physically ill - everyone knows it’s bad.
You don’t want to be like that, do you? Frankly, only stupid people take drugs knowing all this. But you’re a smart kid, so don’t do drugs, okay?
The seed for a particular point of view was planted – drugs are bad. They are, practically, the bane of humanity. I would never indulge in such debauchery. After all, composure and rationality is ever-important. As a grandchild of a professor of mathematics and physics, I should understand that. 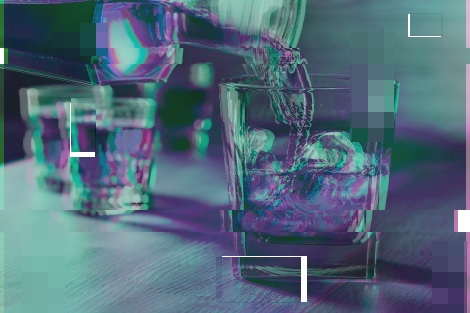 What I didn’t understand, though, is why people drink alcohol. ‘It’s basically like drugs, but a bit “easier” on you?’, I wondered. It was addressed in the school program and the general social attitude that alcohol and smoking are bad - the black lungs, the failing liver and such. But they were still there, produced and used in abundance.
I could see people change under the influence of alcohol. Even with a little amount of it in their systems, they became louder, more obnoxious and more prone of asking you meaningless embarrassing questions. I hated that, especially when such changes occurred in my relatives. And don’t get me wrong, neither my parents nor grandparents were abusing alcohol. Far from it, they drank on rather rare occasions. But, it’s just that… I was a quiet kid. Shy, somewhat introverted. I didn’t like the loudness.
I was seemingly the only kid around who didn’t recklessly throw jokes at passing-by drunkards or mock them in any way – instead, I felt fear being around them. I didn’t know what to expect from such people. They’re not in control, they could do anything at any second. Later on, of course, I started gradually realizing that individuals experiencing extreme stages of inebriation are rather harmless when it comes to physical violence. After all, their reflexes and mind-body coordination are rendered almost non-existent. Nevertheless, on a much more felt, emotional level, I was still unable to escape from the uneasiness and the aura of abstract, impending threat that seemingly surrounded the inebriated, the drunk, the alcoholic.
I was wondering – why is alcohol even accessible so freely? Wouldn’t it be better if there was no alcohol around whatsoever? And cigarettes. At the time, they were a craze in the area in which I live. It seemed like a good half of the city's population smoked (I'm talking mostly about adults, of course). My father did, too - and from the age 15. Everyone knew smoking was bad. Everyone wanted to quit. But they didn’t - they either couldn't or din't want to.
It was baffling – why would you do this? Haven’t you seen the pictures of charred lungs? You’re telling me not to indulge into destructive behaviors and, yet, you do it yourself. It all seemed completely backwards.
Of course, later the smoking epidemic died out for good, people started quitting, less people took on the habit. A lot of gratitude in this regard seems to go to the health campaigns, which helped making the connection in people’s minds between smoking and cancer. My father quit, too, after more than two decades of damage to health and budget – with the help and support found in religion (at least, for some time).

Later in the school courses, somewhere in the books, the following information was presented to me: alcohol and nicotine are drugs. Not only that, caffeine is up there in the list. Astounded, I thought – ‘So, you’re telling me, tea is a drug? Our cafeteria sells drugs?’. Granted, I did not really go on quitting tea and rejecting it as dangerous – I just couldn’t see the negative effects appearing from ingestion of tea neither in myself nor in the others, and no such effects were described anywhere. I still didn’t drink coffee, though. I knew It contained much more caffeine and could make you kind of addicted.
The confusing part was – they still used the same word for these substances. Drugs. Well, to be more accurate, the words used were “narcotic” or “narcotic substance”, but, accounting for the linguistic difference (my native languages are Ukrainian and Russian), I think that “drug” would be a better choice here due to its connotation and frequency of use.
So, to be clear, caffeine was put into the same category as alcohol or, even more strikingly, cocaine. Of course, individual names weren’t ever given to the oh-so-dreaded “drugs” in school literature – you could only really hear the scary words “cocaine” and “heroin” somewhere in a film (and that’s about far it would ever get). The threat was ominous and almost completely non-discrete. It was impossible to understand where the similarity is between a superiorly common hot beverage enjoyed by everyone and a destructive, dehumanizing, illegal, potentially lethal substance.
However, the “drug” message worked as supposed despite the obvious inconsistencies and lack of definitive information. As I was growing up, I decided more and more firmly that I would never do drugs, and never will I start smoking or drinking. I’m a smart kid, after all! And then, a confirmation of validity and credibility of my thoughts came from a place of emotional dedication and interest – in a form of a professional wrestler named CM Punk, an avid follower of the Straight Edge movement. I was instantly ready to sprinkle a dizzying amount of "sXe" all over my social network accounts and draw crosses on my hands on any good occasion.

And this would last for some time, but not forever.

Thanks for reading!
If you're interested, you can check my tumblr for various visual designs, pixel art and other things I do:
https://5-ht2a.tumblr.com/
Also, I have a YouTube channel where I have uploaded some of my music and miscellaneous videos (still not sure if I'm going to upload them to DTube):
https://www.youtube.com/channel/UCtAF5XPU8UGTWqDc6jd44Mg
My video about DMT: